Home » France » Veules-les-Roses, an undiscovered pearl on the Côte d’Albâtre

The picturesque Veules-les-Roses is an undiscovered gem along the Côte d’Albâtre. This coastal region in Normandy is known for its mighty chalk cliffs. But also for its many cosy places. In our opinion, the picturesque Veules-les-Roses is worth a visit. Although it is a small village with hardly 600 inhabitants, you can enjoy yourself very well for one day. Not for nothing is the village called one of the most beautiful places in all of France. In 2017, Veules-les-Roses was even named the most beautiful village in France. 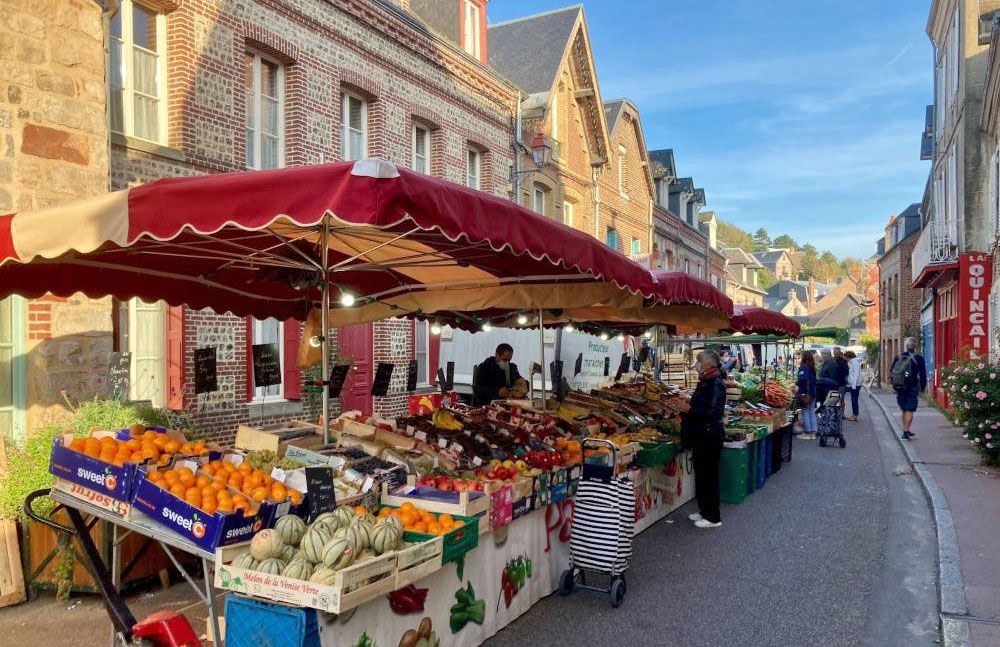 Fishermen’s and weavers’ village of Veules-les-Roses

It is believed that Veules-les-Roses already existed in the 4th century. The name Veules is probably derived from an old English word meaning water spring. In the Middle Ages, the village existed from fishing. It is one of the oldest villages in the region.

Until the 18th century, fishing remained the main source of income. With the rise of spinning mills, the village became prosperous. The sheets and other linen were sold on the market in Rouen. In addition, the farmers threw themselves into the production of rapeseed oil. The streetscape of Veules-les-Roses was dominated by water mills, fishermen’s houses, farms and wash-houses at that time.

Famous writers and artists visited Veules-les-Roses in that period. Like Victor Hugo and Camille Marchand. They found inspiration for their masterpieces there. When Parisian noble circles also discovered the village, it became a small but fashionable seaside resort. In the village, stately villas with large gardens were built. 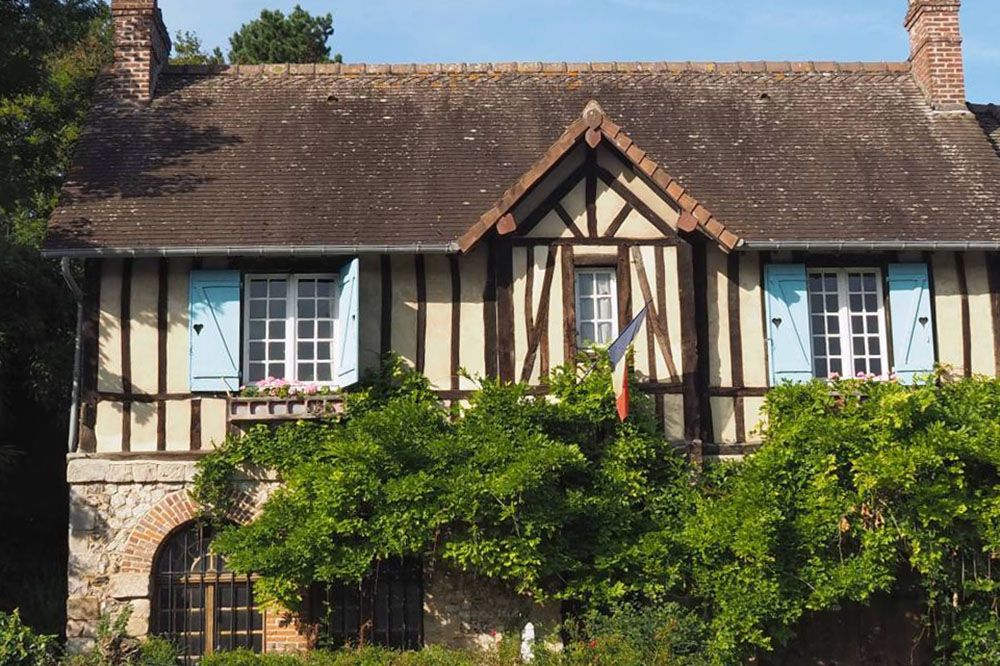 The shortest river in France

The main attraction of the village is the River Veules. With a length of just over 1100 metres, it is the shortest river in France. The Veules rises on the edge of the village. It then flows through the centre of the village. And not much later, the Veules flows into the sea. Thus, the course of the Veules from beginning to end is truly unique.

The name river is perhaps a little too much honour for the Veules. On the day we visit the village, it is more like a quietly babbling brook that flows through the village. Only when the waterwheel is turning is the river a little wilder.

For the first time in our lives, we walked along both riverbeds in one day from start to finish. We had never managed that before. And we will probably stop at this one time in Veules-les-Roses. 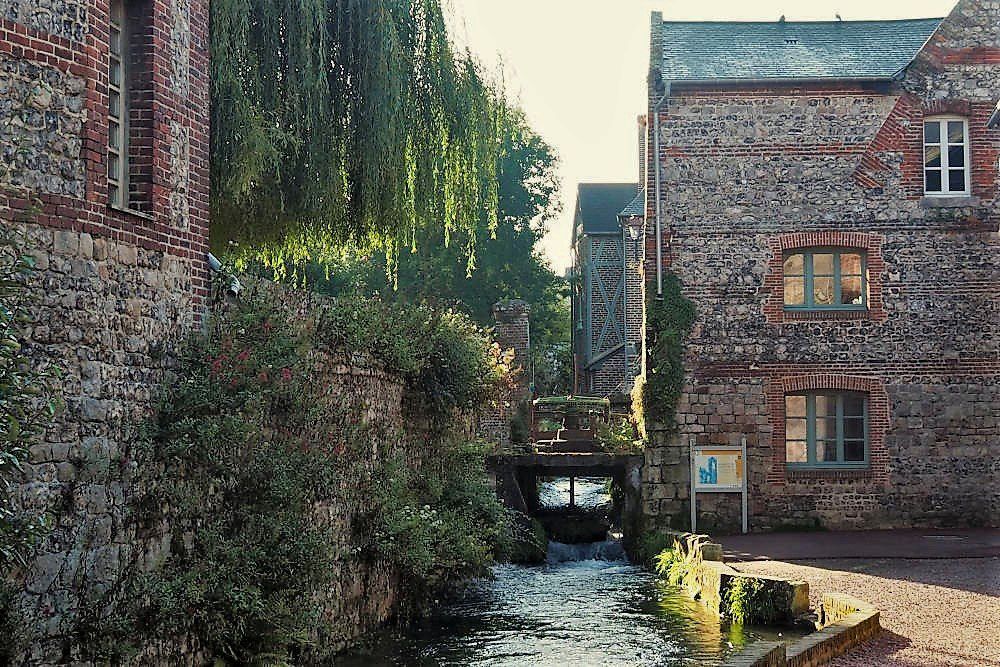 Walk along the sights

At the tourist office in Fecamp we had already received a folder with a walking route to discover Veules-les-Roses. On the morning we arrive at the village, the weekly market also takes place. This makes our visit even more fun and lively. The central square and the main street are bustling with activity. There are many traders with local culinary specialities. But also, various stalls with brocante and antiques.

Of course, we make the walking tour through the village. We pass many special places. The atmosphere and the street scene make it a fascinating walk. These are some of the sights you will encounter on the route. 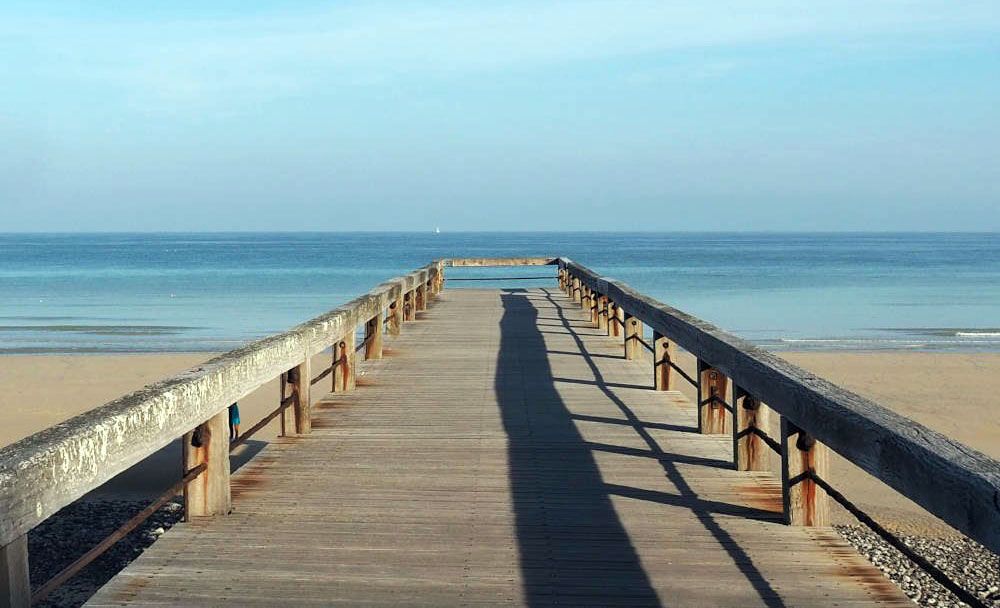 The village has many mills. They are no longer in use. Only one is still in use for grinding grain. But all those mills remind us of the time when they brought prosperity to Veules-les-Roses. Of most of them, only the water wheel remains. Several mills suffered a lot of damage in the Second World War. The market mill was given a turbine over 100 years ago. With it, the mill supplied the village with electricity.

The eye-catcher of the not-so-big central square of Veules-les-Roses is the Saint-Martin church. This intimate church dates from the 12th century. Be sure to take a look inside the church. Because the interior is worthwhile. You will see various statues and paintings. Special are the pillars with the decorated shafts. The church is beautifully restored 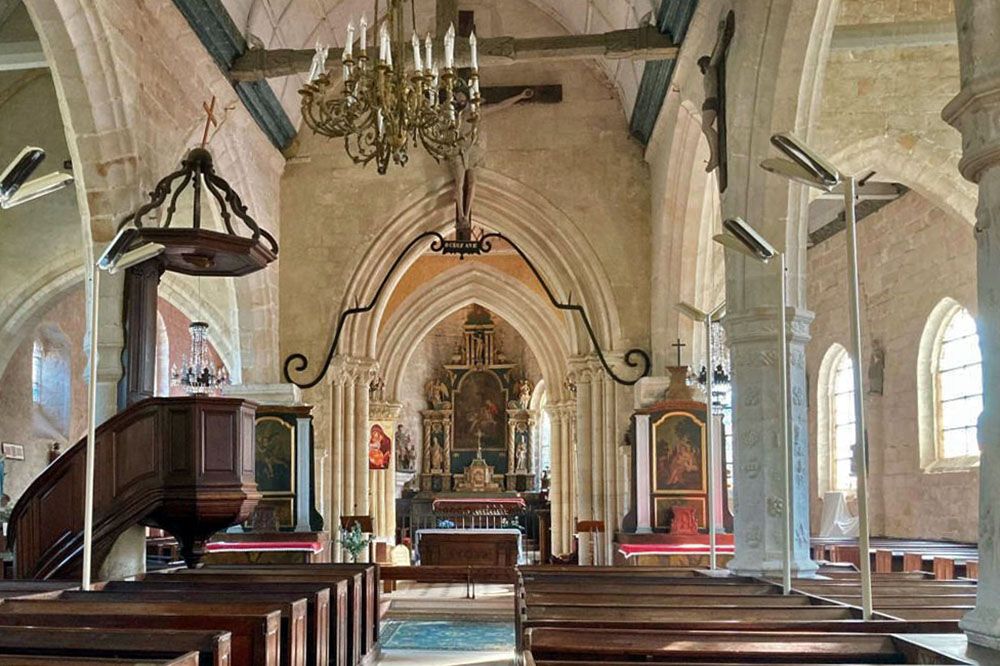 Both north and south of the village are two beautiful viewpoints. Here we can once again see the mighty chalk cliffs for which the region is so famous. And we have a view of the small centre of Veules-les-Roses. Visitors to the market wind their way down the main street past the stalls. We can also see the river from beginning to end; it’s special to be able to catch this in a glance. At the northern viewpoint, we read that this was the site of hard fighting at the beginning of the Second World War.

Along the river and in the streets around it, there are many beautiful houses. Many of these were used as fishermen’s houses. In addition, the village also has stately villas. Many of the houses are half-timbered and perfectly restored. The colourful flowers at each house give Veules-les-Roses a colourful appearance.

Other beautiful places in Veules-les-Roses

On the way, we pass a former chapel of the Order of the Penitents. We can see the remains of the old castle and the ruins of the church of Saint Nicolas. We can see a small area where watercress has been cultivated since the 14th century, near the source of the river. The route is thus a succession of remarkable buildings and sites. But above all, the serenity of this peaceful village makes the walk unique.

After our walk through Veules-les-Roses we settle down on the terrace of the village café. It is busy and cosy. The locals are loudly discussing the latest news with each other. We enjoy the atmosphere in the main street, where traders still try to sell their wares. While enjoying a delicious drink, we come to the conclusion that a visit to this village is really interesting. 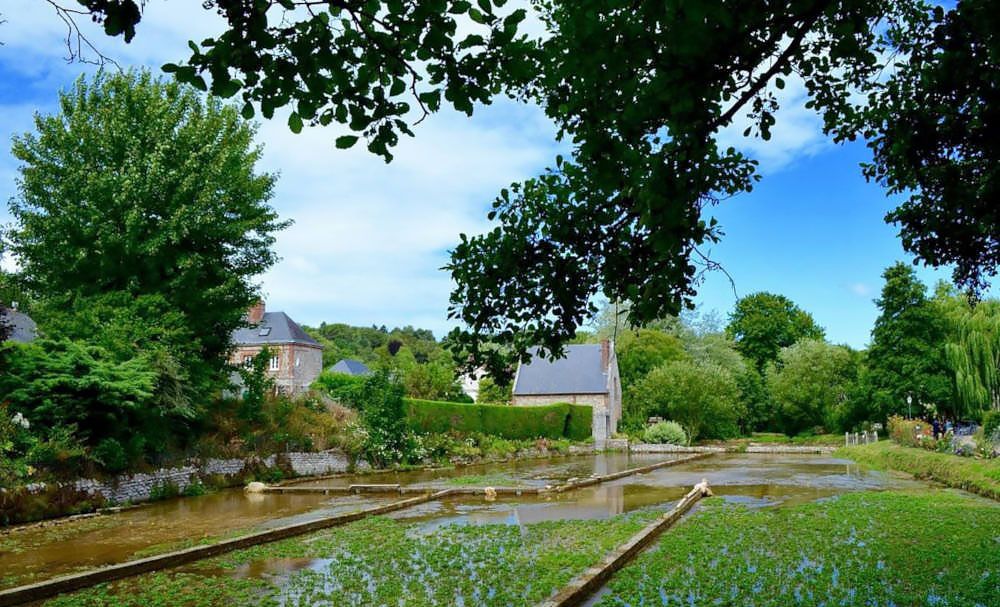 This is what you can do and see in the surroundings of Veules-les-Roses.

The beautiful coastline of the Côte d’Albâtre is easy to visit from Veules-les-Roses. Do you fancy a multi-day hike through this area? Then the GR21 is an ideal route for you. A few years ago, this long-distance footpath was voted the most beautiful in France. It runs all the way from Dieppe to Le Havre (the other way round is also possible of course). 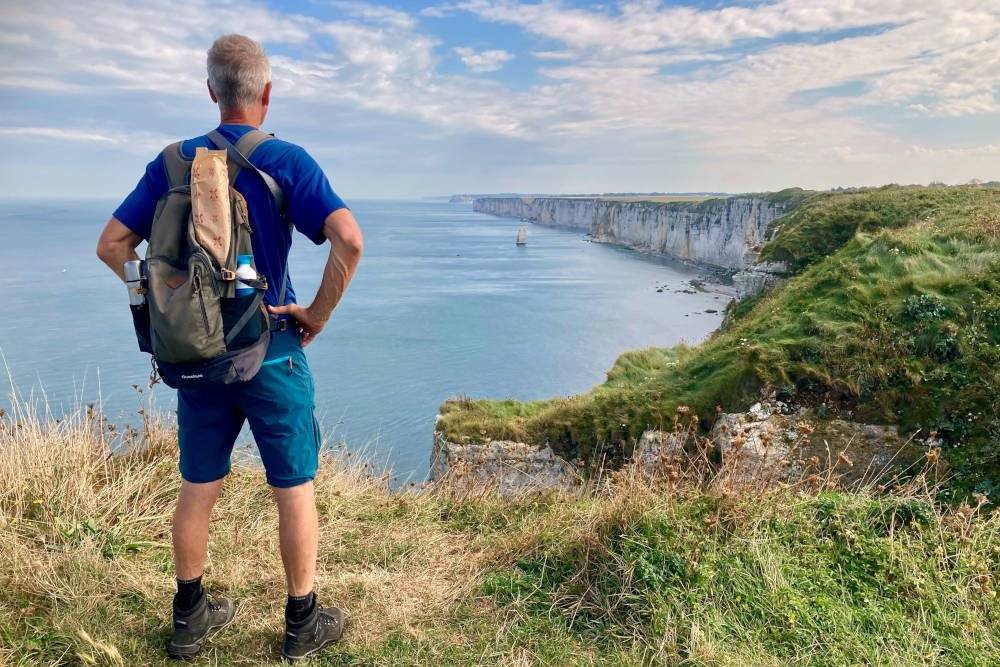 Other lovely places to visit on the Côte d’Albâtre

Not far from Veules-les-Roses there are other beautiful towns and villages. Thus, you can reach Dieppe within half an hour. This was once one of the first seaside resorts in France. In the summer, the Parisians like to go to Dieppe. In the historical centre, there are lovely squares.

Saint-Valery-en-Caux is also nearby. It is a nice harbour town. There are many terraces around the harbours. The Chapelle Notre Dame de Bon Port. and the famous monastery of the Penitents are attractions you do not want to miss.

A bit more to the south is Etretat. This is one of the most visited places in the region. The cosy centre has a beautiful wooden covered market. The most famous chalk cliffs are close to Etretat. They are Falaise d’Aval and l’Aiguille. One looks like an elephant, the other like a big needle piercing the sea.

Find out more about the region in our blog about the Côte d’Albâtre. 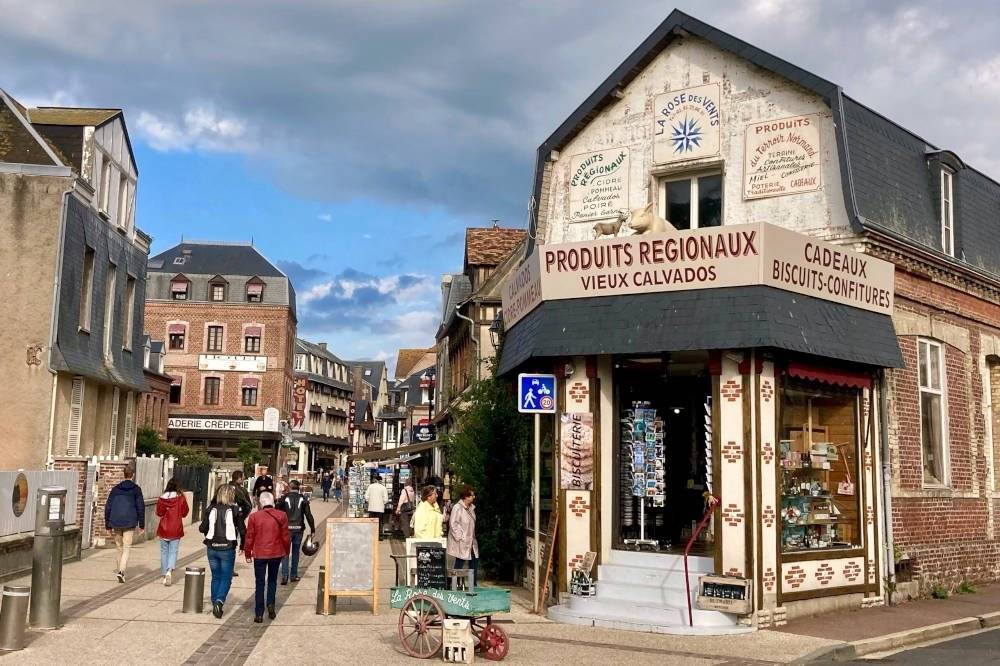 The village of Veules-les-Roses is located on the Côte d'Albâtre (Normandy, France), just southwest of Dieppe.

Where do I park if I want to visit Veules-les-Roses?

The small village avoids car traffic as much as possible. Around Veules-les-Roses there are plenty of large car parks. You can park here for free. Depending on which parking you choose, it takes 5 to 10 minutes to walk to the centre of the village.

How do I get the information about the walk through the village?

The Tourist Office of Veules-les-Roses has produced a leaflet containing the route. The most important sights are mentioned in it. The brochure is in French and English.

The various tourist offices of places in the Côte d'Albâtre certainly have the information too. We got the brochure at the Tourist Information Centre of Fecamp.

Are there any nice restaurants in Veules-les-Roses?

What do you think? On the coast, of course, there are many seafood dishes on the menu. Fish dishes, shellfish and other seafood predominate.

This is an overview of restaurants in Veules-les-Roses.

Can I stay overnight in Veules-les-Roses?

There are no real hotels in the village. Fortunately, Veules-les-Roses does have some charming bed & breakfasts. These are the possibilities for an overnight stay in Veules-les-Roses or its immediate surroundings. 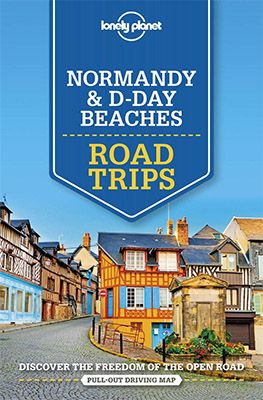 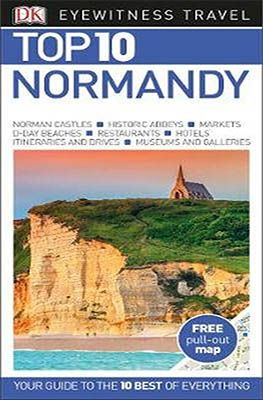