Leuven (or Louvain in French) is an absolutely delightful student city, only half an hour away from Brussels. My wife had an internship there a long time ago. Out of nostalgia, we’ve been back there several times. Recently, we were there again, but with friends. It was only then that we really started exploring the city. With our travel guide in hand, we strolled through what is perhaps Belgium’s most beautiful old city centre. We discovered not only the most beautiful spots, but also the best terraces!

In this blog you will find the highlights of Belgium’s beer capital, which you simply must see. But first we’ll take you back to the year 884. In that year, the Vikings settled around Lovon, an old fortress on the river Dijle. 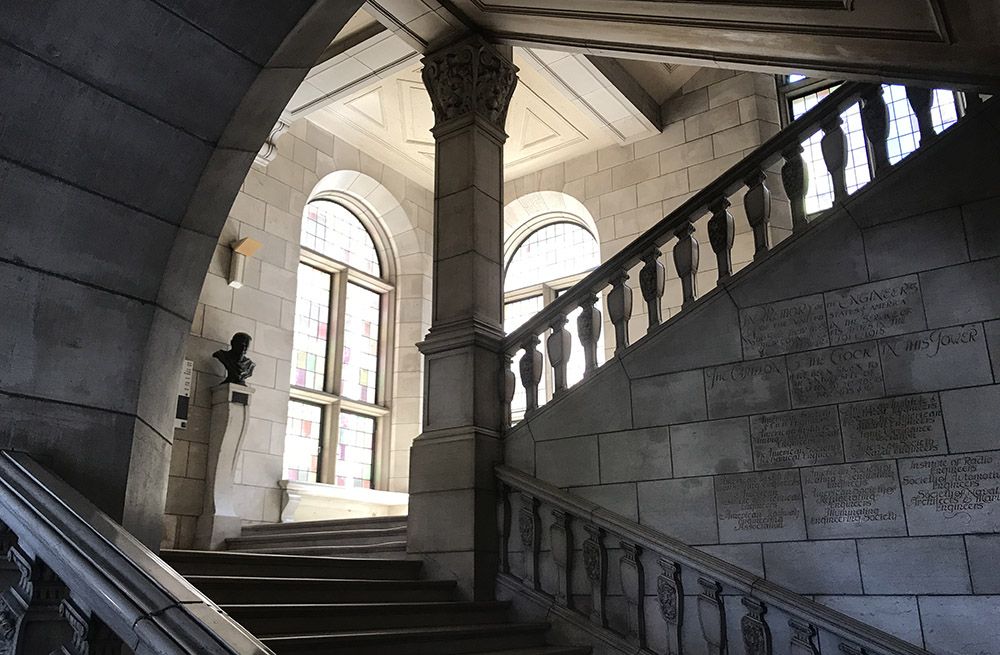 After the Vikings were defeated in 891, Leuven became the home of the Counts of Leuven. The town then became an important administrative and commercial centre. Leuven then literally and figuratively ruled the region for hundreds of years. In the 14th century, however, Brussels became the capital of the Duchy of Brabant. Leuven’s cloth trade then largely collapsed.

What finally helped Leuven back on its feet was the foundation of the university in 1425. Enlighteners, including Erasmus, studied or taught there. In the 18th century a somewhat larger brewery was established on the outskirts of town. This brewery brought a new economic revival to the city. However, it is still the university that gives Leuven its special character. And for us, one of the reasons to return regularly. 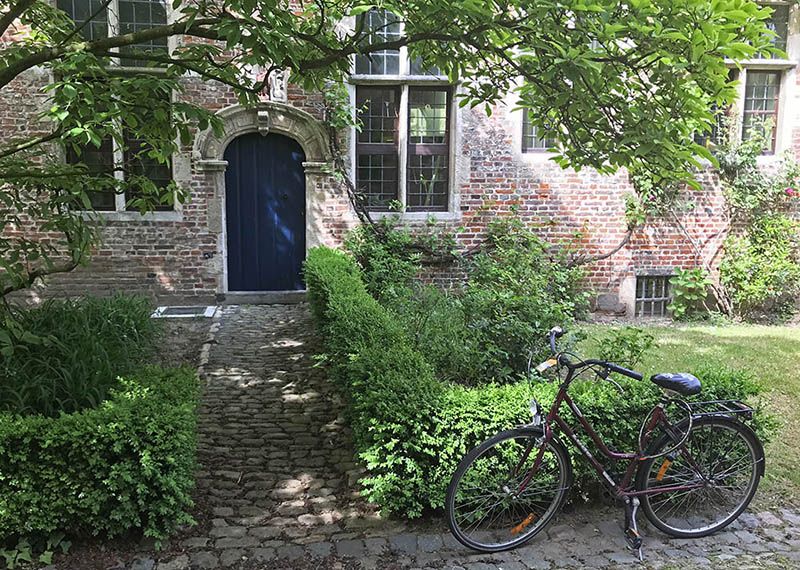 What to see and do

A good way to get to know a city quickly is by a bike tour. In Leuven, you can do that with Baja Bikes. This company organises tours in many cities around the world with a (native) English-speaking guide.

Baja Bikes has various themes for a bicycle tour through Leuven. You can book a tour which shows you the biggest highlights. The enthusiastic guide has a lot to tell and provides a lot of background information. In just under three hours, you will learn a lot about the history, culture and highlights of the city. The perfect start of your city trip to Leuven!

By the way, as a beer lover, you simply have to check out the Leuven Beer Tour. And if you want to experience what it’s like for a student in Leuven, take the Leuven Bike Tour By Night.
Below you can read what we think you should see or do.

Visit to the historic centre

Besides a bike tour you can of course also take a stroll through the historic centre. The last time we did a self-guided walking tour. 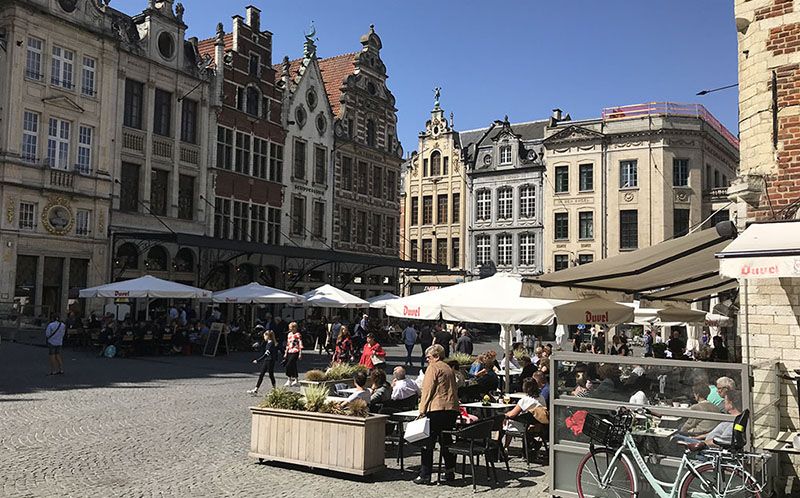 We started and ended at the Grote Markt, one of the busiest squares in Leuven. The square was built in the 14th century at the same time as the Catholic University of Leuven was founded. The completely traffic-free square is home to many beautiful Gothic buildings, such as the monumental town hall. It is also home to St. Peter’s Church, several guildhalls and many cosy cafés and restaurants.

During the summer months, several events are organised on the Grote Markt. One of these is ‘Beleuvenissen’. These are concerts on Fridays with themes such as folk, low countries or Latin. Another event is ‘Hapje-Tapje’. At this gastronomic event, several restaurants set up stands with small versions of their best dishes. A feast for the eyes at a reasonable price!

The city walk that we did naturally took us past Leuven’s town hall.

This 15th-century town hall is considered by many to be one of the most beautiful Gothic town halls in the world. Very nice to see are the many statues in the façade of important historical figures. For example, you can see Napoleon standing among them. 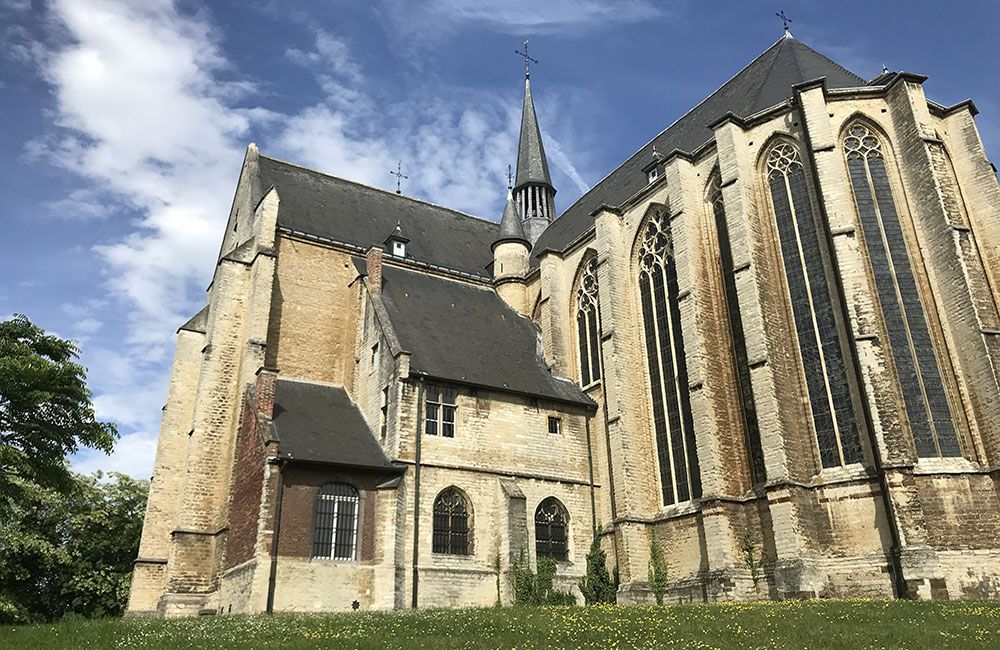 This church is more than a thousand years old. But the construction of the late Gothic church as it can be admired today only began in the fifteenth century. What makes St Peter’s Church worth visiting is its art collection. For example, it houses ‘The Last Supper’, the famous triptych by the Dutch painter Dirk Bouts. Since 1999 the church has been on the UNESCO World Heritage List.

One of the oldest universities in Europe is the Catholic University of Leuven. The university was founded in 1425. Most of the more than 300 old university buildings are scattered around the town centre.

The university’s Cloth Hall (Lakenhalle) in particular is worth a visit. This building from 1317 was the selling point of the clothmakers’ guild. In 1432, part of the building was made available to the university for lectures. At the end of the 17th century, the entire building was given on a long lease to the university. Nowadays, the Lakenhalle is the administrative centre of the university. It also hosts official events, such as the registration for the academic year and the defence when a doctorate is awarded. 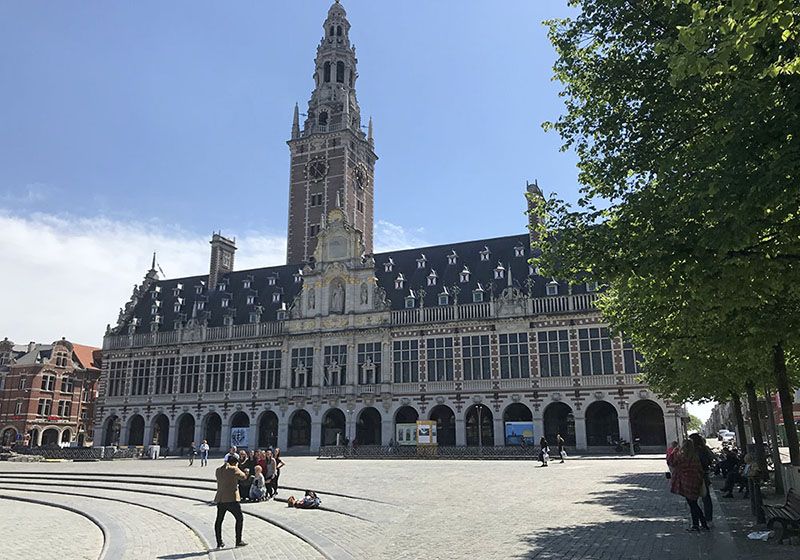 The university library (Artes) is located on the Ladeuzeplein in a beautiful neo-Renaissance building from the 1920s. Especially the large reading room in the library is worth a visit. However, our main interest was in the 87-metre-high library tower. The ascent to the tower takes you past several interesting exhibitions. On the fifth floor there is a balcony with a beautiful view over the city.

Our favourite spot in Leuven is the Oude Markt. It is the place to be for a drink during your city trip in Leuven. The elongated square is also known as ‘Europe’s longest bar’. There are no fewer than 32 cafés and terraces! 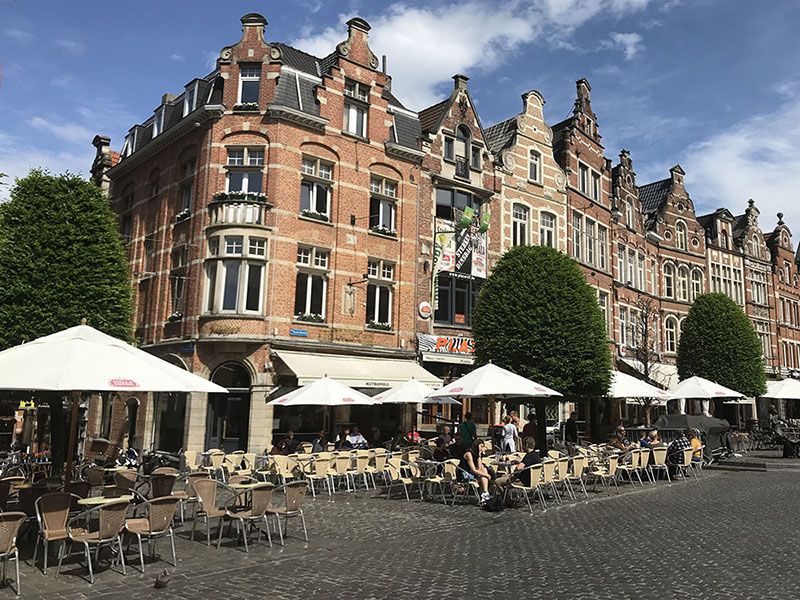 Visit to the Great Beguinage

The Great Beguinage dates from the thirteenth century. With a surface area of more than 3 hectares, it is one of the largest remaining beguinages in Flanders. What makes a visit to the beguinage so enjoyable are the many extremely picturesque streets, squares and houses. In addition, the Dijle River flows right through the beguinage. The river with the bridges and the many gardens complete the idyllic picture. We kept on taking pictures!

The fully restored historic district has some 300 houses. In its heyday, 360 pious women lived in the beguinage. Nowadays, the beguines have made way for students and university staff. 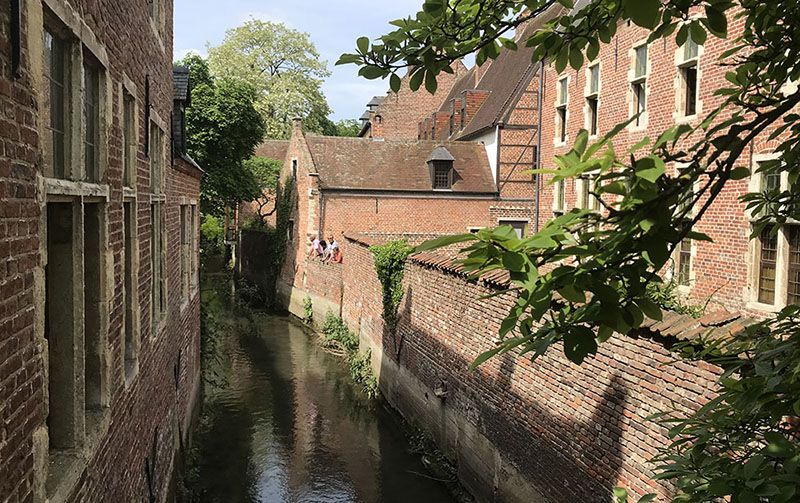 The Kruidtuin is an early 18th-century botanical garden. It was specially laid out for medical students. The garden is the oldest botanical garden in Belgium. The more than 2 hectares large terrain now offers many species of trees, shrubs, herbaceous plants, water plants and herbs. In the 450m² greenhouse, you will find a variety of (sub)tropical plant species. We found it a lovely place to relax after the many kilometres of walking during our city trip.

Leuven is the Belgian Mecca for lovers of special beers, like me. There are several breweries and dozens of beer cafes. The history of Belgium’s beer capital goes back to the 14th century. Brewery Den Hoorn opened its doors back then. Because beer was a lot healthier than drinking water, the inhabitants of Leuven (including the students) drank over 400 litres of beer per year. At the beginning of the 16th century, the brewery was the town’s largest enterprise.

At the beginning of the 18th century brewer Sebastiaen Artois took over the brewery. He further expanded the business by acquiring several other breweries. In the many years that followed the family business remained very successful. In the year 1926, a special Christmas beer was brewed at Christmas, called Stella. The lager became so popular that the brewery decided to brew Stella throughout the year. Stella Artois became by far the brewery’s most successful beer. Today the brewery is part of AB InBev, the largest brewing chain in the world.

You can visit the brewery every Saturday and Sunday. Of course, we did so as well. On the outside, the brewery does not look very charming. But the excellent tour made up for everything. We have visited breweries before. However, our particularly enthusiastic guide was able to tell us new things about the brewing process. And what I did not know before is that there are so many types of Leffe being brewed! All in all, we thought the Stella Artois Experience was a must for every beer lover! You can find more information on the Stella Artois website.

Practicalities for a city trip to Leuven

What is the best time to visit Leuven?

From September to June, you will find the most 'life in the brewery'. The more than 35,000 students ensure a pleasant dynamic. However, the summer months are also a good time to visit Leuven. Many events are organised then. The best weather for sitting on a terrace is from May to September. But April and October are also good months to visit. Many terraces have terrace heating. Our preference? April, May and September!

How to get around within the city?

The old town is fairly compact. Most places of interest can be reached on foot. And since several streets and squares are car-free, we recommend exploring the city on foot. Another option is the bicycle. You can hire one from Velo or Leuven Leisure, for example.

What are good accommodations in Leuven?

There is plenty of accommodation available in Leuven. The offer varies from (boutique) hotels and flats to bed & breakfasts and guesthouses. Because you will probably come to Leuven by car, we recommend accommodation with parking facilities. Look for accommodation within walking distance of the old centre. You will then be able to enjoy the many wonderful terraces, cafés and restaurants. 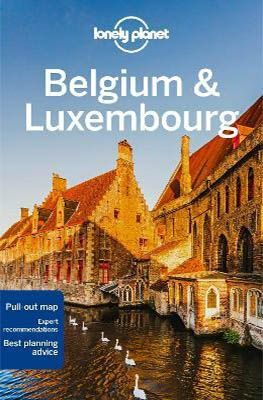 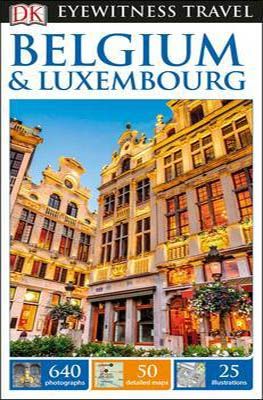