Phuket, the Thailand in miniature

Phuket, the Thailand in miniature

In the spring of 2019 we travelled with a group via Phuket to the more northerly Khao Lak to dive there. We had never been to Phuket before – partly due to the not-so-positive reviews from other travellers. But to be able to acclimatise sufficiently and recover from the jetlag, we decided to start our diving holiday with four days’ relaxation. Overall impression: Phuket is like a mini Thailand. It has so much to offer on a relatively small area of land that we could easily spend a week here!

Phuket is located on the Andaman Sea in the southwest of Thailand. In the past, because of its location on one of the most important trade routes between India and China, it was already known among sailors. Before the island became Thailand’s richest province thanks to tourism, it derived its wealth from tin and rubber. The colonial buildings, especially in Phuket city, still remind us of the 16th and 17th centuries. In that period, the Dutch, English and French set up the island as a trading post for tin mining and rubber plantations.

The west coast of Phuket was badly hit by the Indian Ocean tsunami in December 2004, but now there is hardly anything left of the disaster. The island is once again a popular travel destination.

Phuket is a melting pot of Thai, Chinese and Malaysians. The majority of the rural population is Muslim. The economy of the provincial city, which has grown enormously in the past decade, has resulted in many young people living a similar life as that in Bangkok. 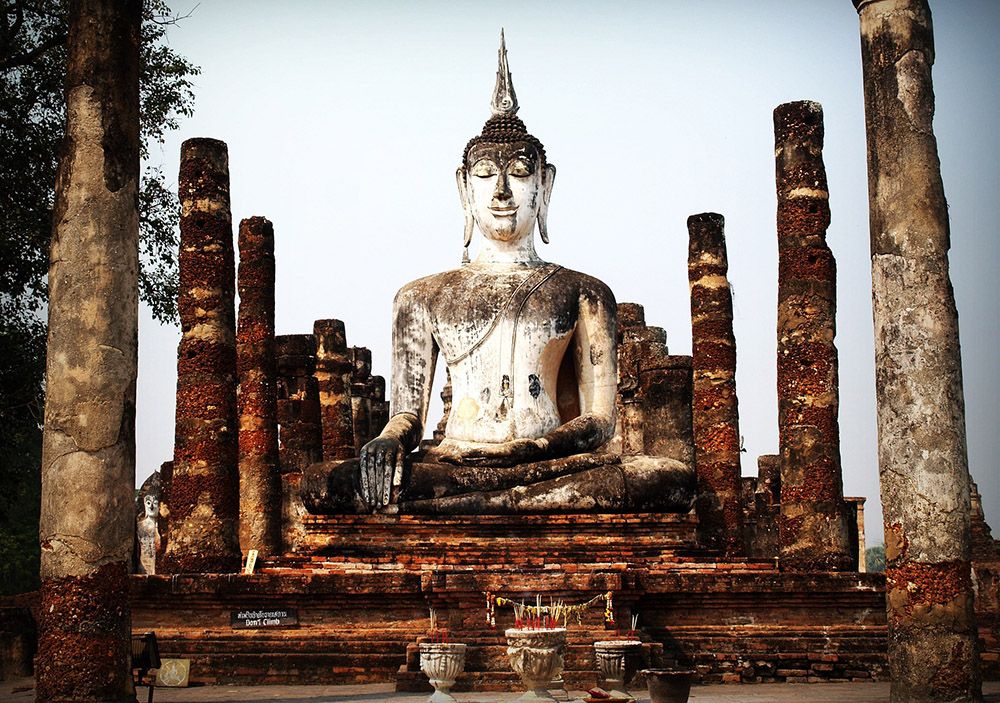 What to see and do

Here are just a few of the many things you can see or do on the island.

If you want to discover the many delicious Thai dishes in a way that is safe for your stomach, then a visit to the Sunday night market is an absolute must during your stay in Phuket. For a trifle sum, the most delicious meals are prepared before you. It is not only an introduction to Thai cuisine, but also to Thai culture. 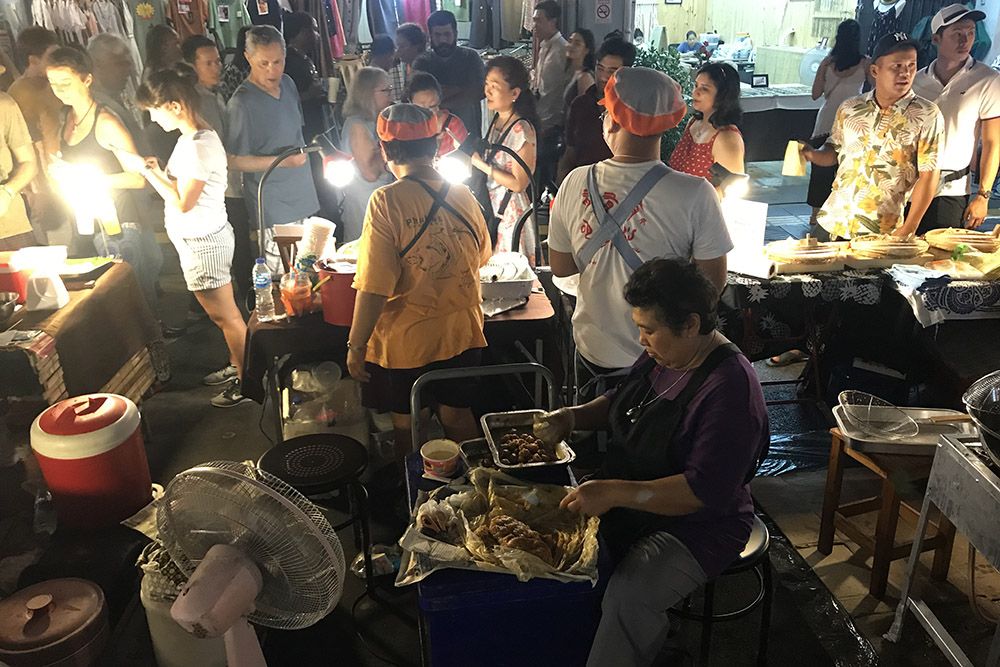 The Gibbon Rehabilitation Project in north-eastern Phuket was founded in 1992 to repopulate the last remaining rainforest in Phuket-Khao Pra Theaw with gibbons previously held in captivity, by gradually getting the animals used to their natural environment. Another aim of the project is to raise awareness among tourists and locals of the importance of environmental conservation.

Although the Gibbon Project was certainly interesting to visit, the real attraction for us was the environment itself. From the visitor centre you can do a beautiful hike through the jungle to the Bang Pease waterfall! Phuket has many more waterfalls, including the waterfalls of Ton Sai and Kathu. But when we were there at the end of the dry period, those waterfalls had almost dried up. The Bang Pease waterfall was a pleasant surprise. 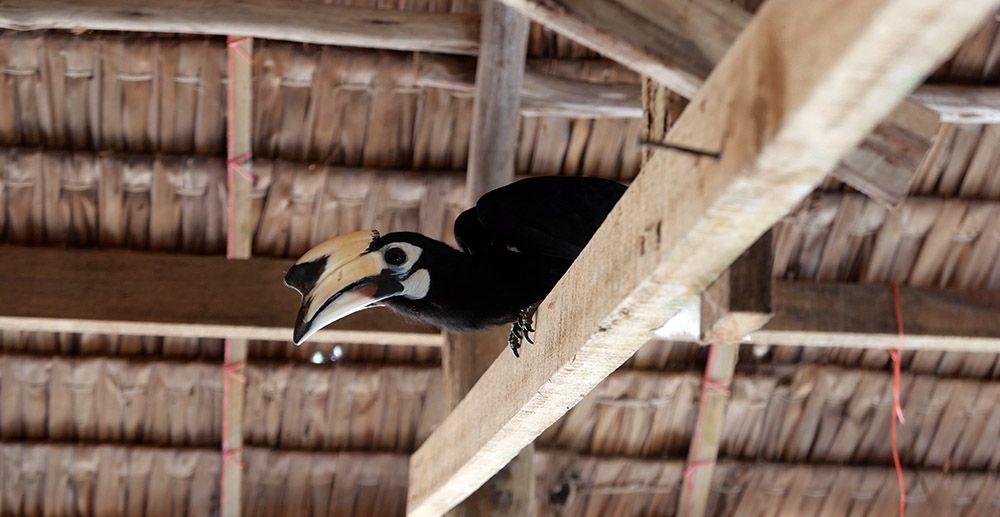 The Great Buddha, situated between Chalong and Kata in the south of Phuket, is a 25-metre-wide and 45-metre-high white Buddha statue that can be seen from far off. The immense statue is only one metre shorter than the Statue of Liberty in New York. From the parking lot where your hired taxi patiently waits for you, it’s a five-minute walk and then you climb the wide steps before standing at the foot of the statue. Fantastic views await you here of the south of the island!

The statue, also known to the locals as Phra Puttamingmongkol Akenakkiri Buddha, was built in 2004. The construction is of reinforced concrete, and surrounded by beautiful Burmese, white marble. Next to the Big Buddha is a smaller, copper-coloured Buddha statue.

You don’t have to pay an entrance fee, but make sure you are dressed respectfully. After all, it is a place of worship. If necessary, you can borrow a sarong at the entrance to cover your shoulders and upper arms. 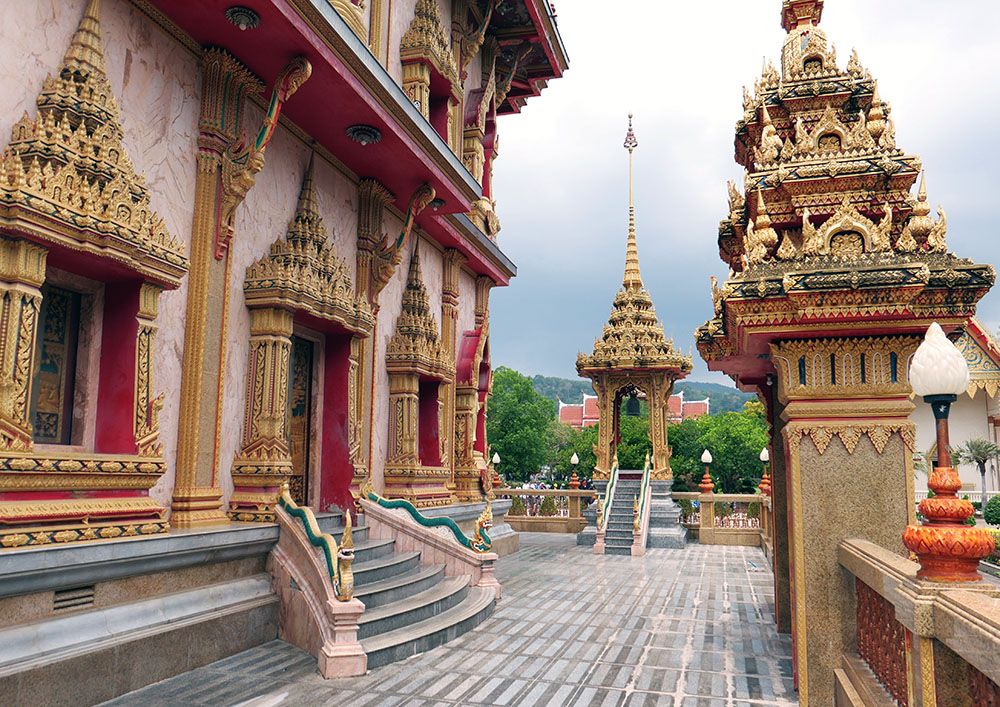 The temple is dedicated to two monks who in 1876, with their knowledge of herbal medicine, helped the wounded from a tin miner uprising. The locals come here to pray. Westerners have been welcome there for a century to learn about Buddhism. 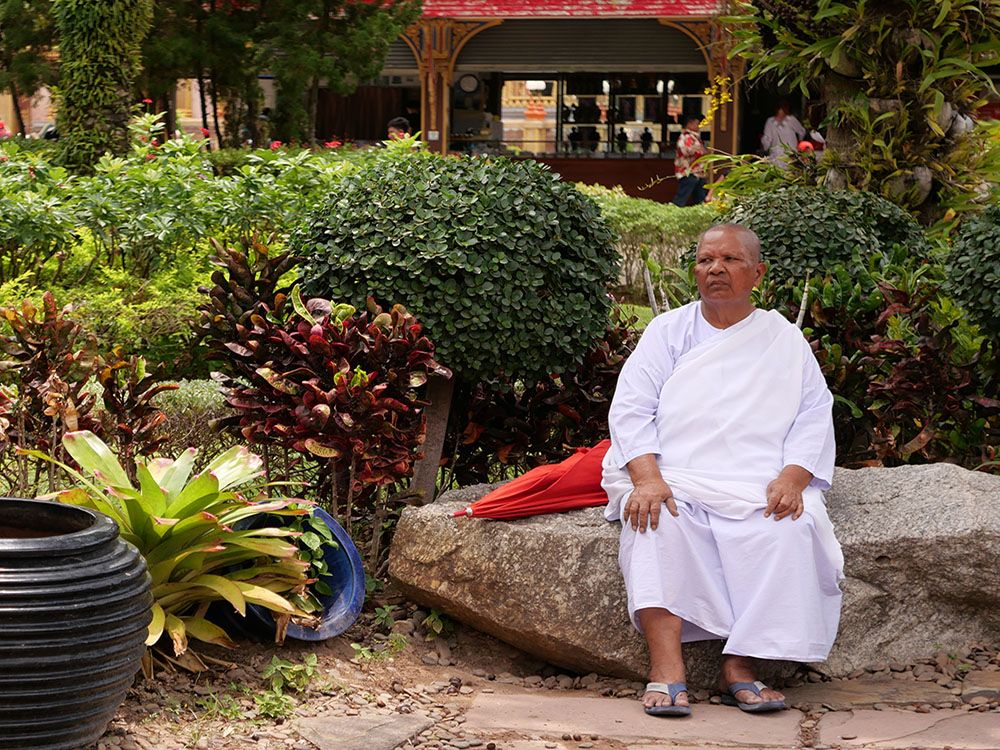 The cape of Promthep (cape of God) is one of the most photographed and perhaps the most famous locations in Phuket. Every evening, a lot of tourists take large coaches, scooters or taxis to the southernmost hill of the island to take in the sunset. We were there during the day to avoid the big crowds.

The cape has more to offer than a beautiful sunset! For example, a lighthouse built in 1996 with interesting, historical maritime artefacts, where you have a spectacular view over the east and southeast of the island. You can also do a nice walk to the end of the cape.

Between Phuket, Phang Nga and Krabi, lies one of the most beautiful bays in Thailand. This bay of Phang Nga is known for its limestone rock formations. The most iconic of the many limestone formations in the bay is undoubtedly James Bond Island (Ko Tapu), where the recordings were made for ‘The Man with the Golden Gun’. In our opinion, your visit to Phuket is not complete if you haven’t been here. However, beware: the island is – understandably – very touristy. Take your pictures as you sail through the breathtakingly beautiful bay towards the island.

Most visitors explore the area on a one-day tour on a long tail boat, but on some larger islands you can stay overnight. However, instead of taking the long tail boat, consider sea kayaking through the bay. There are many day trips to book from Phuket and Krabi where you will get to see a lot more under professional supervision than when you are cruising through the bay with a motorised boat. There are mangroves and many caves that are only accessible by kayak. 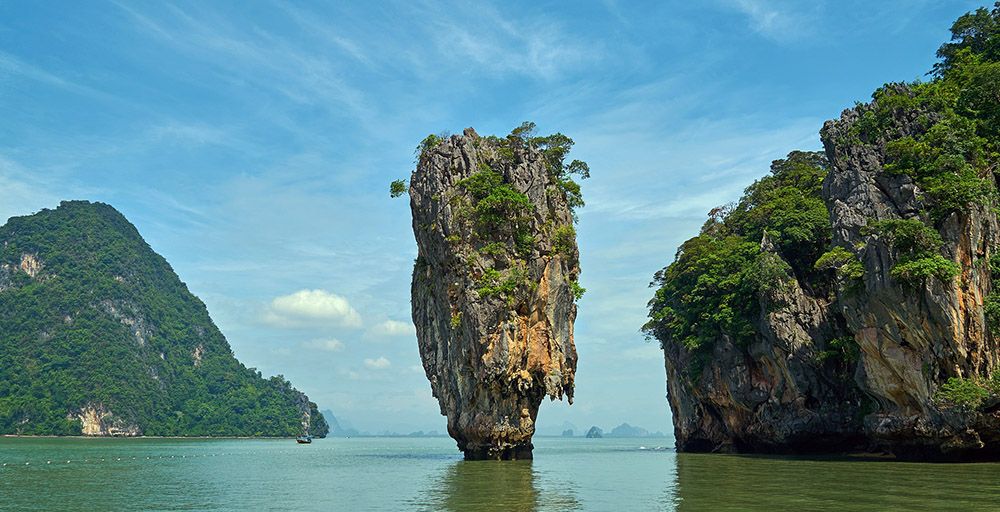 The beaches in the west and those of the surrounding islands

Although we appreciate the natural beauty of many tropical sandy beaches, we are not real beachgoers ourselves who can stay on beaches for hours. If you would like to spend a day or an afternoon on a beautiful beach, consider one of the following options in the west of the island: if you would appreciate a day or afternoon visit to the beach, we recommend the beaches of Nai Harn, Nai Thon and Kata Noi. These are all beautiful, pearly white beaches that are less developed and therefore quieter than, for example, the famous beach of Patong.

Another perhaps even better option is to take a day trip to one of the nearby, smaller islands. The beaches of Koh Raya and those of the popular Phi islands are absolutely beautiful! In our blog about Krabi we go into more detail on this.

Phuket is warm and humid all year round. In the rainy season from May to October, you still have a lot of sunshine, especially in the morning and afternoon. However, the visibility of the seawater decreases during this period, resulting in not great diving conditions. From March to the beginning of May, when we were there, it can get very hot. A refreshing dip in your hotel pool is very welcome. The locals consider the months November to February as their winter. You have a lot of sunshine and it is less oppressive than in the other months. For this reason, these months may be the best time to travel to the island.

Phuket is easily accessible from all corners of the world. From many countries, including the Netherlands, there are non-stop flights to the international airport of Phuket. In addition, the airport receives many daily flights from Bangkok. If you prefer to go by land, there are several good train and bus connections from Bangkok and other important tourist regions.

Keep in mind that the island is large and that, due to the busy traffic, you will spend a long time travelling from the airport in the northwest to the most south-eastern point of the island, for example. Because we wanted to see more of the island than just the famous beaches in the west, we opted for a fairly central location for accommodation, namely Phuket City.

From here we regularly took a Songthaew or minivan which we rented for six hours including a driver. It’s a good idea to negotiate a price in advance and to agree on a price. It seems that the songthaews that are called ‘tuk-tuks’ on Phuket, are managed by the Thai mafia. However, we didn’t notice anything about this, not even in the price.

Another possibility is to be transported by taxis with a meter. Again, it is wise to agree on a price in advance. Ask at the reception of your hotel or other travellers what a taxi ride should cost.

Although you can also rent scooters on Phuket, we would advise against this. The people in traffic drive like crazy, the scooters are usually uninsured and the chance that you are the held accountable if you are involved in a crash or accident through no fault of your own is very high.

Phuket has no shortage of accommodation. Be informed in your choice of what you want to do on the island. If you go for the beaches, then a resort on the west coast may be the best choice. If you want to see a lot of the island as we did, then the city is more convenient. If you only have a few days to travel to other parts of the country, a hotel in the north is more convenient. We initially had our sights set on Phuket’s charming, oldest hotel, namely the Memory at On On hotel, but because we liked a swimming pool so much for the hottest period of the year, we finally went for the brand new Ecoloft hotel. Definitely a must! Find other accommodation on Phuket. 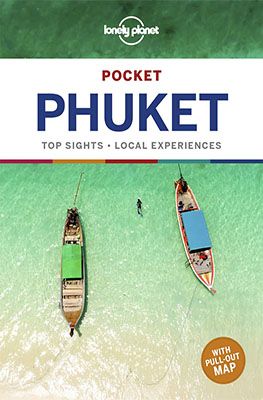 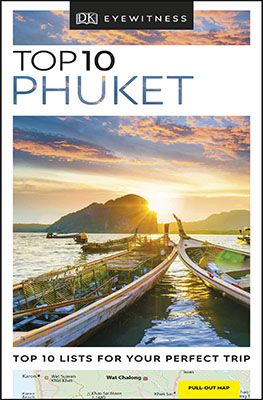