The best train journeys in Europe

The best train journeys in Europe

There is nothing more romantic than a train journey in a foreign country. The train takes you through one impressive landscape after another. The only thing you hear as an observer is the uninterrupted, rhythmic sound of the carriages. You enjoy delicious food and sleep comfortably. These are 7 great train journeys in Europe for your bucket list!

From Norwegian Bergen to the capital Oslo

Many consider the train journey from Bergen to Oslo and vice versa one of the most beautiful train journeys in Europe. The train climbs over 1200 metres from sea level. You pass charming villages, large forests, immense fjords, blue lakes, rivers and impressive waterfalls. You can do this train journey the whole year round.

The Mittenwaldbahn, popularly known as the Karwendelbahn, is a railway in the Austrian and German Alps. The north-south route starts in Garmisch-Partenkirchen in Germany. The railway then winds through Mittenwald before making an impressive descent to Innsbruck along the steep Inn Valley.

The Bernina Express runs from Switzerland’s oldest city Chur via St Moritz to Tirano in Italy. This highest train route in the Alps leads through breathtaking alpine landscapes. And over the “Rhätische Bahn”: an architectural masterpiece and UNESCO World Heritage Site.

The “Hogwarts Express” through Scotland

Discover the beauty of Scotland on one of the world’s most famous train journeys: the Jacobite steam train, known from the Harry Potter films. The train journey through the Scottish Highlands takes you past some famous Harry Potter film locations. Like the extremely iconic Glenfinnan Viaduct.

The Cinque Terre Express in the Italian Riviera

The five particularly picturesque villages of the Cinque Terre are the crown jewels of Italy’s Ligurian coast. Because the villages are built against or on top of the steep cliffs, you cannot get there by car. But you can get there by train! Between the many tunnels, you have unparalleled views of the Mediterranean Sea.

The Glacier Express train is the most famous train and “slowest express train” in the world. The train crosses the Swiss Alps and offers passengers one of the most beautiful landscapes imaginable. The journey leads through breathtaking mountain scenery, deep gorges, picturesque valleys, 91 tunnels and across 291 impressive bridges. 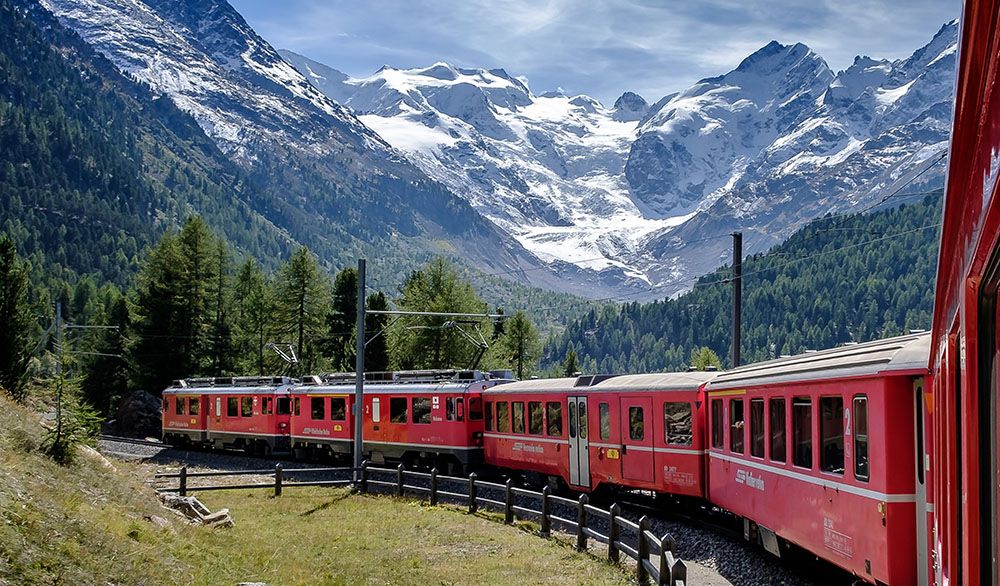 Boarding the Spanish “Transcantábrico Gran Lujo” is like going back in time. That is, to the beginning of the last century when the luxury saloons of this train first rolled onto the tracks. The extremely comfortable train journey from San Sebastian to Santiago de Compostela takes more than a week. Yet you will want to do it again afterwards!

Have you already gone on some wonderful train journeys through Europe and want something more? You can also go on the most beautiful trips on an iron horse outside of Europe. How about the Rocky Mountaineer through the beautiful, vast nature of Canada?

Or the ultra-luxurious Maharajas’ Express in India? These are just a couple of the many unprecedented examples where you explore the world from the comfort of a compartment.