Highlights of San Gimignano, the town with the towers

Highlights of San Gimignano, the town with the towers

Home » Italy » Highlights of San Gimignano, the town with the towers

In Tuscany, between Florence and Siena, lies the beautiful town of San Gimignano. The town is famous for its many towers, which can be seen from far away. It is not without reason that San Gimignano is on the UNESCO World Heritage List. Within the city walls, you will find a romantic, medieval centre with many highlights. We will lead you along the highlights of San Gimignano. But first, we will tell you a bit about the history of the towers in the city. 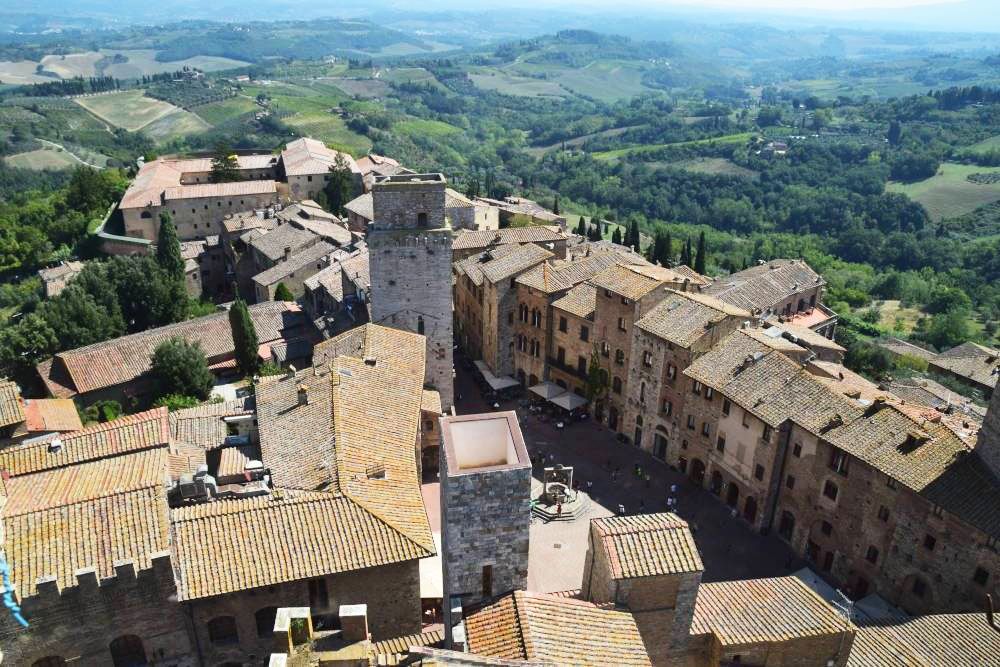 San Gimignano is beautifully situated on a hill. Already in ancient times there was a small Etruscan settlement on it. In the 10th century the current San Gimignano became a real city. Due to its location on the most important pilgrimage route to Rome, the city became increasingly prosperous.

The many noble families in the city all built a tower. This is where they lived and worked. Around the 14th century, the city boasted no less than 72 towers. Of these, 14 are still left today. There was great rivalry between these families. Prestige and honour made one tower even higher than the other.

The town fell into disrepair when the pilgrims’ route was shifted and a major plague epidemic struck. Fortunately, the medieval character of San Gimignano has been well preserved. That is why the city is now an important tourist attraction in Tuscany. 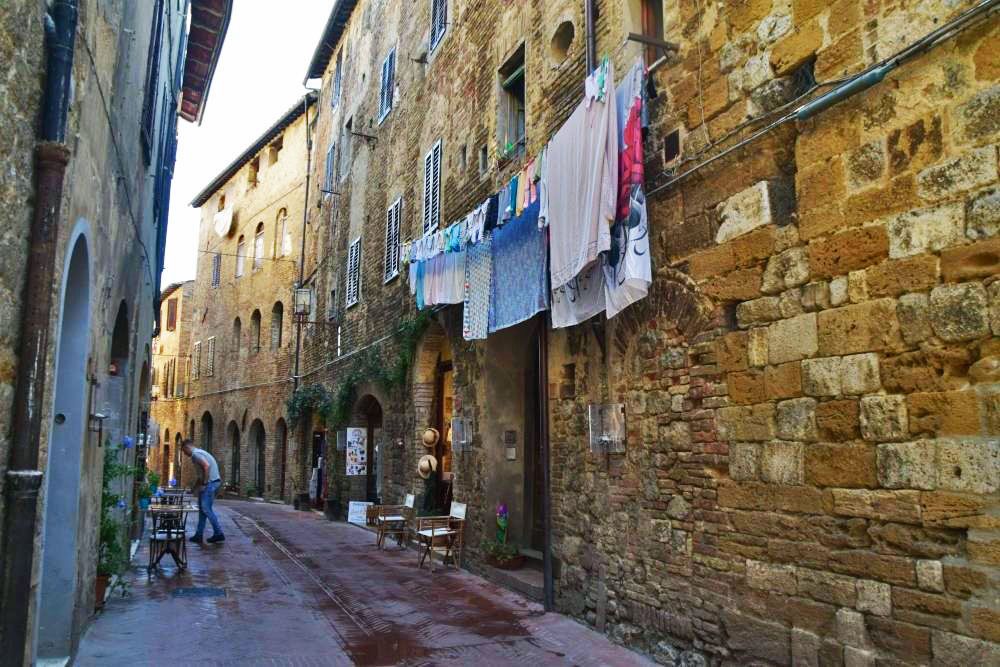 The city is not large, you can easily walk from one side to the other. Yet the highlights of San Gimignano are numerous. But perhaps the most fun is strolling through the narrow streets and alleys. Above you, the colourful laundry hangs to dry on the clotheslines. Meanwhile, you marvel at the beautiful houses and monuments. You can really imagine yourself in the Middle Ages when you wander through the historical centre of San Gimignano.

This is the literal highlight of San Gimignano. The Torre Grossa, with a height of 54 metres, is the highest tower in town. And you can climb it too. Be sure to do so. Because from the tower, you have a wonderful view of the city. You will have a view of the lovely squares, the beautiful street pattern and the other towers. You will also have an unparalleled panorama of the surrounding area. 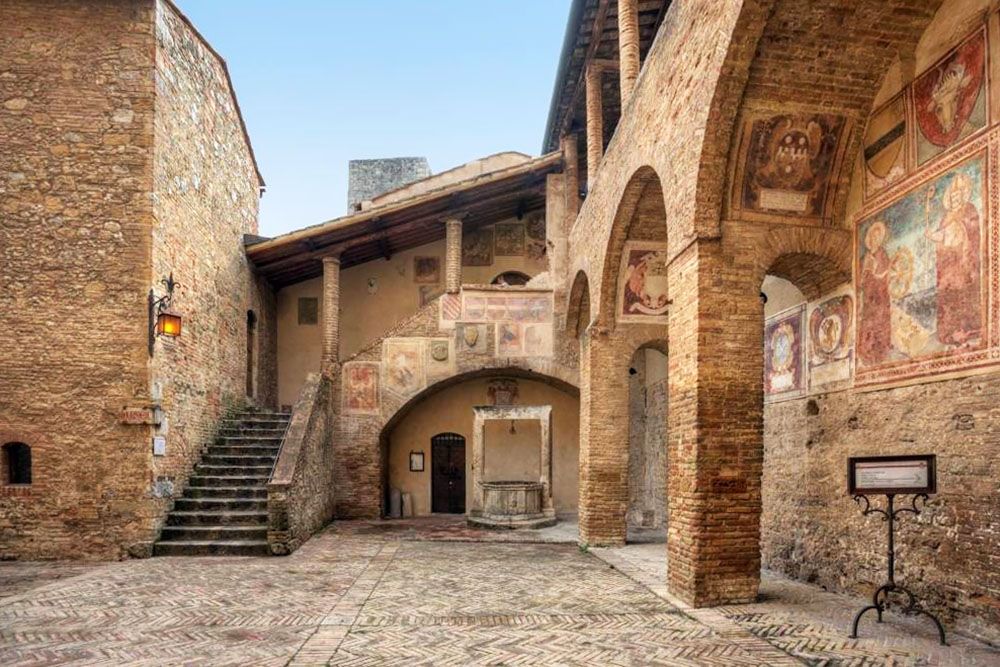 This square is the beating heart of the historic city. It is named after the famous fountain that dominates the square. On the steps of the fountain, many people are sitting in the sun, many licking a delicious ice cream they just bought. On either side of the square are the most beautiful buildings. Such as several palaces, the Torre del Diavolo and the “twin towers”. These two towers belonging to a noble family used to be higher, against the wishes of the town council. The family therefore had to make them “a head shorter”. 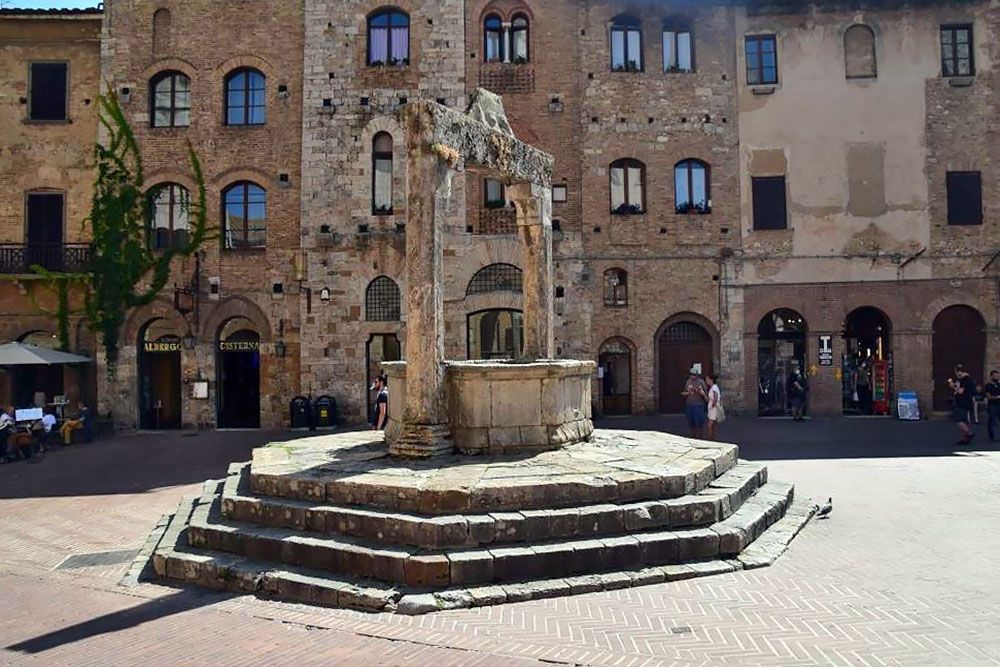 Italians are masters at making the most delicious ice cream. In San Gimignano, Sergio Dondoli’s ice-cream parlour is the place to enjoy a delicious gelato. He regularly wins awards with his ice creations. For instance, he was the first to add Prosecco to his ice cream. And, of course, Vernaccia, the famous white wine from the region. But the ice cream parlour has many more special flavours. It is all mouth-wateringly delicious. You have plenty of time to think about which flavours to choose. Because the queue is long at any time of day. 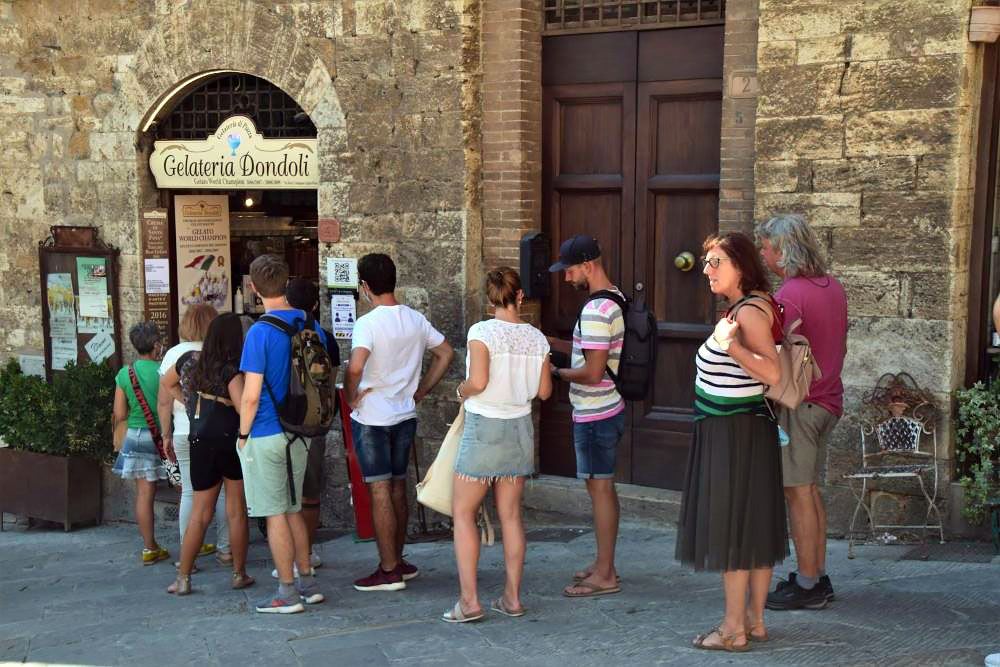 On the outside, this church does not look very special. It is a sober building from the 12th century. But once inside, you will be amazed by the enormous amount and variety of frescos. They are all scenes from the Bible. The most famous fresco is “The Creation” by Bartolo di Fredi. 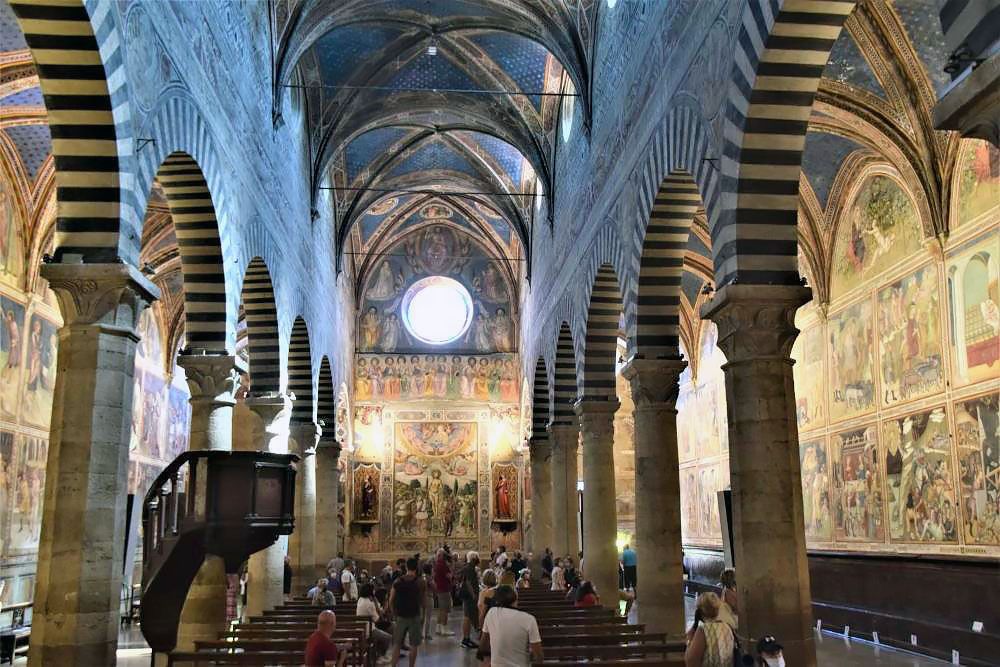 This palace has the first public loggia in Tuscany. The covered balcony gallery dates back to 1347. The palace itself was built in 1288. Now it houses the beautiful Museo Civico. You will find works of art from the painting schools of Siena and Florence. But most special are the many frescoes and the coats of arms of the mayors of the city.

This is a small and funny museum. You can see a miniature reconstruction of the city in its heyday in the 14th century. All the former 72 tower houses have been given a place in the model. After visiting this museum, you will discover the great resemblance of the present city to that of centuries ago. Except, of course, that there are fewer towers to be seen. 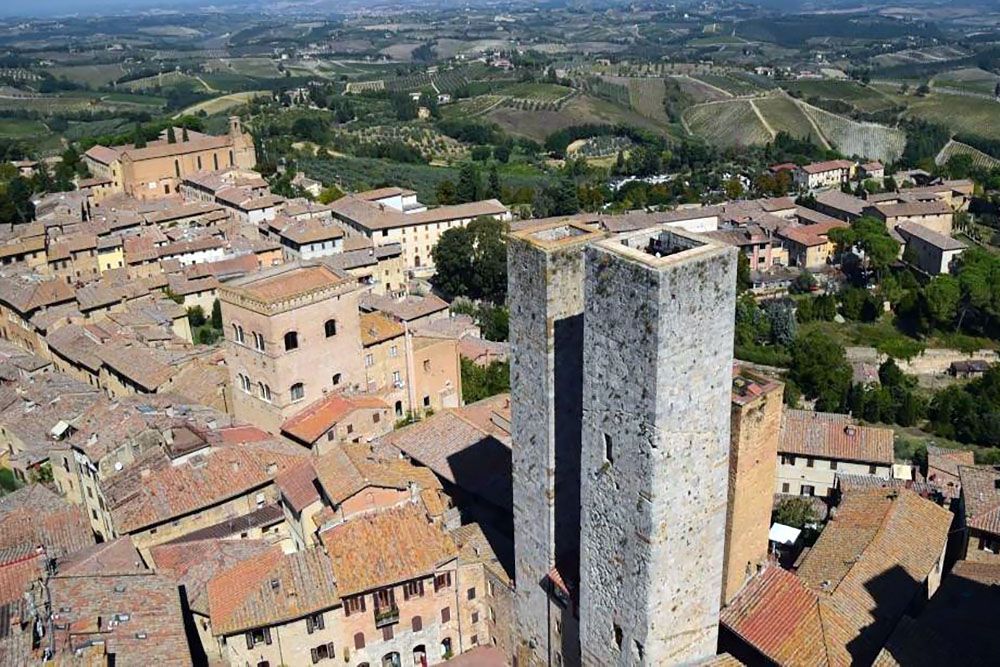 The Piazza del Duomo was the centre of the city’s religious and political life in the Middle Ages. The Palazzo del Podesta from 1239 dominates the square. It was the residence of the mayor. The tower Rognosa is 51 metres high. At the square is also the Cathedral Santa Maria Assunta.

This church has a simple façade. This contrasts strongly with the rich rococo interior. The church displays numerous frescoes dedicated to the life of Saint Augustine. To the right of the entrance of the church is the Chapel of San Bartolo. It contains a beautiful marble altar from 1495. 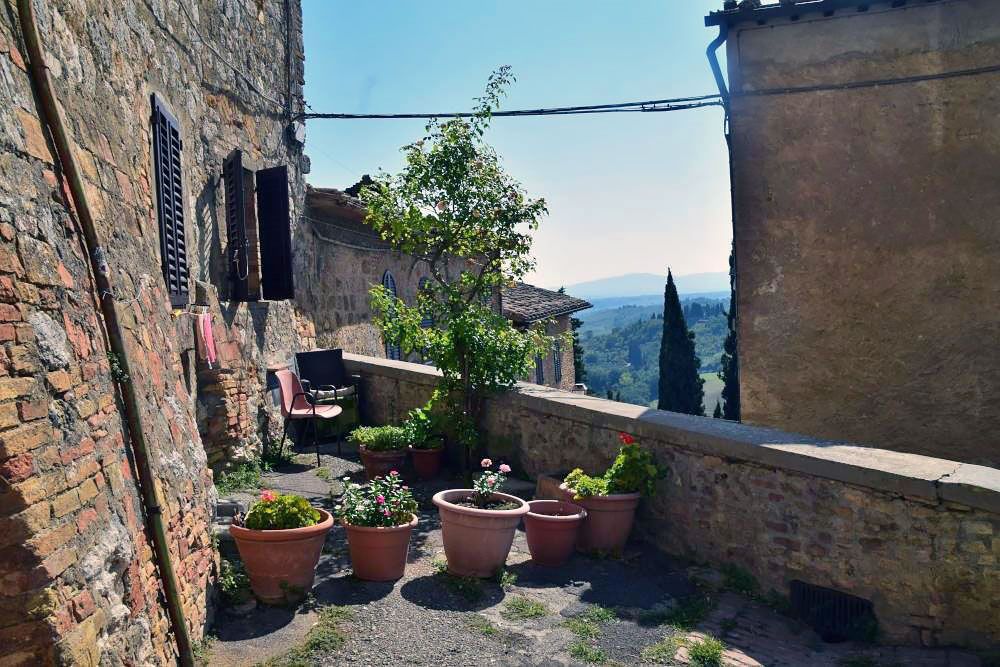 San Gimignano is situated pretty centrally. This means that from the city you can easily reach other beautiful places in Tuscany. These are the best things to do in the area:

In our mind, there is nowhere in the world where you will find a city with so many art treasures per square kilometre. The cultural highlights of Florence are indeed very numerous. In our blog about Florence you can read more about all the sights. 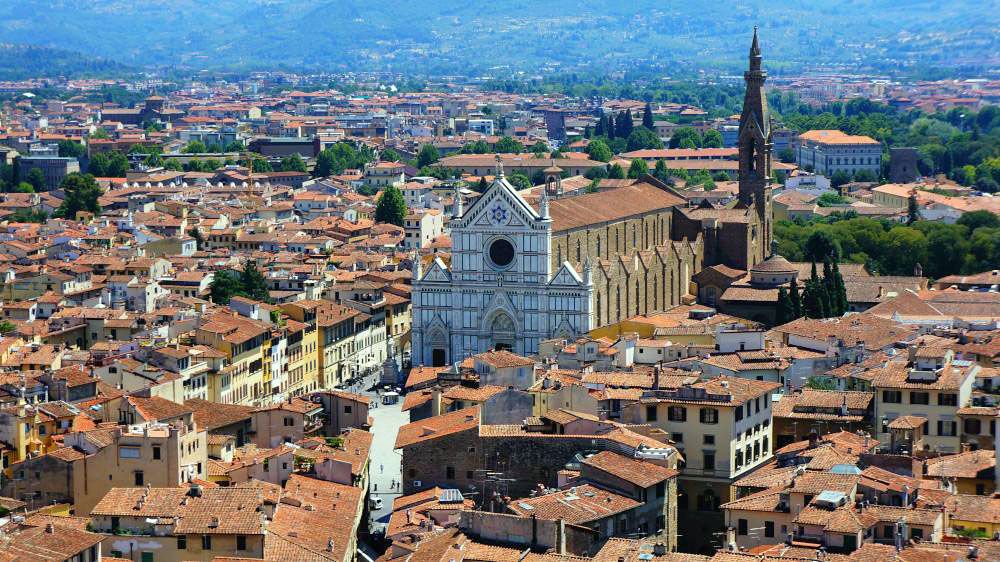 Touring other cities in Tuscany

Would you like to visit more places in the region? We think these are the ten most beautiful places in Tuscany.

Road trip through the most beautiful part of Tuscany

Tuscany is famous for its beautiful landscapes of winding roads with cypresses, vineyards, sunflowers and hills. The chance of seeing these landscapes is greatest south of San Gimignano.

So, go on a road trip to the most photographed chapel in Tuscany, the Capella della Madonna di Vitaleta. A little further on is the lovely Bagno Vignoni. You will see the most beautiful panoramas on the way. Plan a day for this. That way, you can discover the most beautiful places at your leisure. In undiscovered, sleepy villages, you can enjoy a delicious cappuccino or a sparkling glass of white wine. That is the good life, or la Dolce Vita! 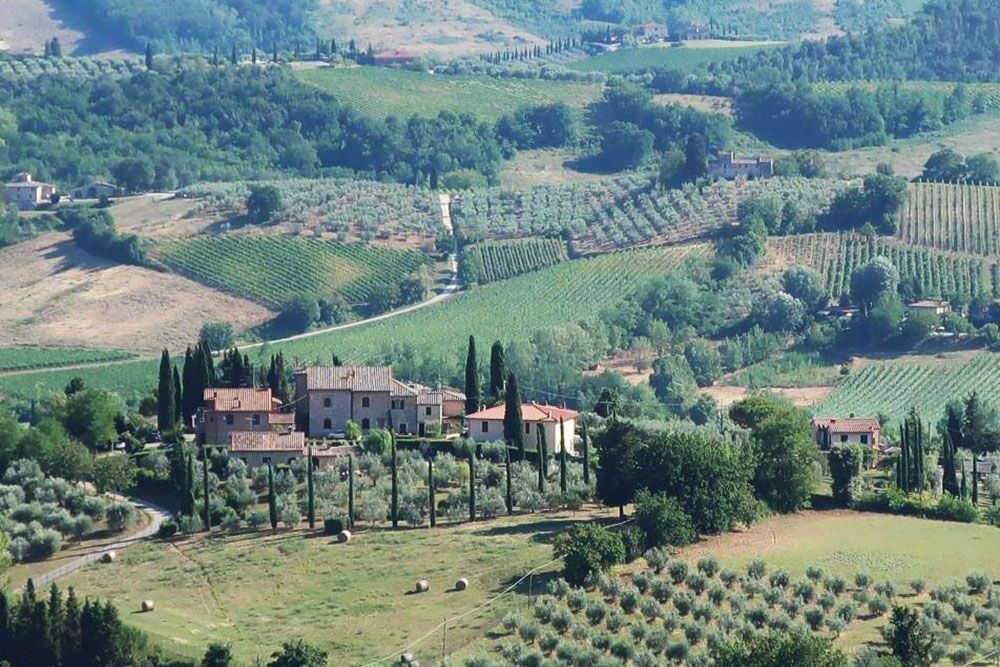 How do I get to San Gimignano?

The fastest and most practical option is to fly to Florence. With a rental car you can then explore Tuscany.

What is the best time to visit San Gimignano?

It is best to avoid the high season, especially July and August. Many buses with tourists visit the city daily. For San Gimignano is one of the most popular excursions in Tuscany. Besides, it is hot there. Therefore, visit the city in the spring or autumn. We were there in the third week of September. It was pleasantly busy then, but not overcrowded.

Can I park my car easily at San Gimignano?

The city is car-free. You have to park your car outside the city walls on one of the paid parking places. They are well signposted when you arrive. Try to park as close to the city walls as possible. From the car park you can walk to the city centre in a few minutes. In the high season, the parking spaces are quickly all taken. Be sure to grab the first spot you see. Want to know if there are any free spots? This website gives a real-time overview!

Where is the best place to eat and drink in San Gimignano?

Eating well, that's no problem in San Gimignano. Actually, you would like to have lunch or dinner every day in the city, because there are so many good restaurants. With a choice from these five, you are sure to have a perfect culinary experience.

Some good hotels in San Gimignano?

If you do go to San Gimignano during the high season, it's best to stay overnight. By the end of the afternoon, most day-trippers have gone home. You will then have the town all to yourself. In the early morning, you can enjoy the serenity of the city before the crowds burst out again. This is the range of accommodations in San Gimignano.

These places are very popular with guests:

Another option is to stay at a country B&B, just outside the city. These are three perfect choices: 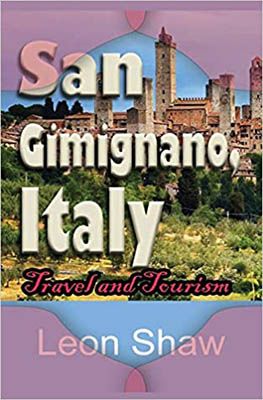 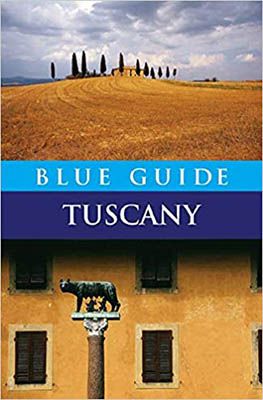 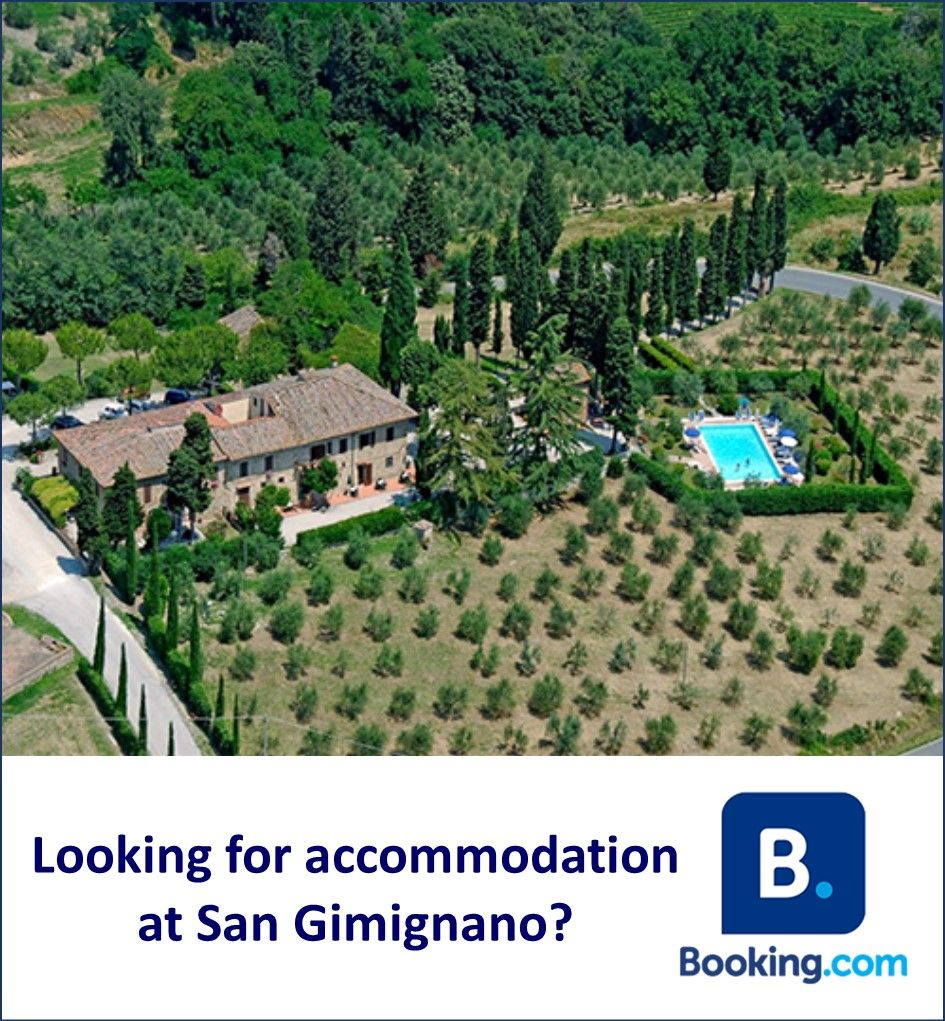