The sights of Pisa in Tuscany

The sights of Pisa in Tuscany

Home » Italy » The sights of Pisa in Tuscany

Everyone who hears the name Pisa immediately thinks of the leaning tower. It is of course the city’s main tourist attraction. More than a million tourists visit it every year. Many of them only make a short stop at the tower just to get a special photo and on to the next destination. With that, they do Pisa and themselves short. Because you can enjoy more highlights in this Tuscan city. These are the sights of Pisa that you should not miss. 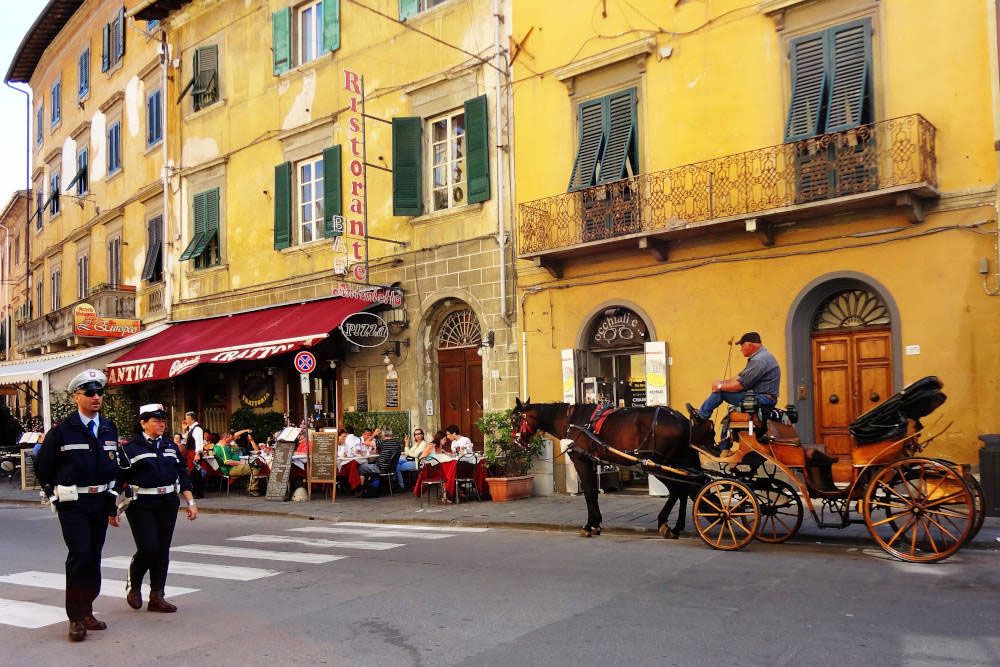 The sights of Pisa

During a large part of the Middle Ages, Pisa was a dominant city in the Mediterranean. Trade with Spain and North Africa brought great prosperity. The most important sights of Pisa remind us of those golden times. But Pisa was also significant in scientific terms. Its most famous inhabitant was Galileo Galilei. This famous physicist, astronomer and mathematician made many important discoveries. These are the sights of Pisa that you definitely want to visit: 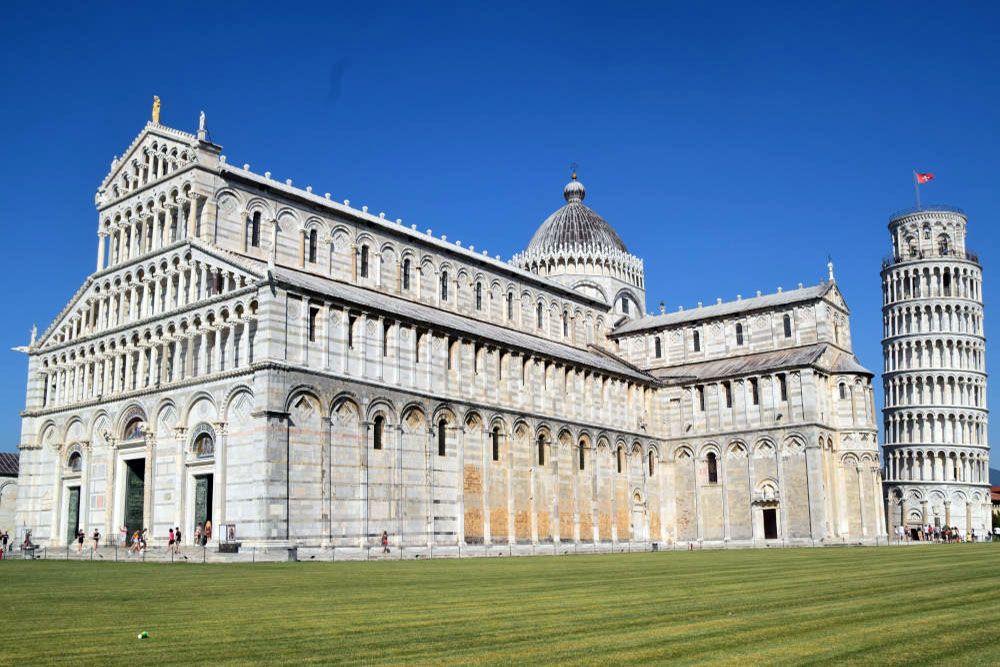 This is the city’s most famous square. And in the square, four of Pisa’s most important sights lie close together. The square has been on the UNESCO World Heritage List since 1987. The square, also called Piazza del Duomo, is located on the north side of the old town. In the square, close to each other you will find:

The Duomo, or the Duomo Santa Maria Assunta, is the heart of the square. The construction of this beautiful building started in 1064. It is one of the most beautiful buildings in Tuscany. The beautiful façade consists of four layers and is composed of rows of columns and arcades. One of the façades houses the tomb of the architect Buscheto. Inside, the special coffered ceiling is striking. It contains the coat of arms of the famous Medici family. You should also admire the pictures on the lavishly decorated pulpit. The church naturally has beautiful frescos, as well as special mosaics. 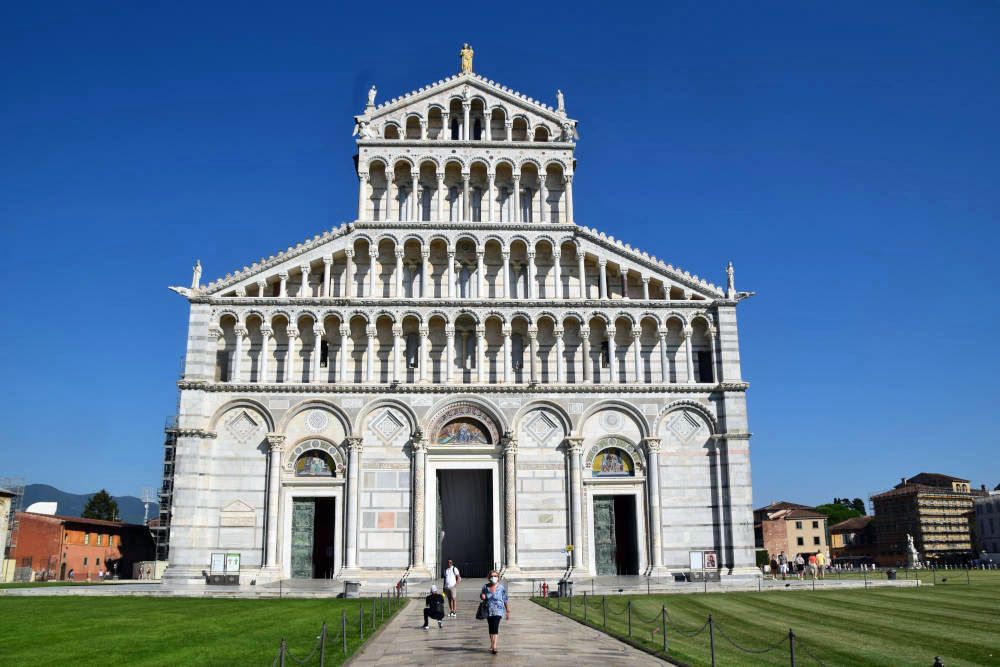 The tower was intended as the bell tower (Campanile) of the adjacent cathedral. In 1173, construction of the tower began. However, the ground was very marshy. Therefore, the tower began to lean even before the third floor was ready. Despite these problems, construction continued. Eventually, the tower became about 56 metres high with 8 floors.

Over the centuries, the tower has become increasingly out of balance. The last rescue operation in 2008 ensured that the slope was reduced somewhat. It was even considered to put the tower back into its original position. The tourist board did not think this was a good plan: tourism to Pisa would then collapse. Fortunately, it is now possible to climb the tower again. During Covid this was not allowed. 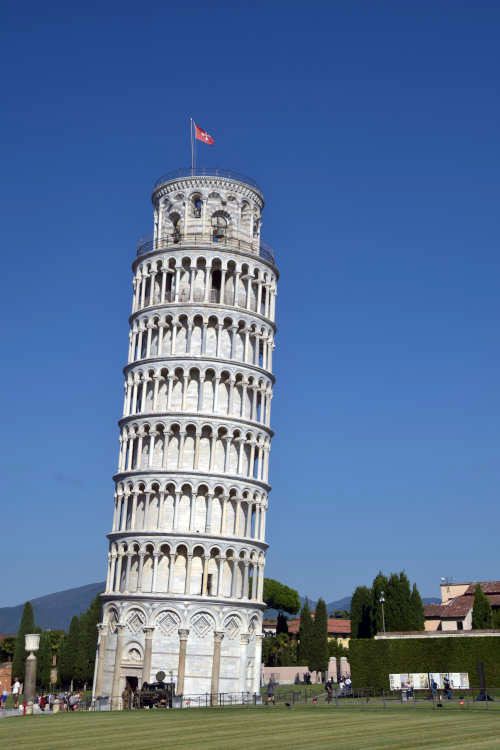 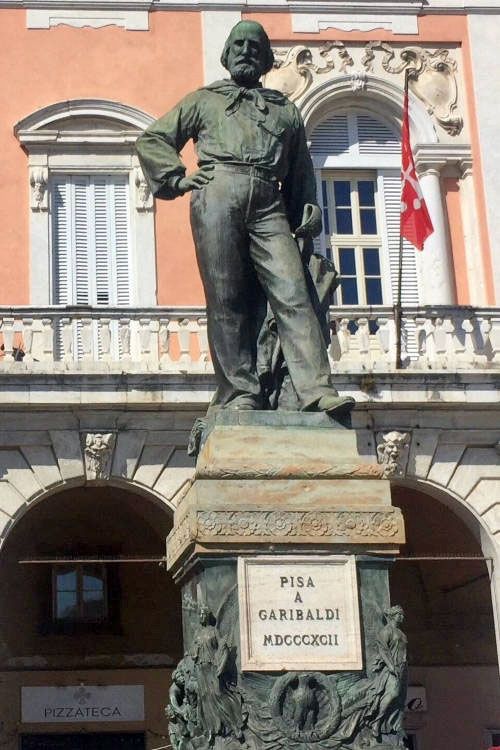 Behind the cathedral stands the round Baptistery, the cathedral’s baptistery. The size of the chapel is remarkable. In fact, it is the largest in the entire country. In 1152, construction in Romanesque style began. However, construction was halted for many years due to lack of funds. When sufficient funds became available again, construction was continued in Gothic style.

On the outside, the numerous ornaments catch the eye. At the entrance, the life story of John the Baptist is depicted. Inside the Baptistry, the immense dimensions are really striking. Furthermore, the interior is very simple without any form of decoration. Only the marble pulpit is an exception with many reliefs. The octagonal baptismal font in the chapel is also beautiful. Also note the great acoustics in the room. 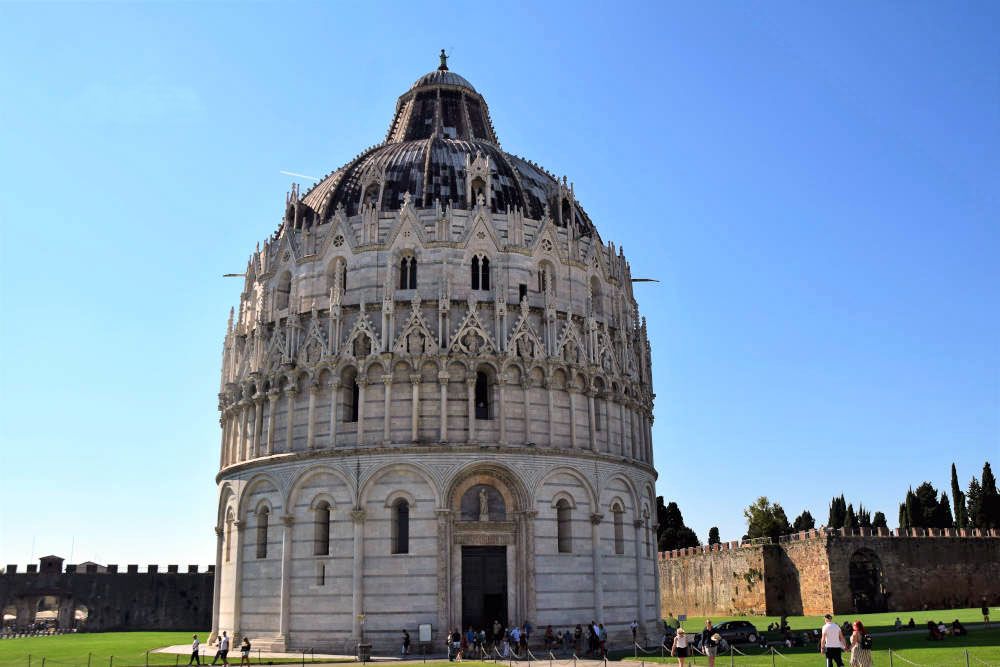 In the northern corner of Piazza dei Miracoli is Camposanto, the Holy Field. This is a walled monastery cemetery. The story goes that the Camposanto was built on soil from Mount Golgotha. This is the mountain where Jesus was crucified. During the Second Crusade, a bishop is said to have brought a shipload of soil from that place to Pisa.

The Camposanto once contained a large collection of Roman statues and sarcophagi, of which less than 100 remain today. Frescoes decorated all the walls of the cemetery. During the Second World War, most of them were badly damaged by fire bombs. Fortunately, they spent years restoring them. So now you can see the most famous fresco “The Triumph of Death” again. 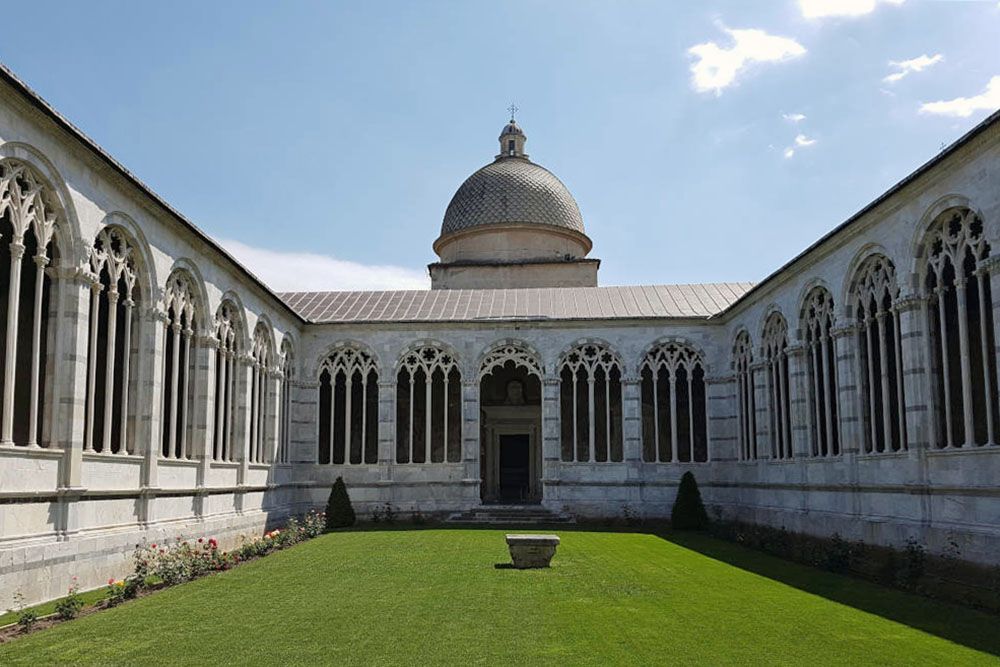 Tired of all the tourists in the city? Then head for the botanical garden. It is a green haven in the hustle and bustle of Pisa. Besides many special plants and flowers, you will find beautiful herb gardens and ponds. The garden also houses a natural history museum.

Already in 1544 the garden opened its gates. This makes it the oldest botanical garden in the world. At the time of its opening, the garden was situated on the river Arno. Some fifty years later the garden was moved to its present location. 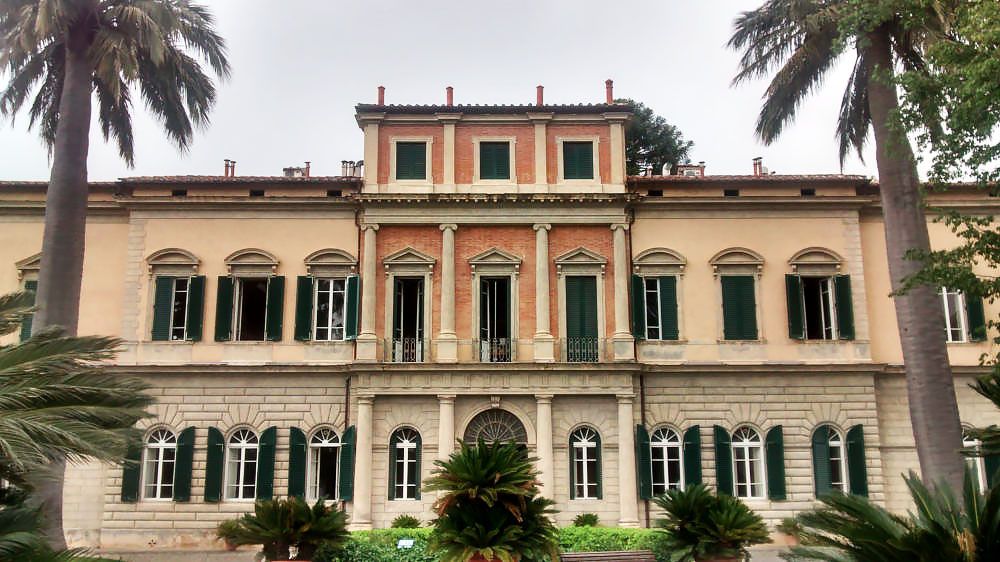 Like every Italian city, Pisa has many squares. One is large and imposing, the other small and intimate. One of the squares you should definitely not forget is Piazza dei Cavalieri, the Square of the Knights. In the Middle Ages, this square was the centre of the city. This was the seat of the rulers.

Around the square, there are beautiful buildings. Especially the Palazzo dell’Orologio is beautiful. Perhaps even more beautiful is the Palazzo dei Cavalieri. The architect and artist Vasari designed this building with the striking black and white façade in the 16th century. Finally, the church Chiesa di Santo Stefano dei Cavalieri is really eye-catching. 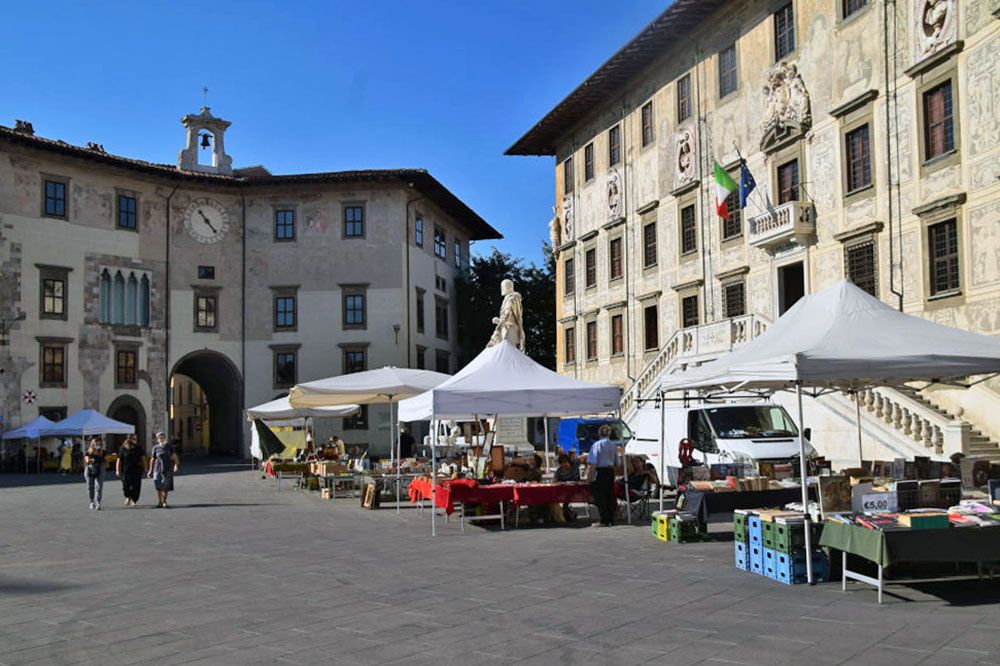 Enjoy the atmosphere in a less touristy part of the city. That is best done in the oldest district of the city, Sant’Antonio. The river Arno is the northern boundary of the district. Stroll along the river like the Pisans did. Have an espresso at one of the many bars. Buy a delicious Italian ice cream and sit on a bench by the river. Enjoy the flavours, but also the view and the life along the river.

Along the river, the special white marble church Santa Maria della Spina stands, as does the Sant’Antonio convent. Both are well worth a visit and great for pictures. And while you are at the monastery, don’t forget to see Keith Haring’s mural Tuttomondo. You will find it at the Piazza V. Emanuele II. Opposite the work of art is a café with many works by Keith Haring.

This is a walking route along the most beautiful places of the Sant’Antonio district. 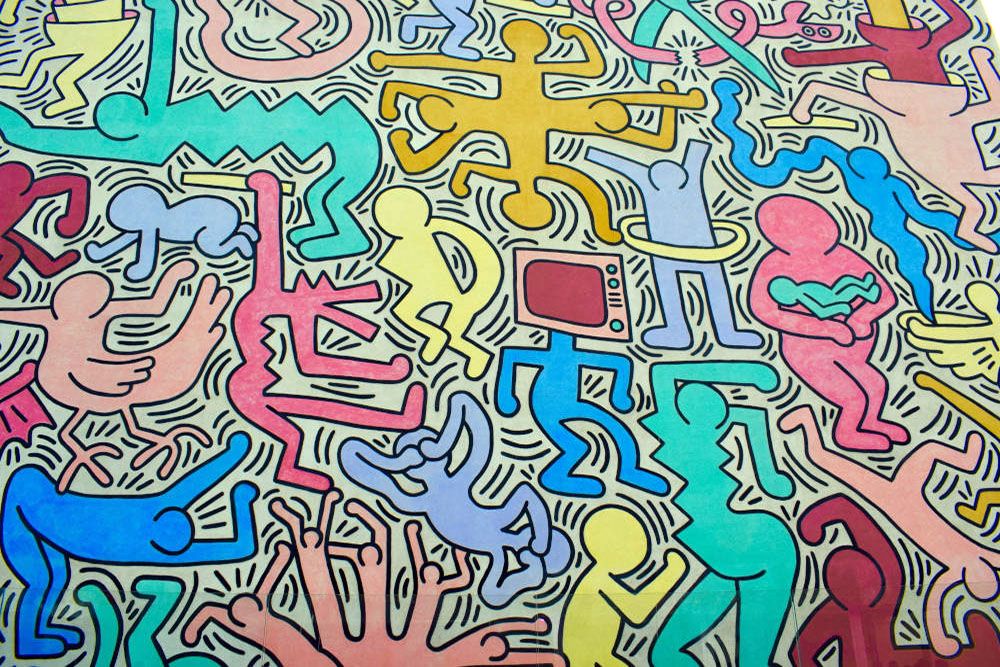 The legacy of Galileo Galilei and other scientists

Galileo Galilei was the most famous resident of Pisa. In the 16th century he made an important contribution to science in many fields. For example, he was a leading astronomer. He was not the discoverer of the telescope, as many believe but he did greatly improve the instrument. With it, he was able to discover the moons of Jupiter.

He was also the one who provided evidence that the sun is the centre of the universe and not the earth. This got him into trouble with the Pope. He was therefore sentenced to house arrest. Only in 1992 was his name restored with the church. He also developed the pendulum clock. The pendulum with which he made this discovery still hangs in the Cathedral of Pisa. He carried out several experiments on the tower of Pisa to determine how fast something could fall down.

But Galileo Galilei was not the city’s only scientist. Already centuries before, in the 12th and 13th centuries, Pisa was the centre of science. Many important scholars were involved in various inventions. This walking route shows you special places from the life of Galileo Galilei. You will also meet other scientists from earlier times. 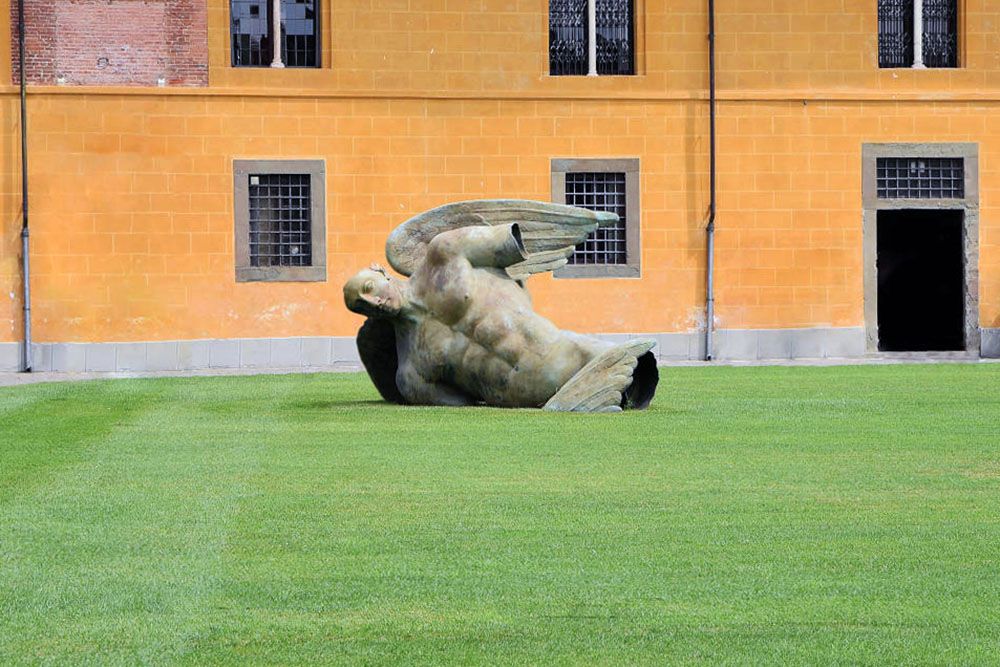 What could be more fun than a themed walking tour that takes you along the sights of Pisa? The tourist office of the city has several of these trails. Depending on your interest, you will discover special places in the city that fit the theme. You can find them all on this website. Click on the tab “itinerary” and the walks will appear. If you then click on a walk, you will get detailed information. Each route is accompanied by a map and a description of the places of interest. 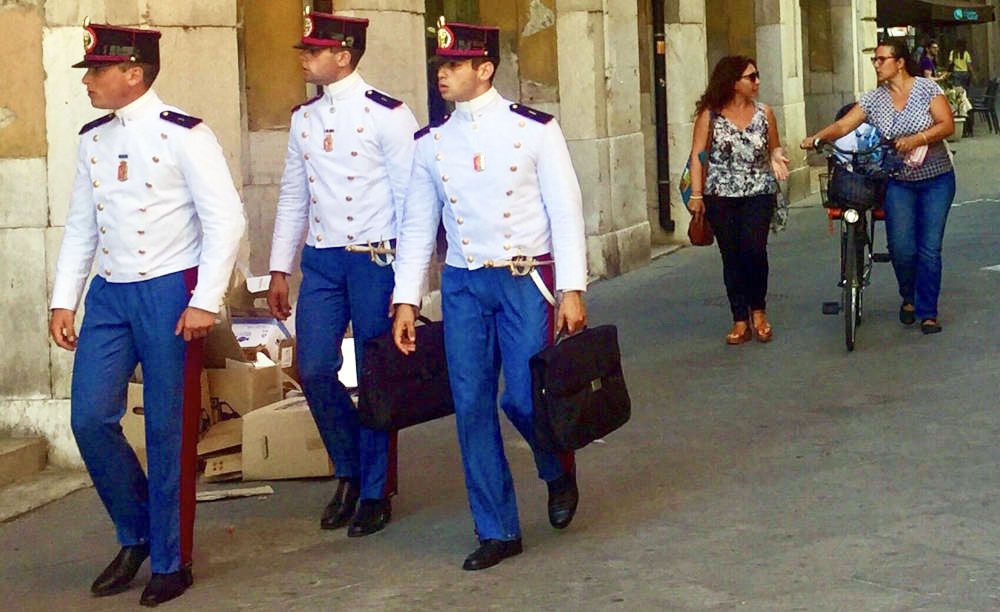 Bike to the sights of Pisa

Another fun way to discover all the beauty of the city is by bike. With a guide, such a tour is even more interesting. You will hear special anecdotes about the history of the city. And of course you will visit the most important sights of Pisa. Baja Bikes has been organising these bicycle tours for years to the full satisfaction of the participants. We like to use them often. Every time we get to know a city really well this way. 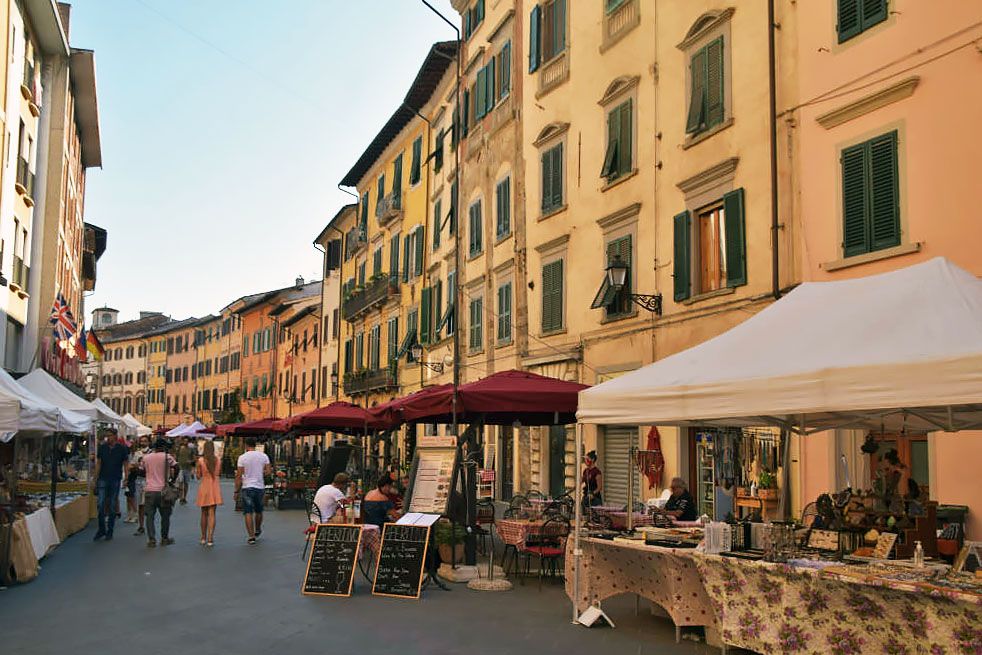 Answers to your practical questions about Pisa

How do I get to Pisa?

The simplest and fastest option is to fly to Pisa's Galileo Galilei Airport. From there, the Pisa Mover, an unmanned mini-metro, will take you to the centre in a few minutes.

Would you like to explore the surroundings of Pisa and Tuscany further? Via Zest Car Rental you can quickly arrange a rental car. Everything is included, so there are no surprises.

What is the best time to travel to Pisa?

The best time to travel is in the months of May and June, or September and October. Try not to go in July or August. The heat makes it oppressively oppressive. There are also many more tourists then.

Where can I park my car in Pisa?

Around the centre there are several paid car parks. A cheap way is parking at one of the two car parks along the route of the Pisa Mover. These car parks are called Parking Aurelia and Parking Goletta. The unmanned mini metro Pisa Mover runs to the centre in just a few minutes. Parking for up to 18 hours and two return tickets with the metro cost only a few euros.

Where can I eat well in Pisa?
What are the best places to stay in Pisa?

This is the complete list of all accommodations in Pisa. 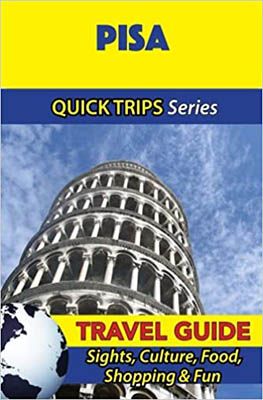 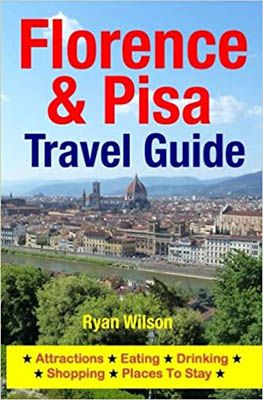 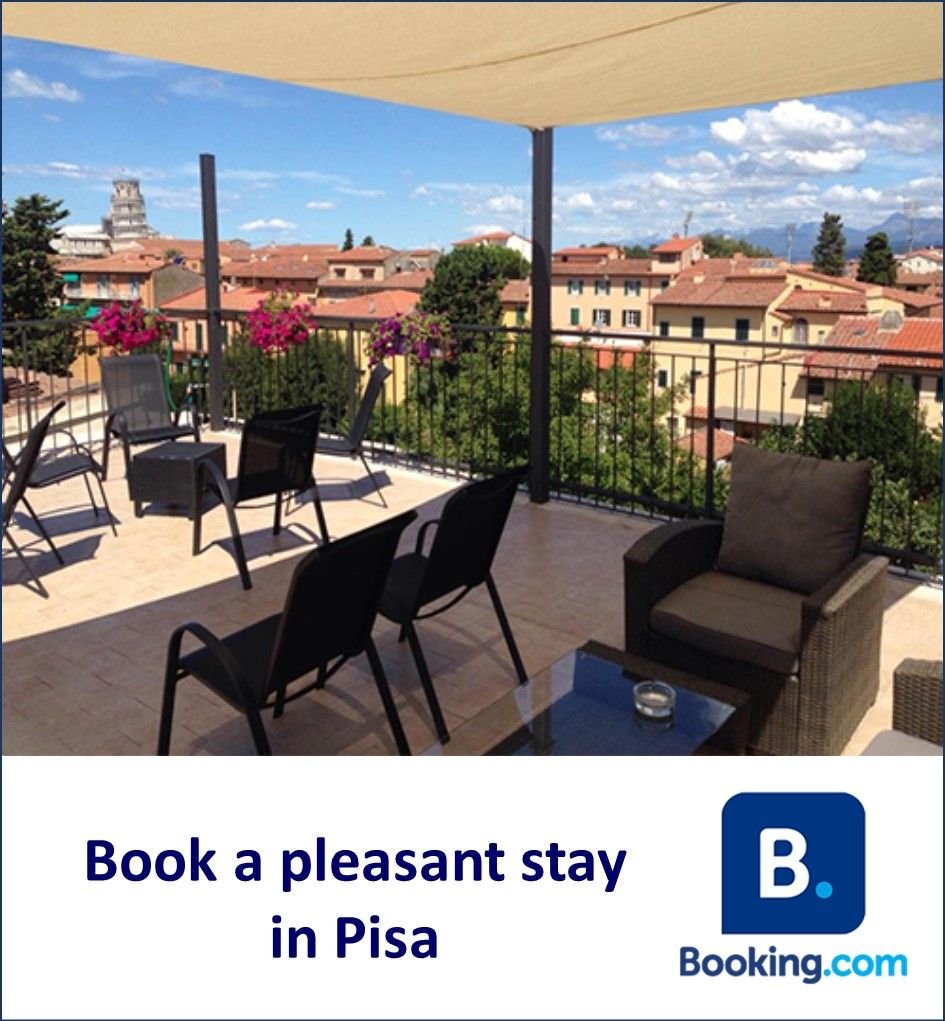