City trip to the lovely student city of Münster

During your holiday by car through Western Europe you should not skip the German Hanseatic city of Münster. In this city with a rich history, students seem to have invented terrace life. This in combination with culture and beautiful parks and your city trip is complete.

Münster was founded in 794 AD as a monastery to help Charlemagne get the Saxons under control. In 805 Münster became a diocese and in 1170 it was granted city rights. During the Second World War, more than 90% of the city was lost in the Allied bombing raids. In the 1950s, however, large parts of the city centre were reconstructed, in particular the historic town hall and the Prinzipalmarkt.

Today Münster is a fast-growing city of about 300,000 inhabitants. The city is especially known for its university, the many churches and the rich culture. 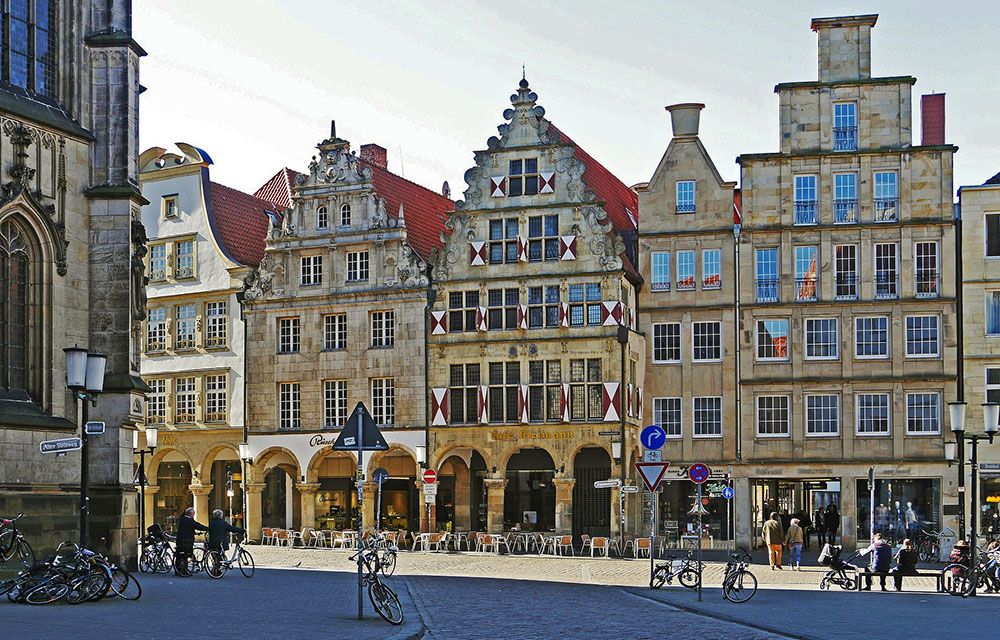 The Friedens Saal (Peace Hall), located in the Old Town Hall, is known for the signing of the historic Treaty of Münster in the spring of 1648. The signing of this document of the Peace of Westphalia ended the Thirty Years’ War in Europe. But also the Eighty Years’ War between Spain and the Netherlands came to an end at that time.

During the Second World War, the town hall was bombed but completely reconstructed in the 1950s. The Peace Hall still looks exactly the same as it did then. As a visitor you can also sign the treaty.

The old town hall is located at the Prinzipalmarkt, formerly the most important market place in Münster. On the elongated, narrow square are beautiful old buildings with beautiful pediments (gable triangles). The square stretches from the St. Lambert’s Church to the Town Hall. You will find luxury shops and nice cafes. The Prinzipalmarkt is considered one of the most beautiful squares in Germany. 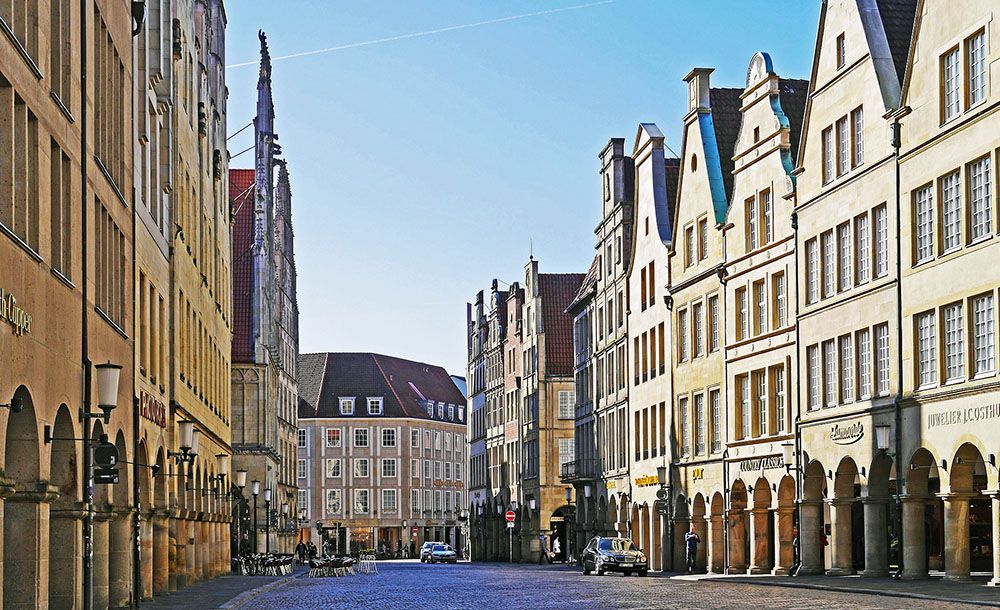 The many churches of Münster

Münster is known for its large number of churches. One of the most beautiful churches is the St. Lambert’s Church from the end of the 14th century. This church is particularly known for the chilling story about the three cages at the top of the tower. In these cages hung in the middle of the 16th century the corpses of the three leaders of the Anabaptist movement who had proclaimed the city the new Jerusalem.

Another beautiful, somewhat smaller church is the half-hidden, baroque Clemenskerk from the middle of the 18th century. This church belonged to the convent and hospital of the Mercy Brothers. The round central building with dome and the beautiful interior was completely reconstructed after the Second World War. Nowadays concerts are held there, as well as church services in languages other than German.

But your visit to Münster is not complete without having seen St. Paul’s Cathedral. The cathedral was built in the thirteenth century on the spot where another cathedral used to stand. It is one of the oldest buildings in Münster. One of the most impressive elements of the church is the astronomical clock from the late Middle Ages, whose calendar goes up to the year 2071.

The peace negotiations between the Netherlands and Spain took place in the House of the Kramer Guild, one of the oldest guild houses in Münster. Eventually, this beautiful, historic building was renamed the Haus der Niederlande at the end of the 16th century. Nowadays you can find various institutions here in the field of the Dutch language, literature, history and politics.

In the picturesque park landscape around Münster there are many castles and beautiful country houses that can be reached by bike or even on foot. One of them is the city castle. This castle from the middle of the 18th century was initially the residence of the prince-bishop. Nowadays the castle is used by the university. Three times a year the large annual fair takes place on the castle square. On the square is also the central lecture hall of the university, where conferences and concerts often take place.

The Münster City Museum should not be missing from your visit to the city. In the free museum the rich history of Münster is beautifully illustrated. Other interesting museums in the city are the museum of art and culture on the Dom square, and the art museum Pablo Picasso.

Kuhviertel is a pleasant area where you will find most restaurants, student cafes and terraces. In the summer, you’ll find wooden tables with benches everywhere where people come to eat and drink. In this district you also have the only remaining private brewery of the 150 that were in Münster in the 19th century. The traditional cuisine in the district is Westphalian with classics like Töttchen and Pfefferpotthast (more about Westphalian cuisine later in this blog).

The old city harbour of Münster is nowadays the hippest district of Münster. The combination of converted warehouses and modern architecture makes the district so special. Because many creative companies (including architects and advertising agencies) and artists settled in the district, a new name has been given to the district: Kreativkai.

Thanks to the art, culture, many restaurants and clubs, there is always something to do. One of the popular attractions in the district is the Hot Jazz Club where concerts (not only jazz) are held every weekend. Another attraction is the exhibition hall for modern art. Here you’ll find 30 art studios in a converted pantry.

One of Münster’s highlights is the harbour festival that takes place once a year. For three full days, the harbour and the promenade form the backdrop for many musical and sporting activities.

At 15 minutes walking distance from the Prinzipalmarkt is the Aasee, a lovely lake for walking or cycling, or just to relax. You also have a sailing school and some sailing clubs, where you can rent a sailing boat to explore the water. Around the lake there are plenty of places to eat and drink. 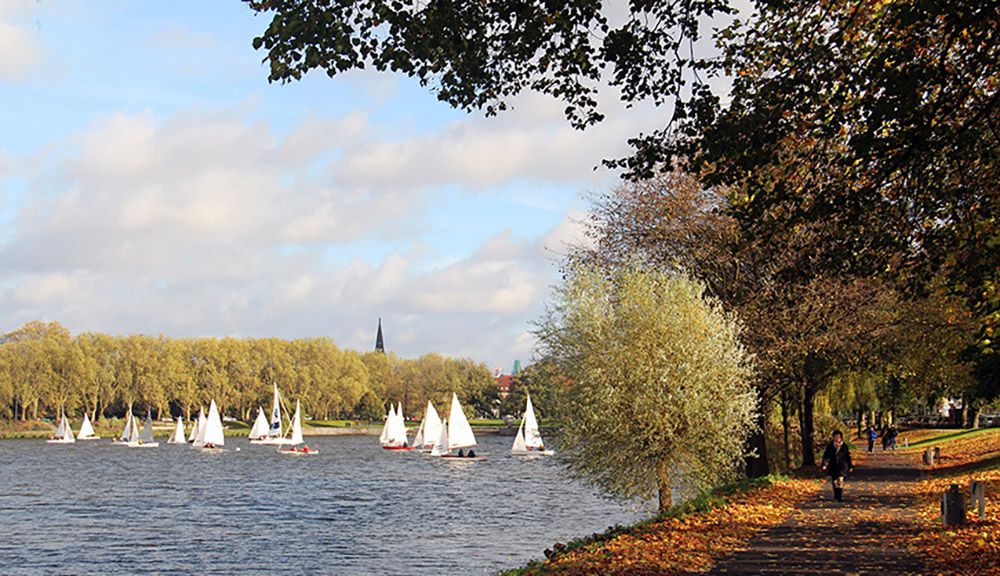 Activities outside the town

Biking through the beautiful park landscape around Münster

If you like cycling, Münster is the city where you should definitely go for a long weekend. Around the city are more than 4,500 hundred kilometers of signposted bike paths through the beautiful, mostly flat landscape.

A typical example of some of the many marked, attractive cycling tours to castles, stately country houses, historic churches and idyllic villages is “Auf den Spuren der Annette von Droste-Hülshoff” of 28 kilometres. More information about this cycling tour. But there are also longer themed routes, such as the “Auf den Spuren des Westfälischen Friedens” from the town hall of Münster to that of Osnabrück. More information about the Friedensroute (in German).

Castles and fortresses in the vicinity of Münster

In the village of Nordkirchen, about 30 kilometres south of Münster, there has been a beautiful palace since the beginning of the 18th century, also called the Versailles of Westphalia because of its fantastically beautiful gardens. The castle is open to the public all year round.

Another castle that is well worth a visit is Vischering Castle in Lüdinghausen, near Nordkirchen. The castle, including the moat and collection castle, is still in very good condition. In the museum you get an impression of life during the Middle Ages in Münsterland.

Hülshoff Castle is located about 10 kilometres west of Münster. This castle has been in family ownership since the 15th century. One of the most important poets from Germany of the 19th century, Annette von Droste-Hülshoff, was born here and lived there. Nowadays there is a museum that depicts the life of the Munster noble family from that period. In the large, beautiful garden you can take a nice walk. 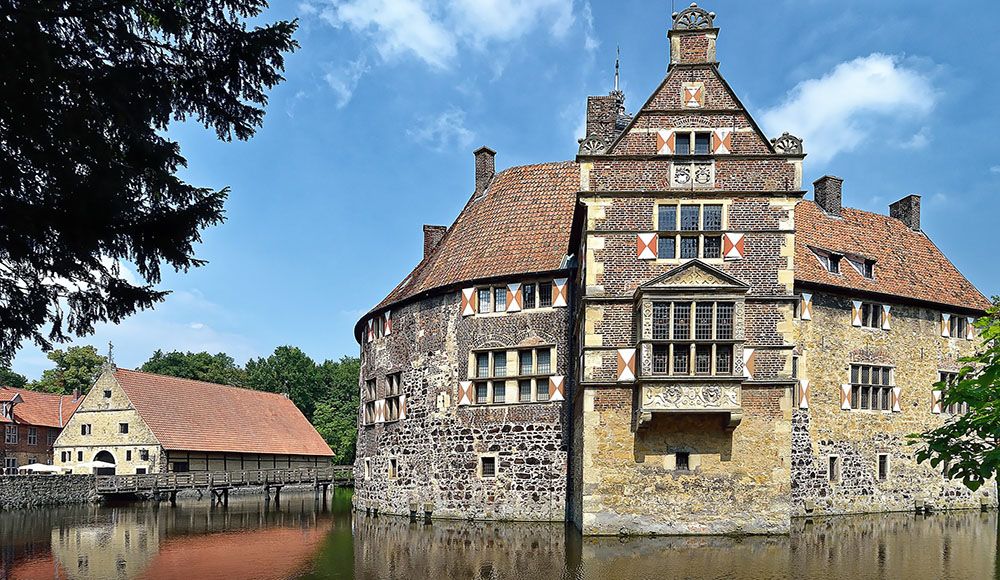 There are plenty of hotels and apartments in Münster. We stayed at the Hotel Münnich, a cosy hotel just outside the city. Excellent breakfast and a perfect location for if you want to walk and/or cycle outside the city centre!

The Westphalian cuisine is quite simple, nutritious and hearty. Think of bacon and eggs, ham, sausage, but also bread and (of course) beer. The best-known regional specialities are Töttchen (veal ragout) and Pfefferpotthast (a delicious simmering beef dish with capers and onions). Many eateries in the city serve these dishes.

One of the delicacies of the region is the Westphalian ham on the bone, which many believe can compete with Parma ham and Serrano ham!

Every good meal should be accompanied by an appropriate drink. In Münster and the surrounding area it is a locally brewed beer. The most famous beer brewery in Münster is Brauerei Pinkus Müller, but most pubs also serve various beers from other breweries such as Finne Brauerei, Läuterwerk and Kemker. 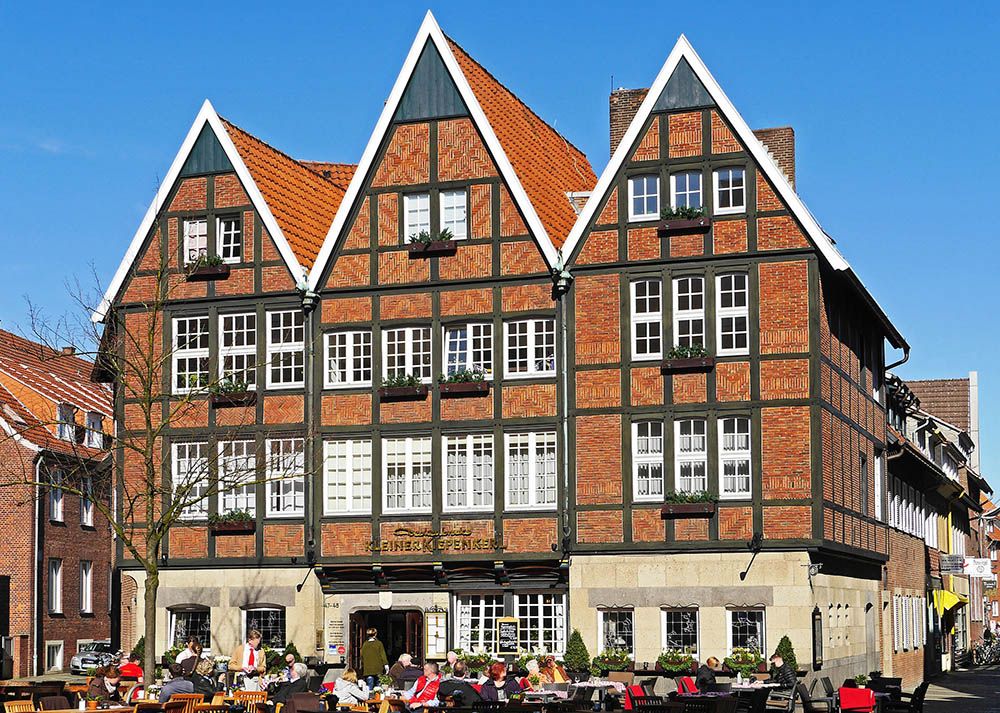 Münster is a city for cycling enthusiasts. Almost every inhabitant regularly uses the bicycle for short distances. Along most of the sidewalks there are also red marked bicycle paths. Some streets are marked as “bicycle streets”, where the car – as you have in the Netherlands – is only “a guest”. In addition, there is a car-free ring road around the town centre that has been specially constructed for cyclists.

You can rent a bike at MünsterlandRad Fahrradverleih, Hof zur Linde, Landhaus Eggert, Fahrrad Look and Zweirad Weigang. In short, plenty of possibilities! And if you take the Münster Card, you can even borrow a bike for free at the central station!

If you’re not a cyclist, don’t worry: most sights can also be reached on foot. In addition, there is a fantastic footpath around the city centre and the medieval city walls. The walk also takes you through a park along the beautiful Lake Aa.

Best travel time for a city trip to Münster

The best months to visit Münster are May to September when it is (pleasantly) warm. In June, by the way, it is extra nice, among other things thanks to the Hafenfest. 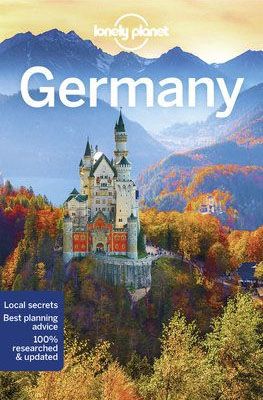 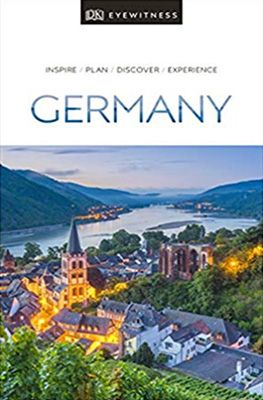