Verona, the perfect stop on your tour of northern Italy

Verona, the perfect stop on your tour of northern Italy

Home » Italy » Verona, the perfect stop on your tour of northern Italy

Even before corona, we went on a beautiful car trip through Austria, northern Italy and France. In order not to drive too many kilometres in one day, we planned a stopover in Verona. We only knew of the city by hearsay. The greater our surprise when we arrived there. Verona turned out to be a fantastically beautiful and wonderfully relaxed city! We could easily spend several days there. Read why in this blog. 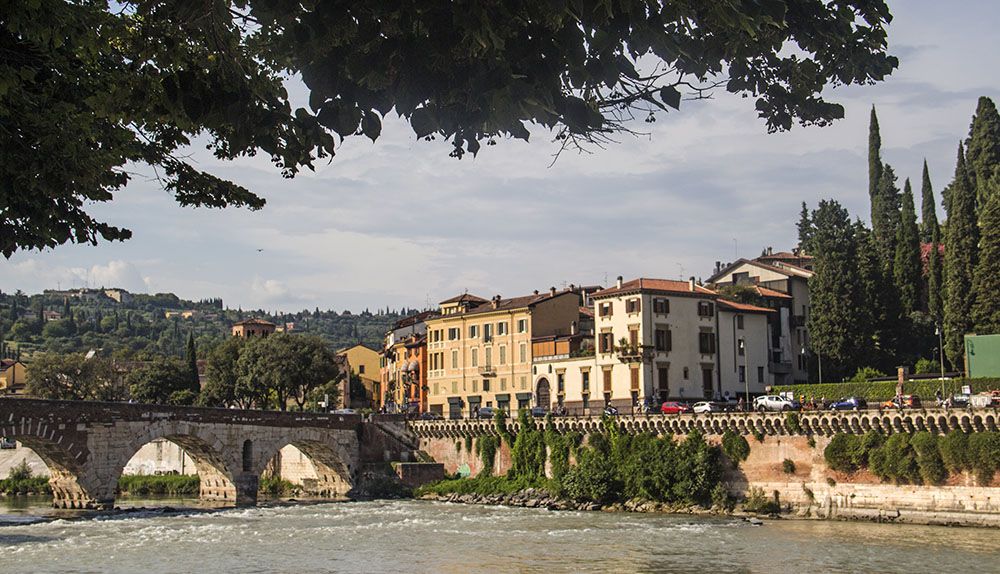 The origins of Verona are not yet clear. The city was probably founded by an ancient Italian or Celtic people. About 2100 years ago, it became a municipium (city colony) of the Romans. Thanks to its location at the intersection of four of the most important Roman roads, Verona became an important city. At that time, impressive gateways and a large amphitheatre were built.

With the fall of the Roman Empire, Verona was conquered several times. Finally, in the 13th century, it fell into the hands of the Scaligeri dynasty. This family fortified Verona and further expanded the city’s influence. A brief period of peace, prosperity and art began. It was with good reason that Dante, Petrarch and Giotto found their homes there.

But family feuds finally took their toll towards the 15th century. Verona then came under Venetian rule. The large city gates Porta Nuova and Porta Palio date back to this time. At the end of the 18th century, the city was conquered by Napoleon. Verona was then given to Austria as a war trophy. It was not until the unification of Italy in the middle of the 19th century that the city became Italian again.

At the end of the 19th century, a terrible flood destroyed a large part of the historical centre. The city walls were then erected to better protect Verona. Unfortunately, the walls could not withstand the bombs of the Allies in the Second World War. Even the bridges were destroyed when the German occupiers withdrew. The reconstruction and restoration work ultimately took a long time. But the end result is definitely worth it! 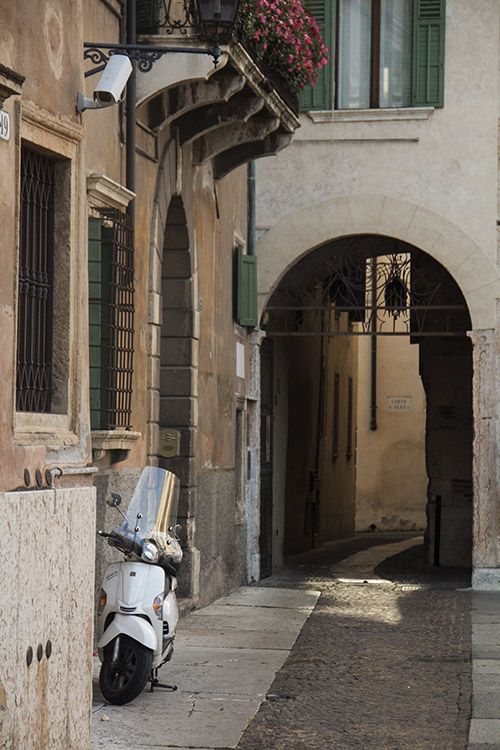 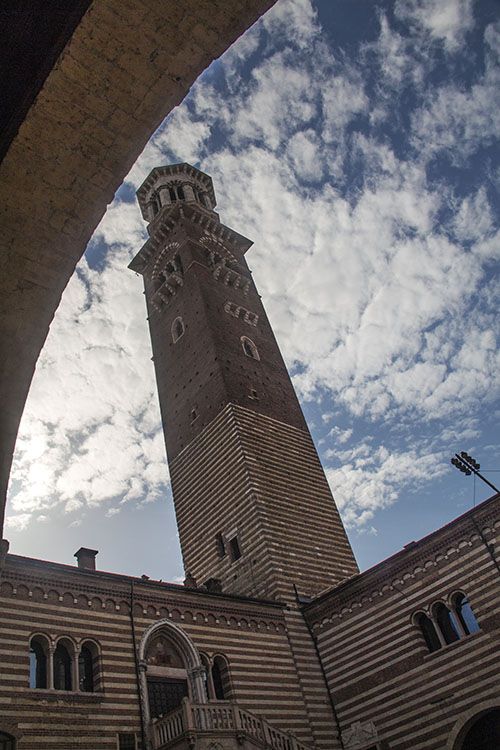 Verona is the setting for Shakespeare’s greatest love story. However, the city has more to offer than just Romeo and Juliet. It is also said that romance, conflict and conquest shaped Verona. But it is the Roman, medieval and Renaissance architecture that has made the city a UNESCO World Heritage Site.

An ideal way to get a first impression of Verona is with a bicycle tour of Baja Bikes. You will learn your way around the city and see the most important highlights. The tour with e-bikes that they offer in Verona has a ‘Romeo and Juliet’ theme.

We found Verona to be one big open-air museum. Everywhere you find (skilfully restored) beautiful buildings from times gone by. Strolling through the narrow streets and across large squares was an experience in itself. Our walk along the Adige River made our city trip really complete. We did this walk from the other side of the river. The view of the city and the many historical bridges changes constantly but remains beautiful.

In this blog, we will take you to some of the sights you simply cannot miss. 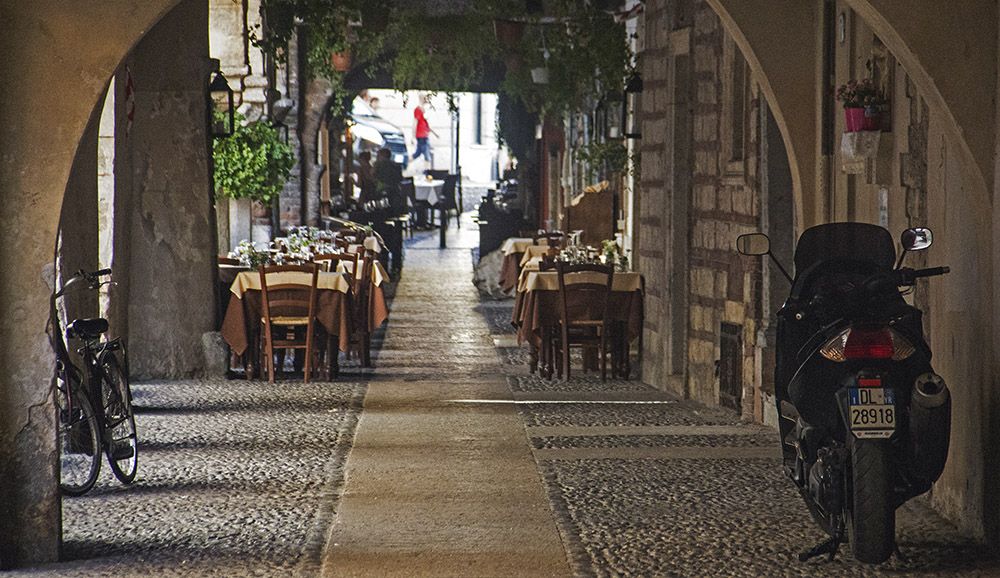 The Arena is the third largest ancient amphitheatre in the world. The Romans built it in the 1st century. The spectacular amphitheatre has an elliptical shape. A large part of the outer ring was damaged in the earthquake of 1117. The inner part remained intact and is still used for operas in the summer. There is room for no less than 20,000 spectators!

In Roman times, Piazza delle Erbe was the city’s Forum (main square). There are many places of interest in this beautiful square. On the northern side, you will find the old city hall, the Casa dei Giudici (courtroom) and Mazzanti houses decorated with frescos. The 84-metre-high Torre dei Lamberti from the end of the 12th century is also located there. It is the highest tower in Verona. You can reach the top via the courtyard of the palace. You can climb the 238 steps or just take the lift. The view is absolutely breath-taking.

On the west side, you will find the baroque Palazzo Maffei, decorated with statues of Greek gods. Inside, there is a special stone spiral staircase. It leads from the underground shops to the roof via steps that become narrower and narrower. On the south side, you will find the former Casa dei Mercanti with its crenellated roof. This building from the 13th century was home to the city’s guild of merchants.

The oldest monument in the square is the 4th-century statue of the Madonna Verona. This statue is located on top of a fountain from the 14th century. 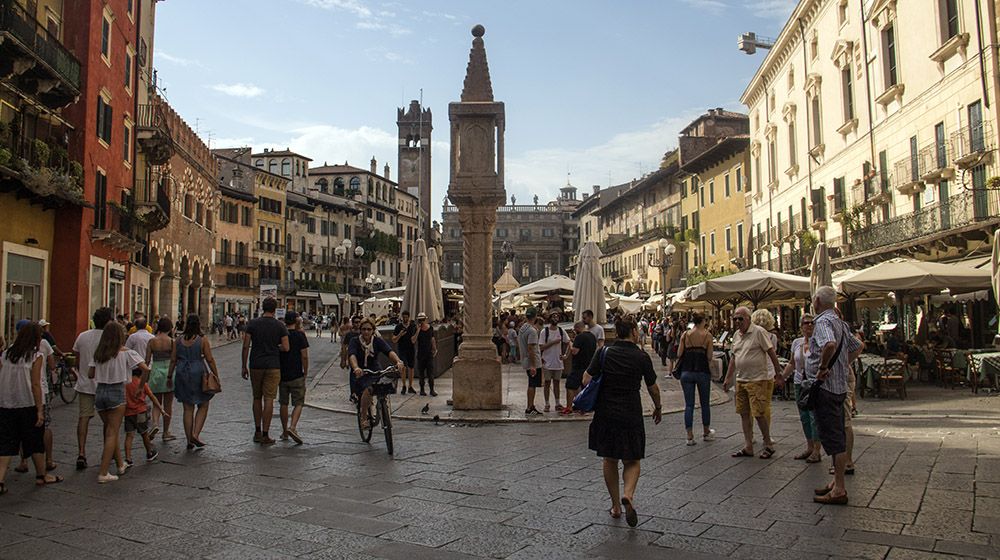 The Castelvecchio is a red-coloured 14th-century castle on the banks of the Aldige. It was the most important fortress of the Scaliger dynasty. Today, it is a museum with a rich collection of medieval sculptures and Renaissance paintings. We particularly liked exploring the castle ramparts. For a beautiful view of the castle, walk via the ‘Ponte di Castelvecchio’ to the other side of the Adige River!

The Colle San Pietro is a hill on the eastern bank of the Adige River. It is the hill with perhaps the most beautiful view of the city. In Roman times, the hill had a religious function. Among other things, there was a temple there. In the Middle Ages, a church, St Peter’s, was built on the remains of the temple. The hill then received its current name. Because of its strategic location, a citadel was built on the hill. In the early 19th century, the Napoleonic army destroyed most of the old buildings of the citadel. With the arrival of the Austrians, the castle and the church made way for a barracks. These barracks are still there but are closed to the public.

Still, the top of the hill should not be missing from your city trip. The view of the city is fantastic. This is especially true during sunset. You reach the viewpoint via a staircase from Ponte Pietra near the Roman Theatre. Another option is the cable car. Afterwards, a pleasant walk takes you back to the Roman theatre. 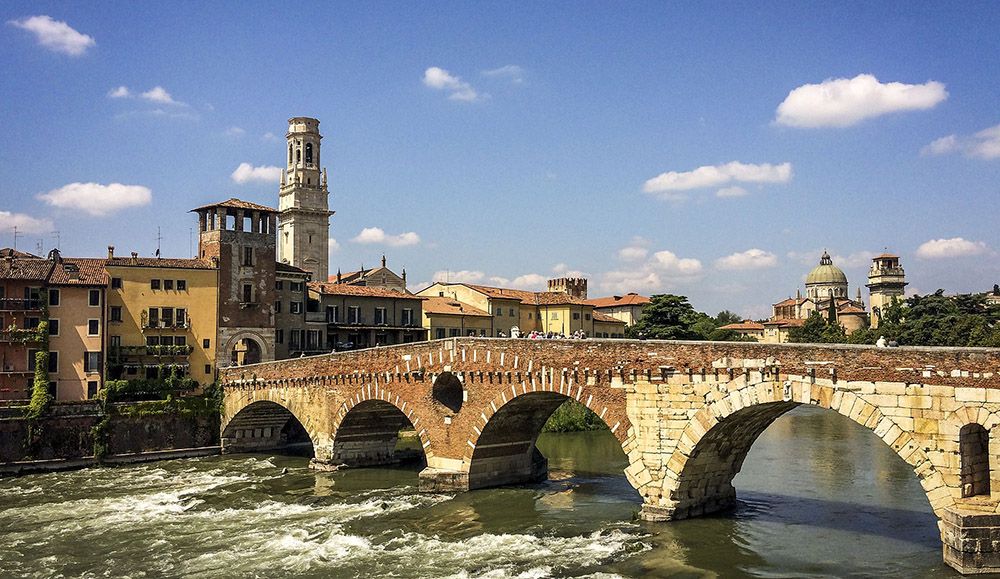 On the site of the present cathedral there used to be a church from the 8th century. That church was destroyed in the 1117 earthquake. The special feature of the cathedral is its decorated marble Romanesque façade. Stone reliefs around the doorway contain biblical scenes. The smaller side door is also worth a look. The medieval carving in the door shows Jonas being swallowed by a whale. There is also a Romanesque baptistery and a collection of medieval paintings.

In Via Cappello, near Piazza delle Erbe, is the Casa di Giulietta. It is said to be the location of the famous love scene on the balcony of Shakespeare’s Romeo and Juliet. It is a popular tourist attraction, especially for young couples in love. The striking thing is that the house has nothing to do with Romeo and Juliet. Although the house itself is centuries old, the balcony dates from 1936. Long after Shakespeare wrote his love epic. Still, it is nice to take a look here. If only for the pilgrimage site status it has for young couples. 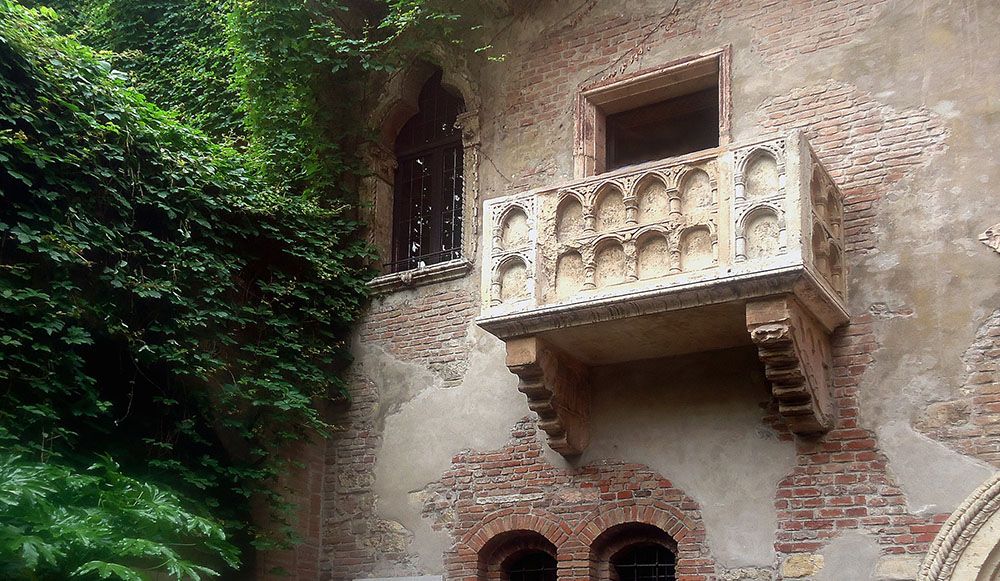 Just outside the centre is the Basilica of San Zeno. It is one of the largest and best-preserved Romanesque churches in Italy. The church is dedicated to the North African Zeno, the patron saint of Verona. Zeno became bishop of Verona in the 4th century. His grave lies very gracefully under the church. The church itself was a European place of pilgrimage for centuries. You can still see the ‘signatures’ that pilgrims have left since the end of the 14th century.

Verona has a number of perfectly preserved Romanesque city gates. The main entrance was the Porta Borsari. This gate still contains an inscription from the year 245. The road that runs under the gate is the original ‘Via Sacra’ of the Roman city. Today you can see several Renaissance palaces and the old Apostolic Church.

Porta Leoni is another gate from the 1st century BC. The largest part is still part of the wall of a medieval building. Near the gate is a small courtyard surrounded by towers. Here, carriages and travellers were inspected before entering or leaving the city.

A third city gate of Verona worth mentioning is Portoni della Bra from the late 14th century. Originally, the two arches of the Portoni della Bra were not intended as a city gate. They formed more the passageway between the Castelvecchio and the Citadel.

This city gate is also the place where you should be later in the day. At the Portoni della Bra you will find the biggest square in Verona: Piazza Bra. In this square, you will not only find the Verona Arena. On the north-west side of the square, there are many restaurants and terraces. Especially in the summer months, it is very pleasant here! The quality of the food is excellent. 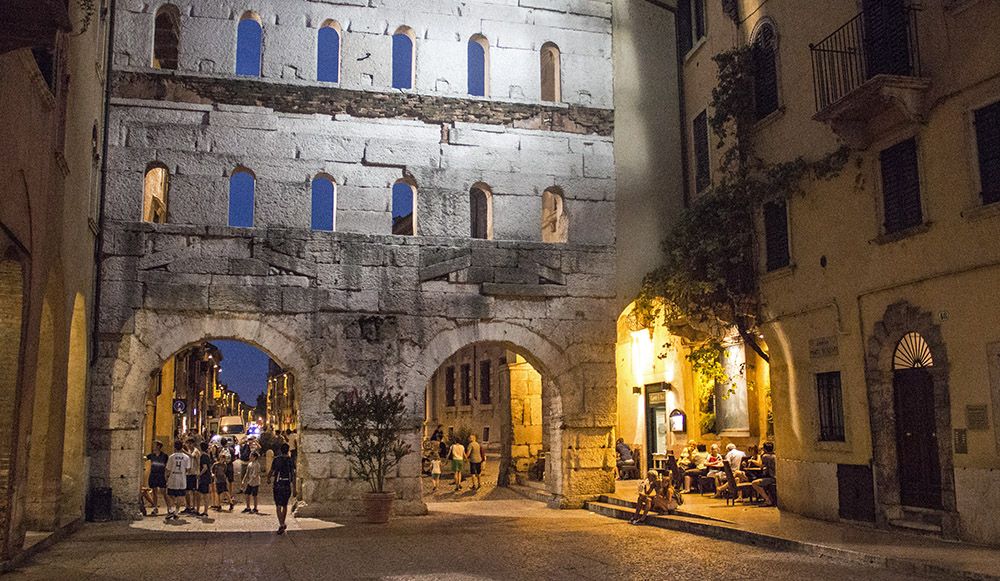 Practicalities for a city trip to Verona

The best months for a visit to Verona are April to September. In the summer months, it can be oppressively hot. Due to its location just south of the Alps, the weather can suddenly change. A beautiful sunny day may end with a heavy thunderstorm. The month of May is statistically the most likely to have rain. In that respect, the months of June and September are more suitable for a city trip. If you want to attend an opera in the Arena, go in the summer months.

Transportation within the city

You can explore the city on foot if you are in good walking condition. Another possibility is to rent a bike. You can do this for example at Itinera Bike or Verona Bike. Would you like to travel through Verona like a real Italian? Then hire a scooter! You can do this at Verona Rent and Two Wheels Verona.

There is a great deal of accommodation to be found in Verona. Many also offer bicycle rental or bicycle tours. We stayed at the pleasant B&B Foroni 29, a stone’s throw from the old town. They offer free parking, which was important to us. We also heard good reviews of the Hotel Milano & Spa from other travellers. Definitely worth considering for a city trip to Verona! 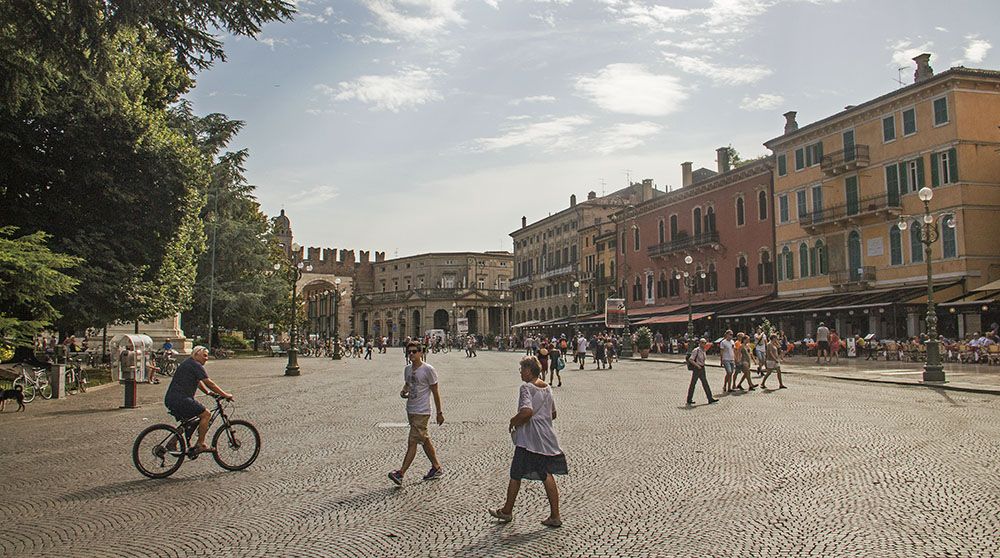 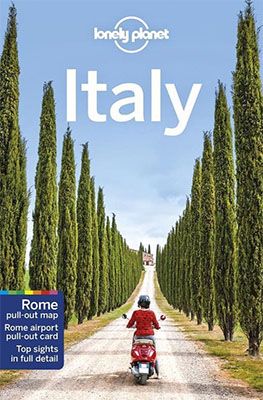 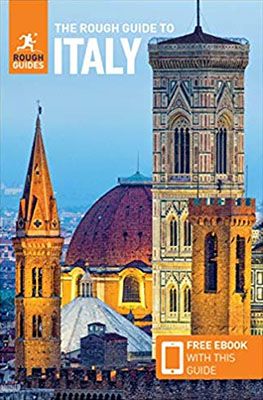