Through the Ubud rice fields with an e-Bike

Home » Bali » Through the Ubud rice fields with an e-Bike

Recently we were back in Bali. The island of the gods has much more to offer than you can experience on just one holiday. One of the highlights of our second visit was an e-Bike ride through the countryside near Ubud. We found that Ubud, although still a nice town, has become busier in recent years. Fortunately, the bike ride took us through an oasis of peace and quiet. 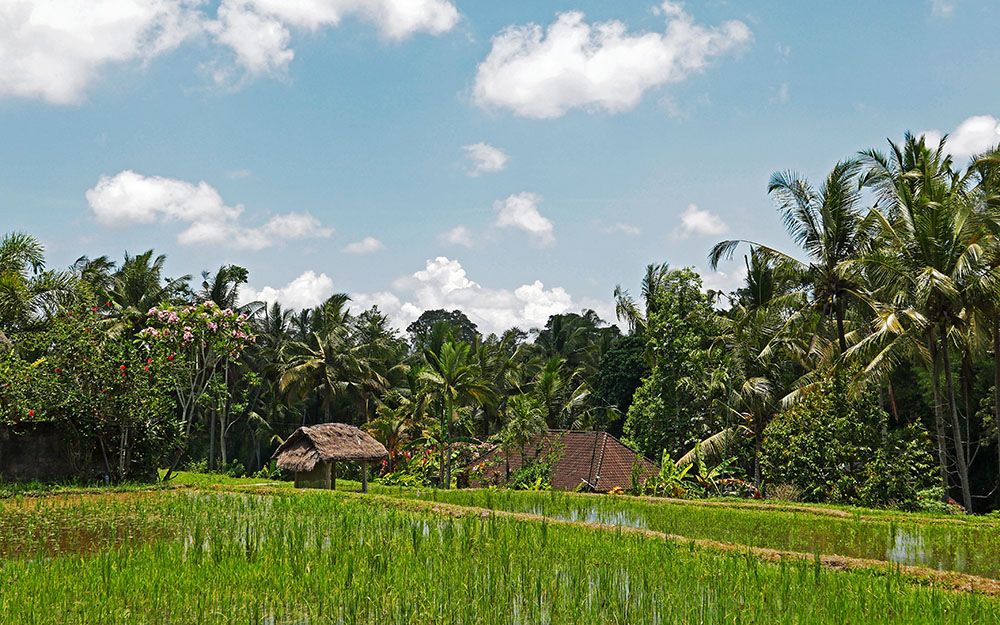 My brother-in-law, who was in Bali a year before us, gave us the tip to go on an e-Bike ride. He gave us the name of e-Bikes Bali. There are several routes on their site that you can cycle. We chose the route from the north of Ubud to the rice terraces of Tegalalang, which are on the UNESCO world heritage list. However, as is always the case with travelling: it’s not the destination but the journey.

After receipt and payment, we got an explanation about the bikes. They look like normal mountain bikes but by pressing a button you can speed forward if you like, without pedalling. Out of habit though, we kept pedalling for most of the trip.

The bike ride started on one of the many through roads north of Ubud, with one guide at the front and the other bringing up the rear. Shortly after that, we turned off the road and continued the trip on narrow, paved paths through the beautiful green rice fields of Bali. Regular stops were made so we could take pictures and get an explanation about the production and harvesting of rice. 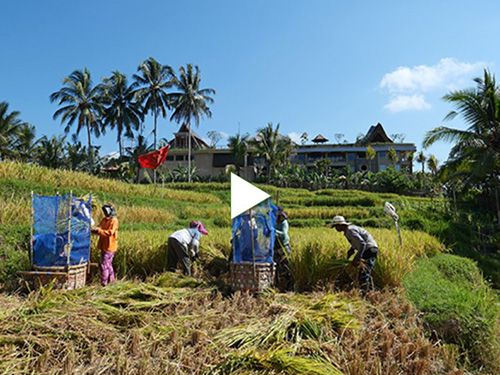 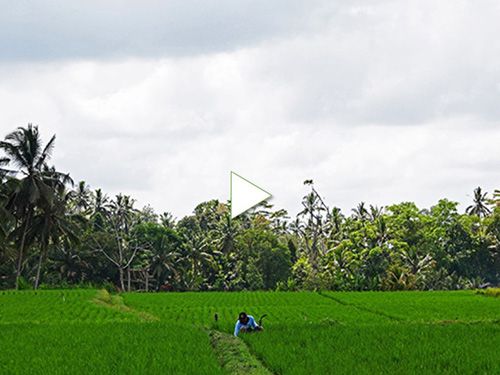 Just before we arrived at Tegalalang, we stopped at a temple where we heard a lot from our guide about the life, culture and religion of Bali. It was very interesting. Fifteen minutes later we arrived at the famous rice terraces of Tegalalang. At a small café, we enjoyed the beautiful view and took pictures of each other on a swing, something every tourist apparently does here.

We continued our trip to a coffee plantation where people make coffee from coffee beans pooped by civet cats. Of course, the beans are thoroughly cleaned before they enter the production process. The end result, the ‘kopi loewak’ or civet coffee, is one of the most expensive coffees in the world. We found the plantation a real ‘tourist trap’ and did not really appreciate the living conditions of the civet cats. 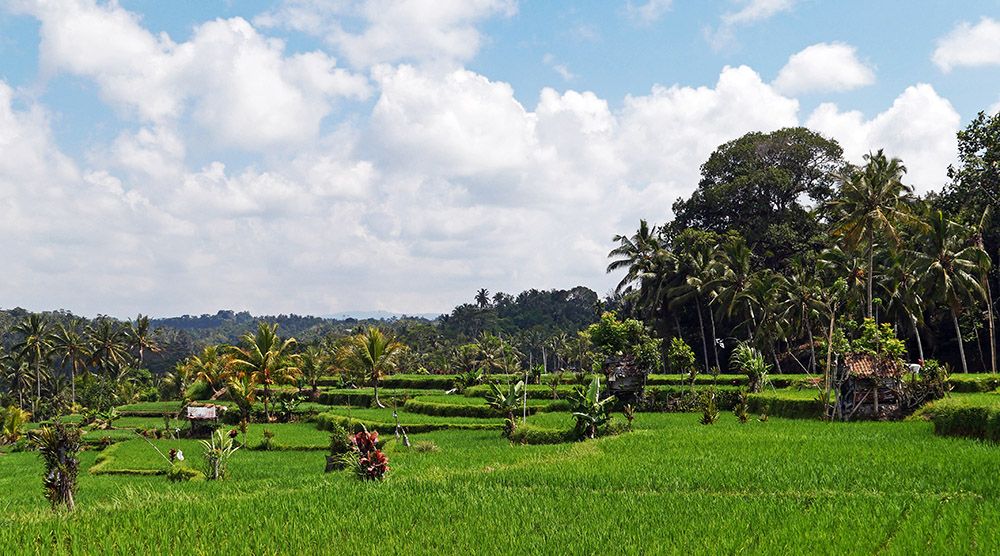 What finally made the visit to the plantation fun was the view of the many, so-called ‘Bali swings‘, one of the island’s newest tourist attractions. Tourists pay a lot of money to swing at an altitude of 10, 15, 20 or even 78 metres above the rice field. It is funny to see the young women going on the swings wearing long skirts. During the swing, their faces disappear completely into their skirts while they scream in shock.

The last part of the great bike ride took us through small villages with a lot of differences in altitude from time to time. After this, we had a good lunch in a nice, not-too-touristy roadside restaurant. All in all, the trip left a deep impression on us, partly thanks to our guide’s extensive explanation. The excursion is undoubtedly one of the things you really must do in Bali. Plus, if you book the bike tour with e-Bikes at e-Bikes Bali, ask for guide Betul. 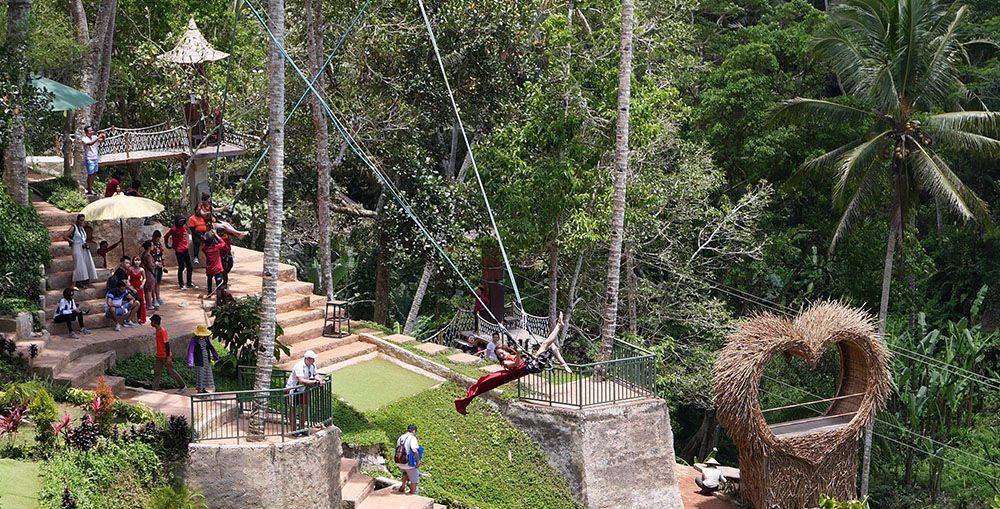 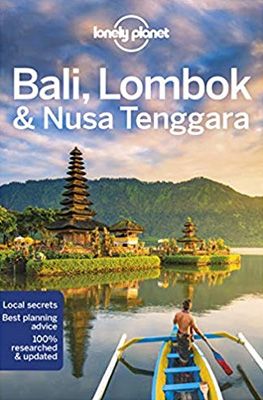 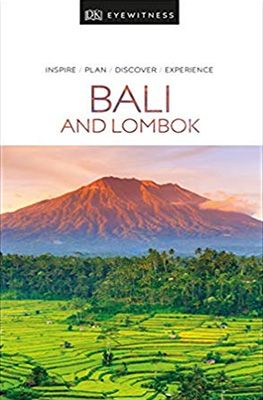