San Marco Square: one of the many highlights of Venice

San Marco Square: one of the many highlights of Venice

Home » Italy » San Marco Square: one of the many highlights of Venice

During our visit to Venice, we naturally visited “Piazza San Marco”. This largest square in the city is the heart of Venice. Not only now, but also in the past. It was the location of the important government buildings and other facilities that were central to daily life. In this blog, we will take you past the most important sights to see at St Mark’s Square.

The “most beautiful salon in the world”

Piazza San Marco originated in the 9th century as a small square with a few trees. It was laid out right next to the original basilica, which used to be just a small chapel. It was not until the end of the 12th century that the square reached its current size of 180 x 70 metres. A hundred years later, the square was paved over. 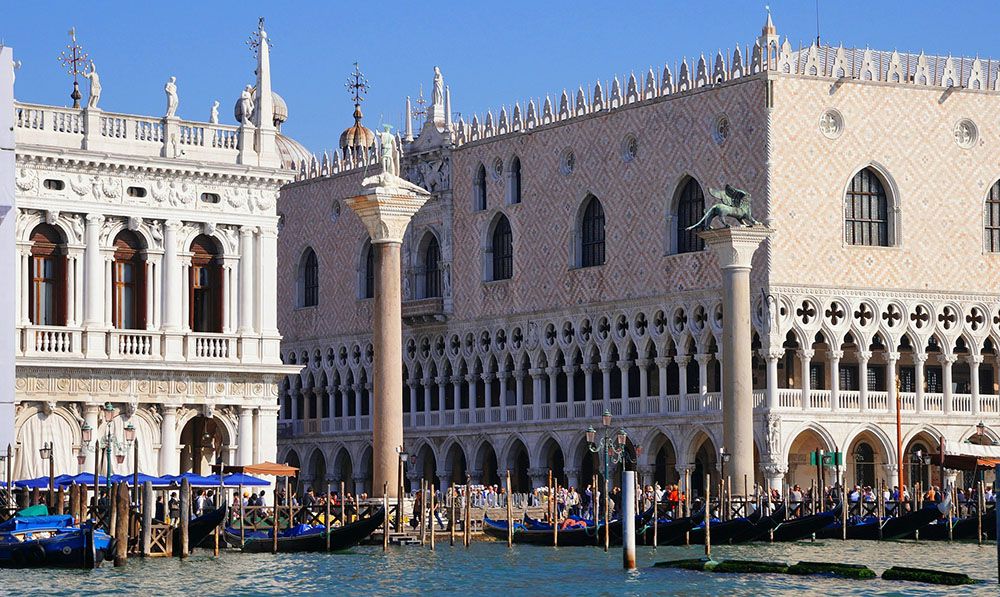 St Mark’s Square is the lowest point in Venice. If the sea level rises more than 90 centimetres, this is the first place to be flooded. Several times a year, the square is completely under water. In Venice, this phenomenon is called ‘Acqua Alta’. The inhabitants have been experiencing it since the Middle Ages. It happens mainly in winter and spring.

When the sea level starts to rise, sirens sound to warn the population and the authorities start placing wooden footbridges. During these days, the residents do not leave their houses without their wellies.

Although many tourists want to experience the Acqua Alta, it is a serious problem for Venice and its inhabitants. The salty water certainly does not do the cultural heritage any favours! Since 2003, the authorities have been working on the construction of a (storm) flood barrier, called MOSE. In 2020, the construction project (subject of much criticism) was completed. In the same year, the flood barrier definitely proved its worth. 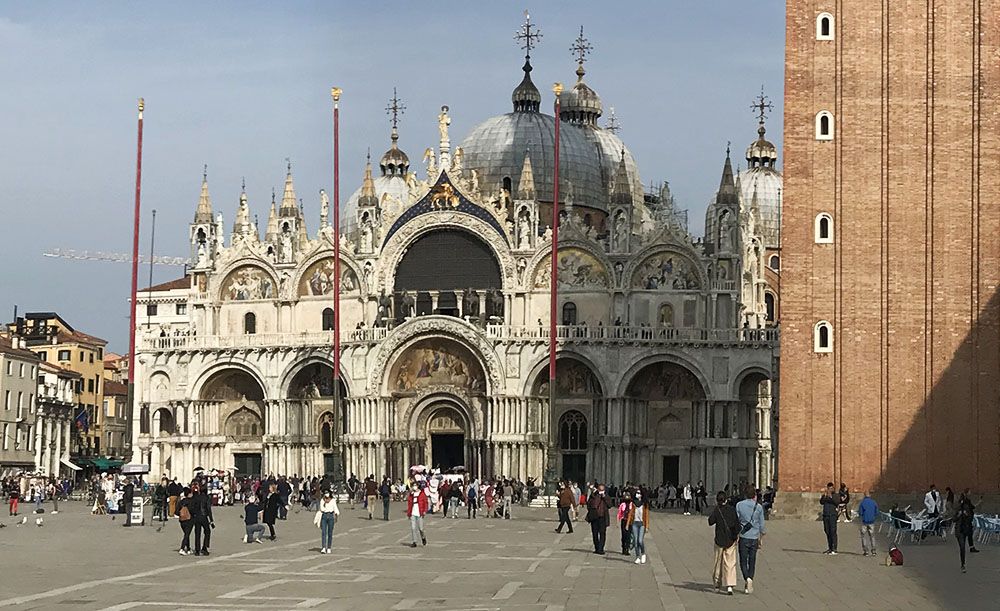 You can easily spend many hours in St Mark’s Square. Here are some of the sights you really must see! But don’t forget to walk from the square to the waterfront because you will find Bacino Orseolo here, a starting point for gondola rides. You get a beautiful view of the San Giorgio Maggiore skyline from this spot.

The Doge’s Palace was originally a fortified castle from the 10th and 11th centuries. After a major fire, the castle was rebuilt in the late 12th century. The palace was used as a fortress and a prison in this period. Afterwards, the building became the residence of the Doge, the leader of the Republic of Venice. The Doge also held his office there and the big meetings took place there. Since then, the palace has been a symbol of the powerful and rich past.

By the way, the Doge’s Palace is not only impressive on the outside. Inside, you will find a golden staircase and large rooms decorated with beautiful frescos. For example, there is the largest oil painting in the world: Paradise by the 16th century painter Tintoretto. The visit of the palace also takes you to the arsenal. Here, you will see an extensive collection of weapons from various periods. The final piece is the prison and the famous Bridge of Sighs. The melancholic name has to do with the moment the condemned crossed the bridge. They saw the lagoon for the last time. 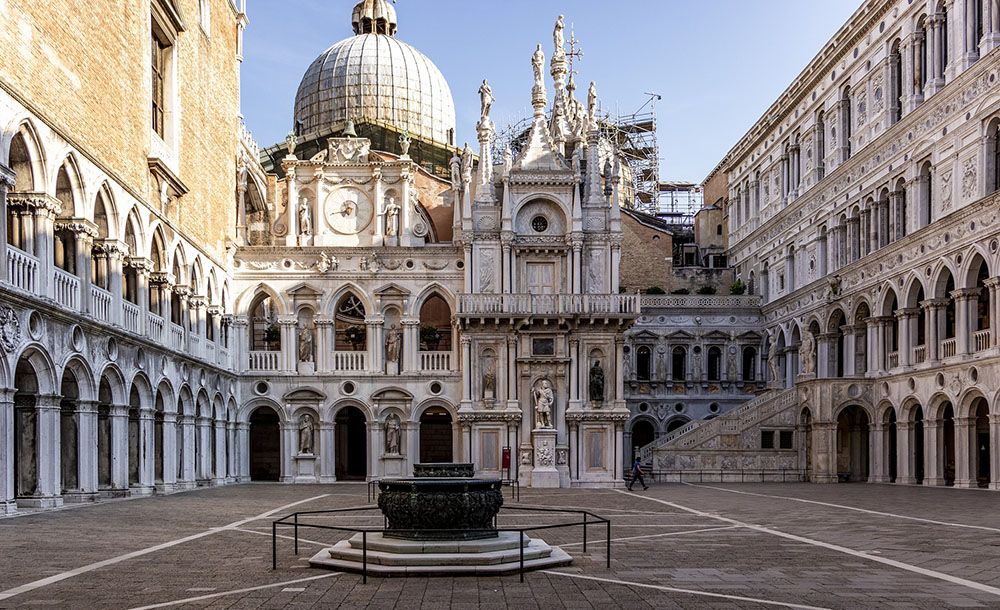 Next to the Doge’s Palace is the pompous Basilica of San Marco. The construction of the basilica, which was originally to be an extension of the palace, began in the early 9th century. Its purpose was to house the relics of St Mark that had been smuggled out of Alexandria. Although the present building dates back to the 11th century, it has been renovated and adapted over the centuries.

The current basilica is built in the shape of a cross and has five domes. The structure has over 4,000 square metres of mosaics (some dating back to the 13th century) and 500 columns dating back to the 3rd century.
The interior of the basilica is predominantly golden, hence the nickname ‘Golden Church’. The main dome, the Ascension Dome, contains mosaics depicting passages from the New Testament. The mosaics in the atrium depict passages from the Old Testament. They are made of small glass tiles with gold leaf on them. The relics of St Mark are in the main altar of the church.

Although entry to the basilica itself is free, other areas such as the museum require a ticket. But if you have the time, don’t miss the museum, if only to admire the horses of San Marco! The four gilded bronze horses were originally in the Hippodrome of Constantinople. They were stolen during the Fourth Crusade. 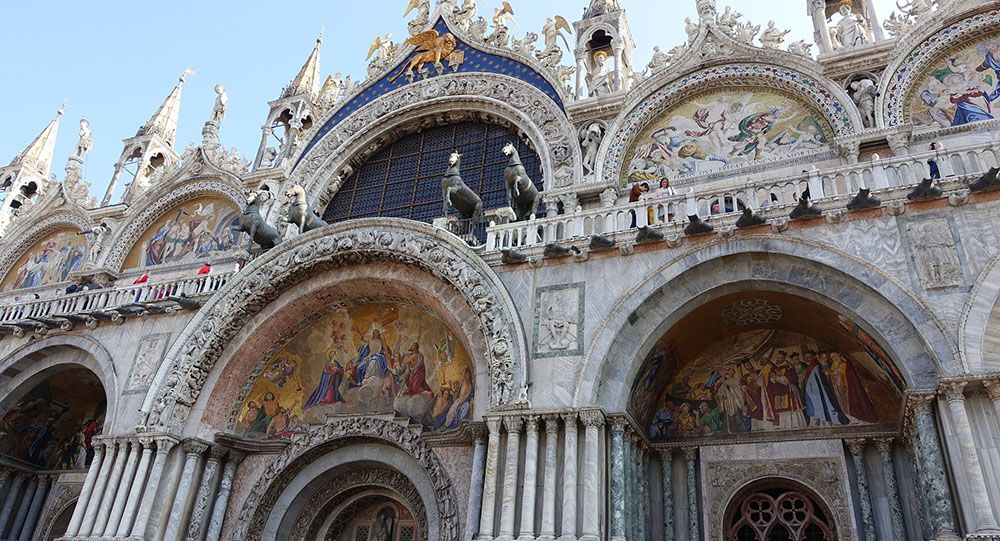 The Campanile is the bell tower of the Basilica of San Marco. With a height of almost 99 metres, it is the tallest building in Venice. It offers a beautiful view over the city. The original tower was used as a lighthouse for the sailors, though also as a belfry (watch tower with storm bell).

Five bells hang in the belfry, each of which had a specific purpose. The largest of the bells, for example, rang the beginning and end of the working day. The smallest one was rung during the execution of a person sentenced to death.

The tower as we know it today dates back to 1515. Or rather the early 20th century, because in 1902 the tower collapsed during the construction of a lift shaft. Soon afterwards, the tower was completely restored. And fortunately, there is a lift that gets you to the top quickly. Once at the top, you have an amazing view of Venice and the lagoon. The view of the basilica with the five domes is especially beautiful. Another tip: try to be there at the end of the afternoon on a weekday. There are practically no queues for you then! 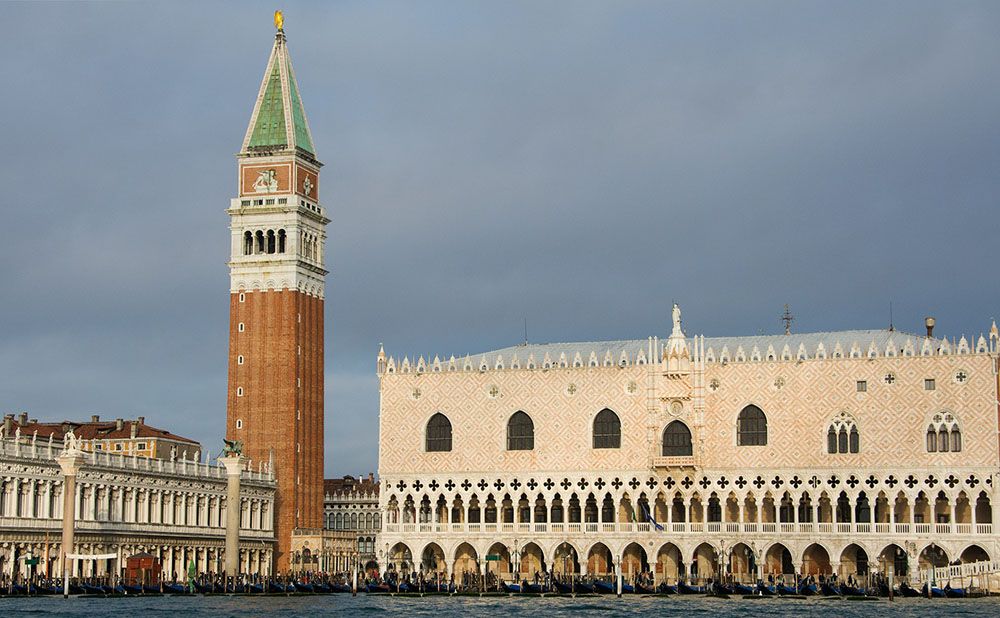 Caught up with the splendour of the basilica and Doge’s Palace? Then don’t forget to walk to the other side of St Mark’s Square. Here you will find the extraordinary “Torre dell’Orologio” [Bell Tower]. It is one of the city’s sights that you shouldn’t miss!

This bell tower from the late 15th century is a true miracle of 15th-century technology. The large clock not only indicates the time, but also the phase of the moon and the sign of the zodiac. Next to the clock are two bronze bell ringers, the ‘Mori’. Every hour during Ascension week, an angel with a trumpet comes to greet the statue of Mary. On Ascension Day itself, the three kings appear.

Inside the tower, the clock mechanism divides the space with living quarters. On a guided tour, you can climb the 19th-century spiral staircase in the tower all the way to the Mori. The bell you hear today is still the original from 1497. 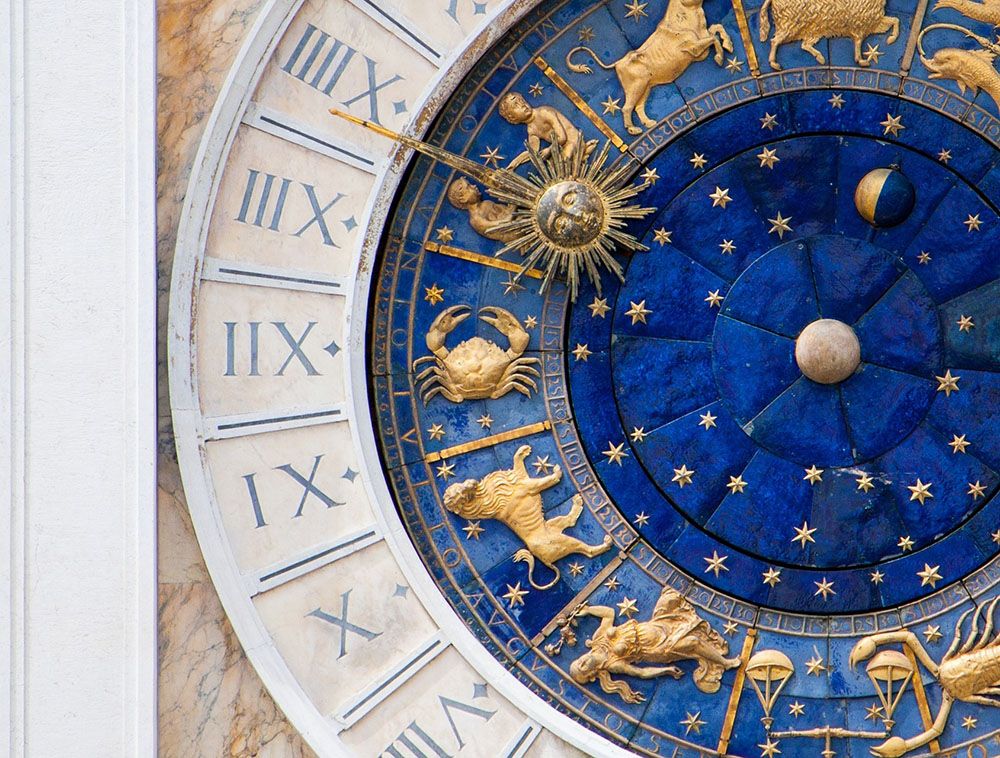 The Museo Correr in St Mark’s Square is one of the most renowned museums in Venice. It houses a collection of paintings, sculptures, antiques, navigational instruments and many other interesting works of art. The museum exhibits cover Venetian culture, history and art up until the unification of Italy in the 19th century. In addition, there are temporary exhibitions of both ancient and modern art, and on current themes.

The admission ticket for the Museo Correr is also valid for the also interesting National Archaeological Museum. This museum contains a wonderful collection of Greek and Roman works of art, some of which date back to the 1st century BC. You will get a glimpse into the life of Italy’s earliest inhabitants. With the ticket you can also visit the Marciana National Library in the square. It is one of the oldest libraries in Italy and certainly interesting to see! 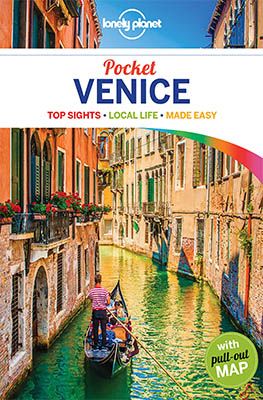 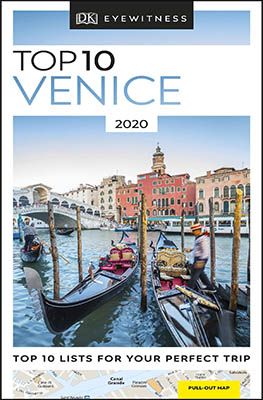