City break in the ancient Roman town of Rimini

City break in the ancient Roman town of Rimini

At the beginning of October last year, we went on a fantastic tour of the beautiful Adriatic coast of north-eastern Italy. With Ravenna as our home base, we visited beautiful cities in the area, including Rimini. We only knew the city as a fashionable seaside resort but during our trip, we got to know a different, beautiful and pleasant Rimini. In the main, a city with wonderful historical sights, beautiful parks, charming squares and interesting museums.

The region of Rimini once played a prominent role in the Roman Empire. The city was founded in 268 B.C. as a crucial outpost on the Adriatic Sea. In the Middle Ages, the city repeatedly fell into the hands of foreign powers. This changed in the 13th century when the Malatesta family ruled the city for centuries. During the Second World War, Rimini was heavily bombed. Fortunately, the remains of the Roman and later mighty medieval city can still be admired today. In this blog, we describe some of the sights you simply must see.

Our visit to the ancient Roman town of Rimini

Prior to our day trip, we could not find a suitable city tour on the internet. So we drove from Ravenna to this ancient city at random. Fortunately, we can easily park our car in the large parking Parcheggio Tiberio. We are lucky: the car park is next to the most beautiful viewpoint of the city! From here, we can see the Tiberius Bridge on the other side of a small pond. The bridge dates back to the beginning of the 1st century and is the oldest bridge in Italy.

Our first impression is that of a pleasant park to relax in. We see some couples sitting on the grass, enjoying the sunshine. Still others are walking along the waterfront and are having a spirited but unintelligible discussion. We also see cyclists riding along the cycle path along the Marecchia river towards the sea. It is incredibly quiet, we notice. Except for the hikers who are enthusiastically discussing something in Italian.

From the park, we cross the Piazza sull’acqua in the direction of the bridge. We stop several times to take a picture. What a sight the bridge with the reflection in the water is! There is good reason why the Tiberius Bridge is used as a backdrop for concerts and theatre performances.

The Roman emperor Augustus started building the bridge early in the 1st century. His successor, Emperor Tiberius, completed the project seven years later. He had the bridge, built of Istrian marble, named after himself. The national monument is a typical example of the technical ingenuity of the Romans. Thanks to this ingenuity, the Tiberius Bridge has been used by pedestrians like us for 20 centuries. 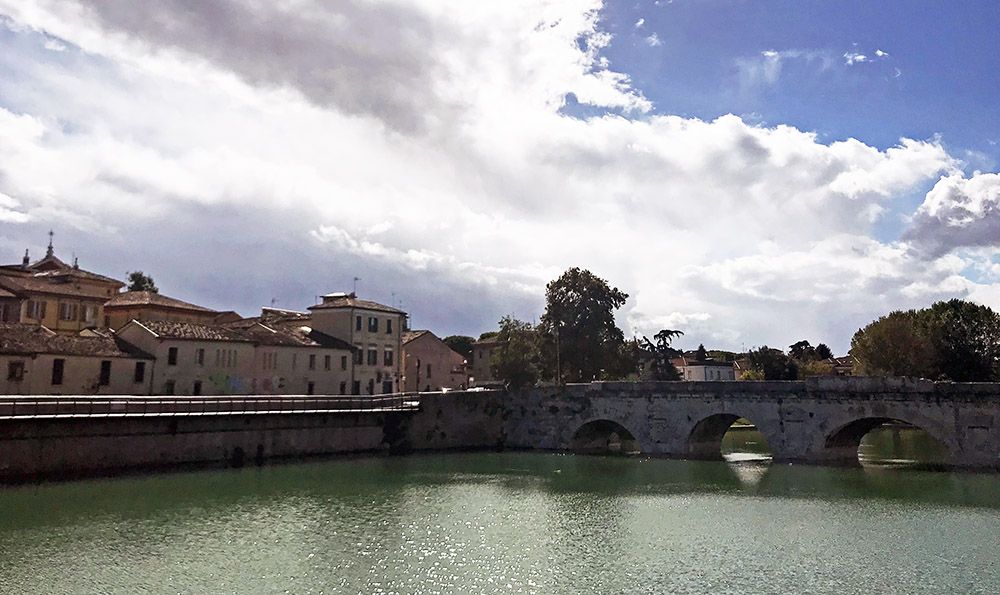 As soon as we cross the bridge we see a sign. It turns out to be a map of the historic centre including the places of interest. That’s handy! We take a picture of it and use it as a route description. Continuing our walk, we pass a small side street with a narrow, old church. We see some people entering or leaving the church. It appears to be the Chiesa dei Servi from the early 12th century. Out of curiosity, we take a look inside. A good thing too, because this church is too beautiful to miss! The frescos and the gilded ornaments are especially beautiful.

A little further on, we turn right from Corso d’Augusto onto the large Piazza Cavour. This is the most important square in Rimini, dating back to the 13th century. Besides a fountain and statue, there are many cafés and beautiful, historic buildings. Near the fountain, we stop to take in the mighty Palazzo dell’Arengo. The palace-like building from 1204 was the seat of the People’s Council during the late Middle Ages. The accompanying bell tower from 1296 was originally used as a prison. The palace next door is the Palazzo del Podesta, which used to be the town hall.

We continue our tour counterclockwise and pass by the Galli Theatre. The beautiful neo-classical building dates back to the middle of the 19th century. According to our itinerary, we should continue via Via Massimo d’Azeglio to Piazza Malatesta. But once we reach the ancient cathedral of Santa Colomba, the road is blocked. Even for pedestrians. So we walk back to the square and under a sort of gatehouse. In the middle of the 18th century, this was the fish market. Nowadays, it is a place where you can buy beautiful jewellery, among other things. At the end of the afternoon, the market turns into a pleasant meeting place. 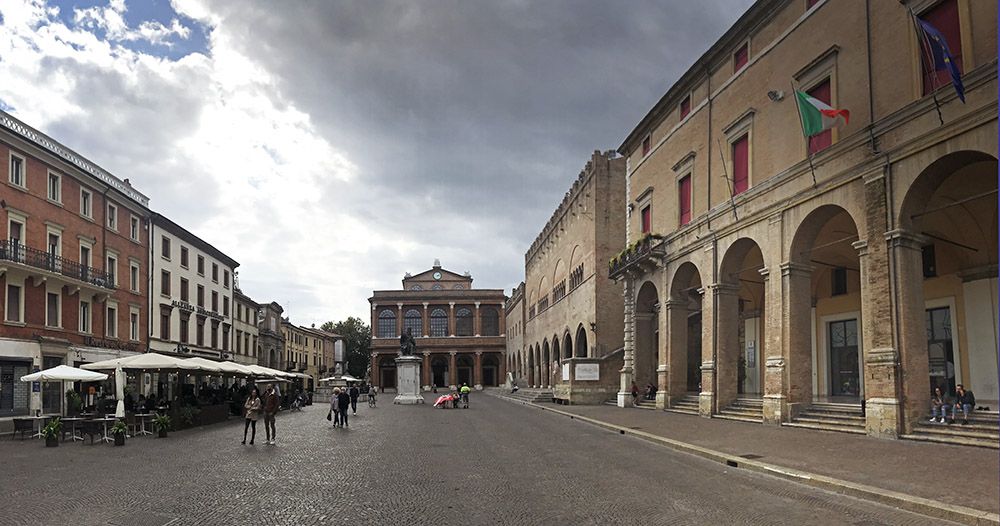 We walk through narrow streets with charming little restaurants to the Piazza Malatesta. Here we more or less bump into the Castel Sismondo. This mid-15th-century castle was the private residence of Sigismondo Malatesta. We find it a rather pompous structure with those immense towers and thick castle walls.

The large complex was converted into barracks in the early 19th century. Five years later, the outer walls were demolished and the moat filled in. Today, it houses cultural exhibitions. We take a walk around the castle, but cannot go inside due to the coronation measures. We can well imagine that Sigismondo Malatesta used to make a big impression with the castle.

The castle also houses the Fellini museum. The museum shows the life and work of the 1920-born director Fellini. Not only his earlier (master) works. The unfinished projects from the last period of his life are also on display. Unfortunately, we lack the time to take a look. 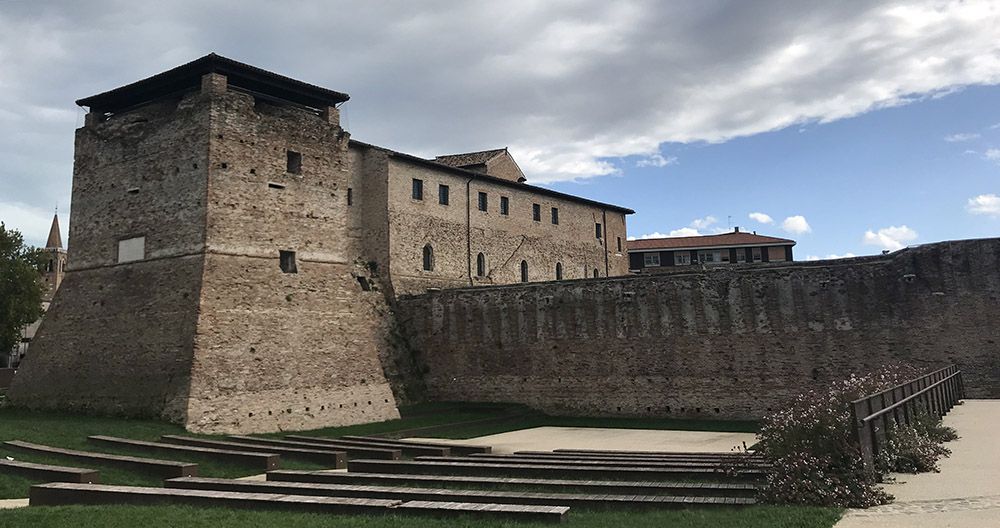 Via some wanderings through the old centre, we finally reach the ‘Arch of Augustus’. Besides the Tiberius Bridge, it is one of the most famous sights in Rimini. The monument, dating from 27 B.C., was built to honour Emperor Augustus for bringing peace. This oldest existing Roman arch of honour stood at the junction of two important Roman roads.

What strikes us is the enormous size. Not only the height but especially the width. There were no doors. One suspects that this was symbolic, namely to indicate that Rimini needed no defence. From a distance the building does not seem very interesting, except for its size. But when we come closer, the detailed reliefs catch our eye. We also notice the battlements. These were only added in the 10th century. Of course, there used to be ramparts too, but they were unfortunately demolished by Mussolini. The Arch of Augustus is depicted as an icon of the city on the coat of arms of Rimini. 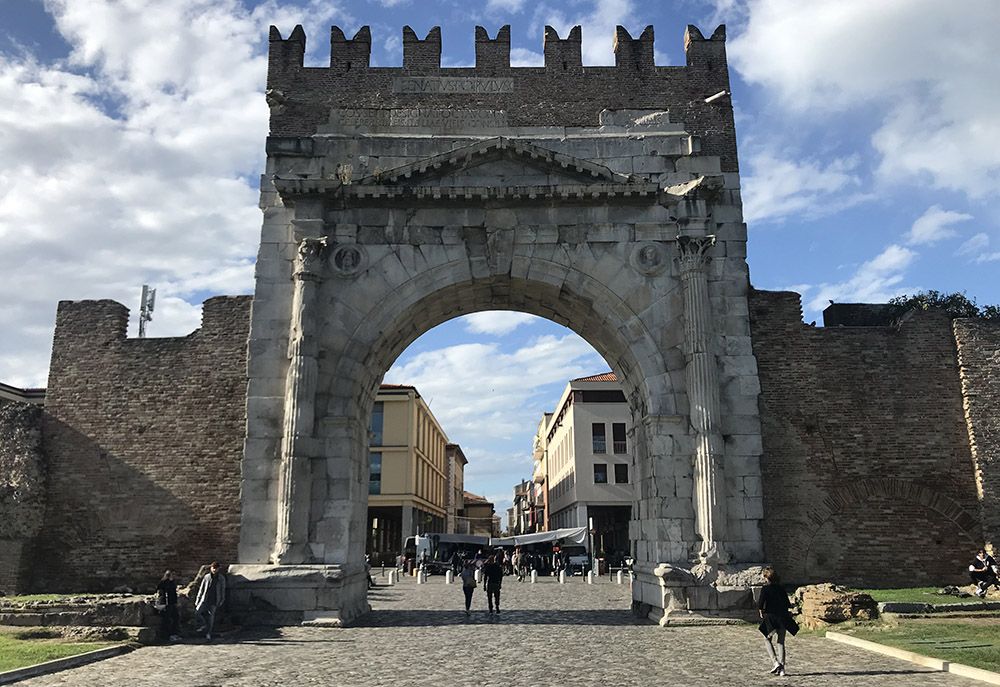 At the beginning of our city walk, we chose the medieval route. But on the map we also see a Roman amphitheatre. We decide to deviate from the route. Via the beautiful Parco Alcide Cervi, we walk to the amphitheatre. This 2nd-century building rivalled the Colosseum in Rome in size. Unfortunately, the theatre already fell into disrepair in the 3rd century. In the Middle Ages, the place where 25,000 people once gathered for entertainment was a huge forest. It was not until the last century that the amphitheatre was restored to its former glory. Nowadays, classical music concerts are held there. We walk around it and try to imagine how it used to be. 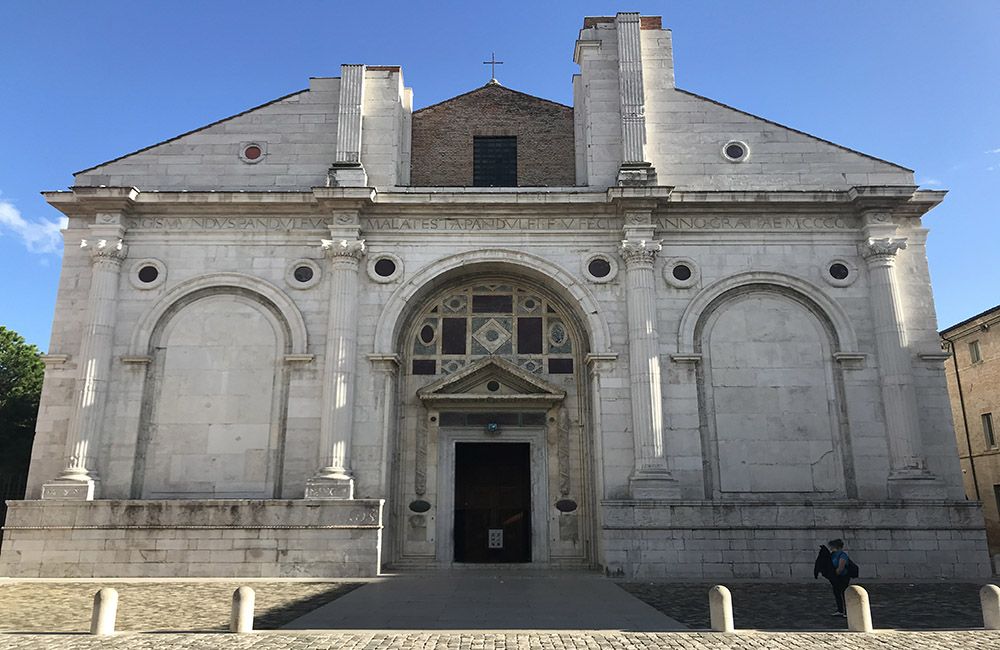 End of the city walk

On the way back to our car we pass many other interesting sights. One of them is Tempio Malatestiano, a tomb for Sigismondo Malatesta and his mistress Isotta. After several other churches, we pass the Domus del Chirurgo, the house of the surgeon. This Roman house from the 2nd century is a particularly interesting archaeological site. Besides many mosaics, a complete set of surgical instruments from Roman times was found. Definitely worth a visit!

The last part of our city walk takes us past the city museum, located in the former Jesuit monastery. The museum was unfortunately closed then. Via narrow, typically Italian alleys, we walk back in the direction of the Tiberius Bridge. Before we go to the car, we walk back to the park where we started the city walk. The view of the bridge and the city is even more beautiful now with the sun low in the sky! We really enjoyed the city. As we certainly haven’t seen all the sights, we resolve to return one day. 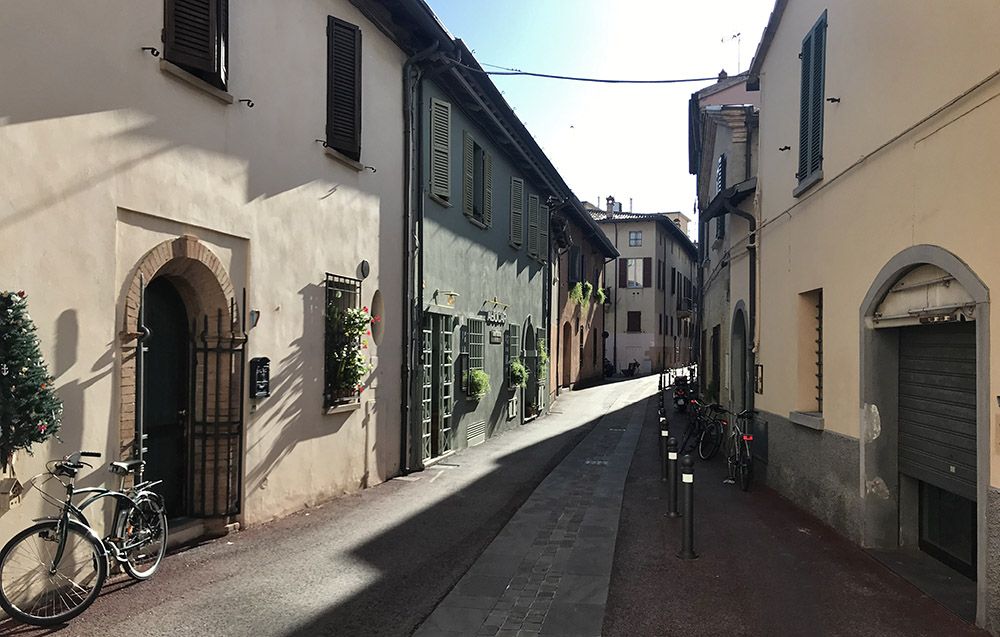 Rimini is one of the most famous seaside resorts in Italy. The city owes this image to La Marina: the 15-kilometres-long sandy beach. Though also thanks to the wide range of accommodation and cosy bars and restaurants. La Marina is popular with Italians from all over the country for a reason. They come here to enjoy the sun and the wonderfully warm Adriatic Sea and to completely relax after work, or during the weekend or holidays.

The beach stretches for kilometres from the Parco Federico Fellini. The beach is lined with first-class hotels, nice beach bars, restaurants and plenty of sun loungers. In high summer, it can be very crowded here. And in our opinion, a little too much noise. If you prefer peace and quiet, head for Parco Murri. The sea is warm and sheltered. 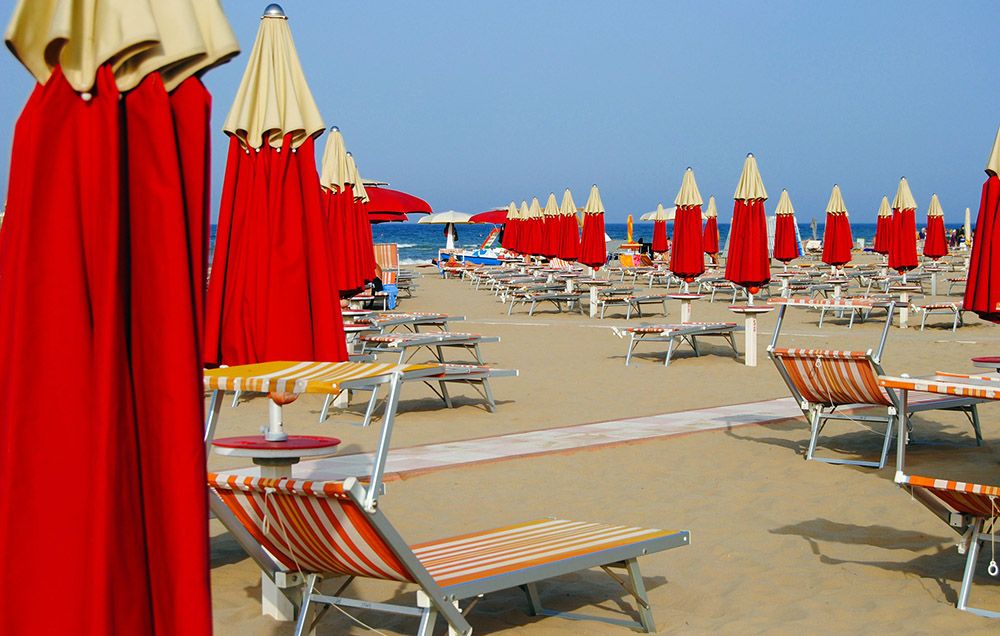 How to get to and around Rimini?

There is an international airport at Rimini, but no direct flights from our country. It is better to take the train or a (rented) car. If you want to fly, then the best option is non-stop to Bologna. From Bologna you take the train or a rental car to Rimini. There is ample parking space if you come by car.

The old town is compact and easy to explore on foot. But the city itself is large. If you want to go to the beach, go by car or public transport. If you stay near the beach, a bicycle is a perfect option. At the Marina, there are several bicycle rental companies. One that is highly regarded is Bike Tour Rimini.

What is the best time to visit Rimini?

The best time to visit Rimini is from May to September. In those months there is the least precipitation. Early October we found it cold on the beach, despite the beautiful, sunny weather. For more peace and quiet you go in the months of June or September.

What are some good accommodations in Rimini?

The old town of Rimini is actually just not to be seen in just one day. In that respect, the city lends itself perfectly to a city trip of several days. Fortunately, there is plenty of accommodation in Rimini. Most accommodation is located at or very near the beach.

What are nice and good places to eat and drink in Rimini?

In Rimini you can find several good eating-places. Not only in the old town, but also at the coast. Because of the location directly at the sea, fish dishes are usually very tasty. Usually, you will also be served piadina with each dish. Piadina is a thin and delicious bread from the Emilia-Romagna region. We have already praised this bread in our blog about Ravenna.

The restaurants in the real tourist places are often not of the highest quality. Fortunately, Rimini is an exception: there are also many good, inexpensive restaurants right at the beach. We heard good stories from the locals about Beach Cafe Rimini, among others. Another, atmospheric beach restaurant with good food is Piadineria Bar Rondine dalla Meris. By the way, at the Marina you should go to Restaurant Prua Rimini. Really delicious food!

In the historic centre of Rimini you will find many cosy terraces and eateries. However, our experience is that not all of them serve equally good food. The general tip is to be guided by how busy it is at a restaurant. The busier it is (especially with locals, as far as you can judge) the better the cuisine. 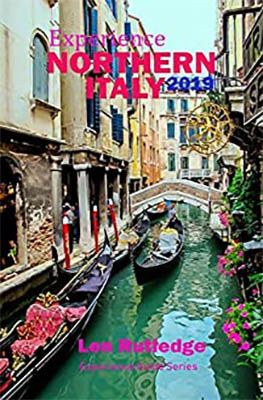 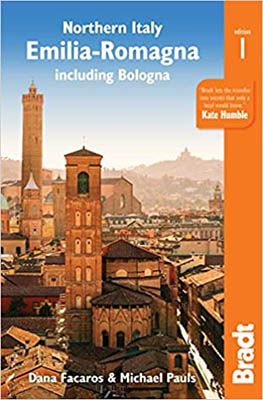