Hiking in the Jura Mountains, the “pure France”

Hiking in the Jura Mountains, the “pure France”

Home » France » Hiking in the Jura Mountains, the “pure France”

At the end of June, we visited the Jura at the invitation of Bourgogne-Franche-Comté Tourisme. This region in eastern France was still unknown to us at that point. The purpose of our visit was to get to know “pure France”. And, of course, to see whether the Jura has enough to offer the over-50s. In this blog, we will explain why the answer to that question is a resounding “yes”. We saw heaps of beautiful things and did so many nice, active activities. So much so that we would happily return today not even waiting until tomorrow! 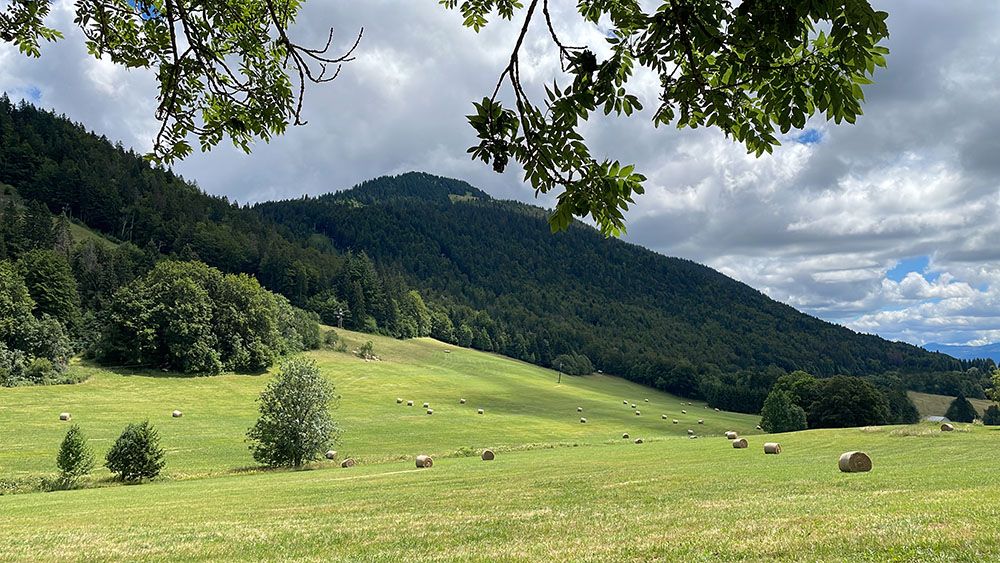 Hiking in the Jura Mountains

The Jura is not the busiest region in France yet the area is a particularly interesting travel destination for active nature lovers. The Jura is even very popular among avid hikers because of its absolutely stunning, unspoiled natural landscape. Think mountains with the most beautiful views, peaceful mountain meadows, waterfalls, large forests, ravines and beautiful lakes.

The hiking possibilities in the Jura are endless: in total, the hiking network covers no fewer than 5,300 kilometres of marked trails! So, you won’t get bored easily. There are many short and longer day trips but also fantastic multi-day hikes. And depending on how many metres’ altitude you want to get to, you can go into the mountains of the Pays de Gex or into the valleys. Something for everyone, really. 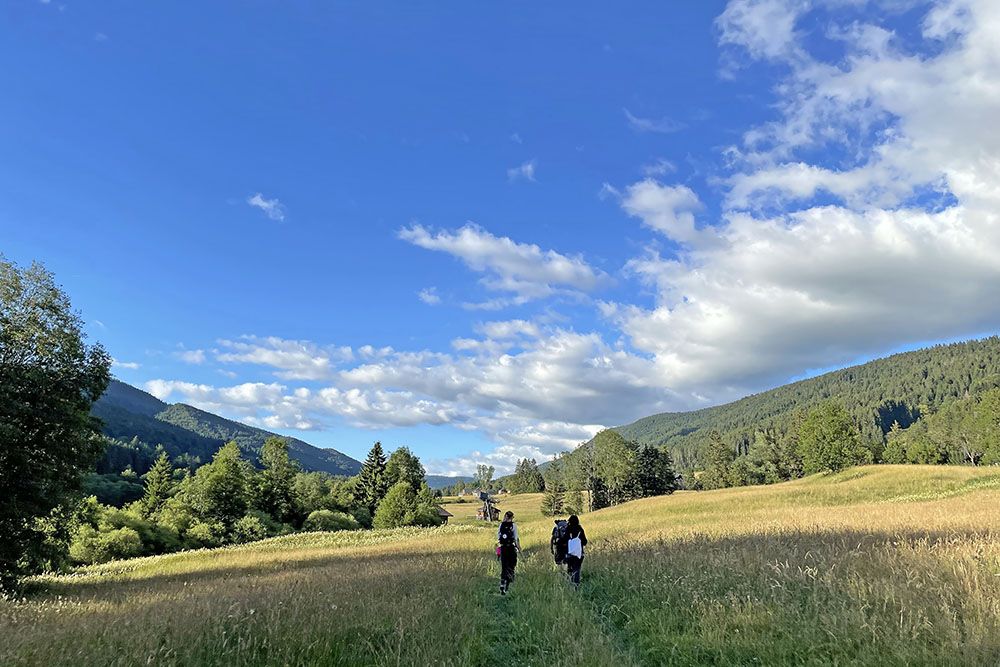 During our stay in this rustic part of eastern France, we did several beautiful mini hikes. One of them even crossed the border with Switzerland: the climb of the 1,677-metre-high Dôle. But maybe the most special hike we did was the one where we went out walking the dogs. This walk does not follow an official route and is not signposted either. In our miniblog that we are going to publish on short notice, you will find the GPX and practical information if you want to do the same hike.

In the Jura, there are thousands of fantastic short walks, each one more beautiful than the next. Unfortunately, we have done too few of them ourselves. Therefore, we asked Bourgogne-Franche-Comté Tourisme for advice. They got back to us with seven totally different routes. You can find them on this page, including practical information. 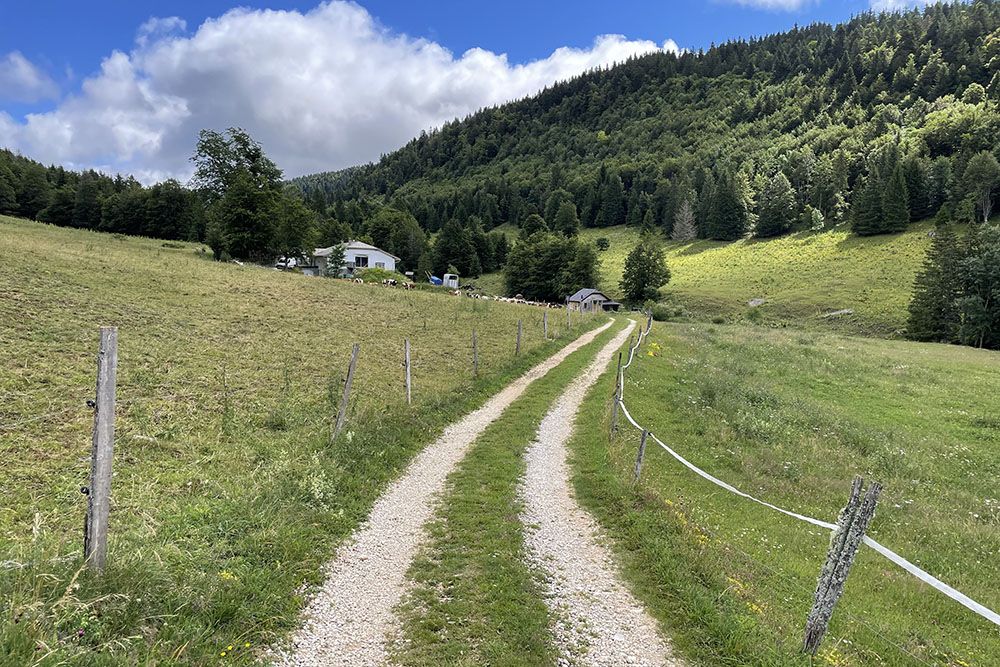 The long-distance hiking routes through the Jura Mountains

The GR5 is a popular route of over 2,100 kilometres from Hook of Holland to Nice. The part of the GR5 that runs through the Jura is also called the “Grande Traversée du Jura” (GTJ). The route of 400 kilometres goes from Mandeure in the north to Culoz in the south. It takes you through two totally different landscapes: the deeply carved valley of the Doubs in the north, and the peaks of the highest mountain ridges in the south. Is 400 kilometres on a hiking holiday too much for you? No problem: on the GTJ website you find various detailed ideas for shorter, multi-day hikes. 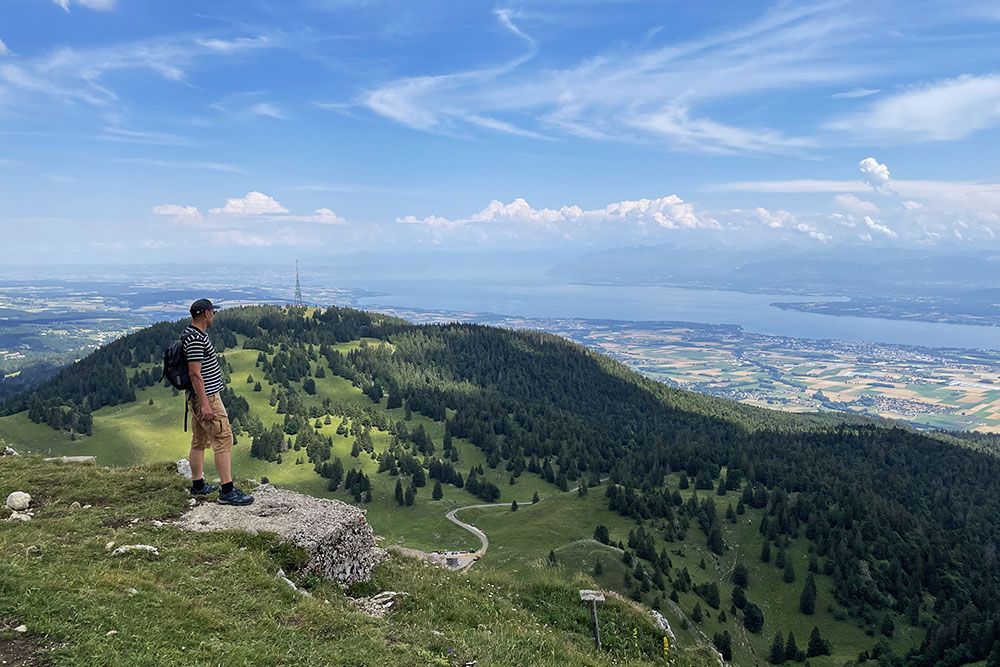 Along the various routes you do find plenty of accommodation, ranging from gites and chalets to holiday parks and (small-scale) hotels. If you plan to hike the GR5 (GTJ), use the ideal accommodation finder from the informative website of the GTJ. Information about the GR9 took us a bit more effort to find but we found a proposal of stages including an overview of accommodations on this website.

If you want to hike many stages, you probably don’t want to drag your luggage along all the time. In the Jura, luggage transport is possible in many cases! This is often done by the accommodation where you just spent the night or where you are going to stay the next night. The accommodation providers that offer this service can be recognised by the suitcase icon in this guide under “Accommodation and Practical Information“. 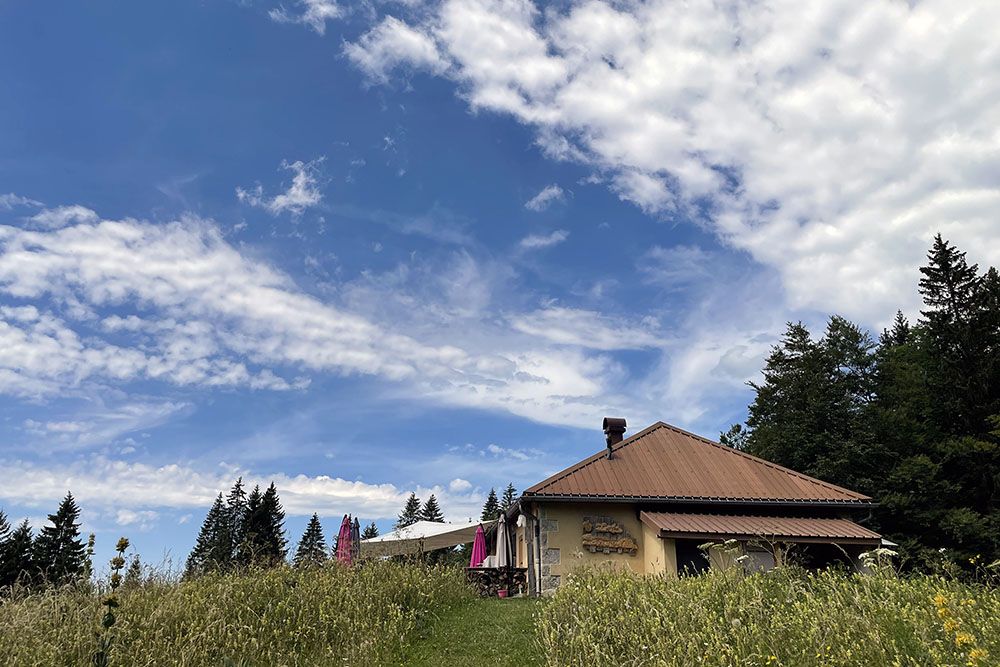 Other activities in the pure nature of the Jura Mountains

Besides hiking, the Jura lends itself perfectly to other sporting activities, such as cycling. The big advantage of the Jura for cycling is that the area is so wonderfully quiet. You share the usually well-maintained roads with motorised traffic. However, because it is so quiet, this does not really bother you.

Except for the Haute-Jura, the area for cyclists is a bit like the Ardennes. Only the hills are a bit higher so the climbs are sometimes more strenuous. For cyclists there is enough challenge in the Jura. But recreational cyclists can also enjoy themselves. Even with an electric bicycle! There are 26 routes from 15 to 50 kilometres especially for eBikers. Ideal because there are plenty of locations along the routes to recharge your battery. There are also 2,000 kilometres of marked cycle routes in the Jura. And for mountain bikers there are almost 140 mountain bike routes totalling 2,000 kilometres. Finally, for both (recreational) cyclists and mountain bikers there is the Grande Traversée du Jura (GTJ).

Other activities in the Jura include horseback riding, fishing and mountain scootering (a kind of cross between a scooter and an electric mountain bike). We did the latter in Les Rousses. The trip goes through the woods near Les Rousses and along a very large, historic fortress. A very nice time! You can also experience a biathlon in the Les Tuffes stadium. Here you can cross-country ski (with wheels) and/or shoot on the shooting range. Fantastic stuff! 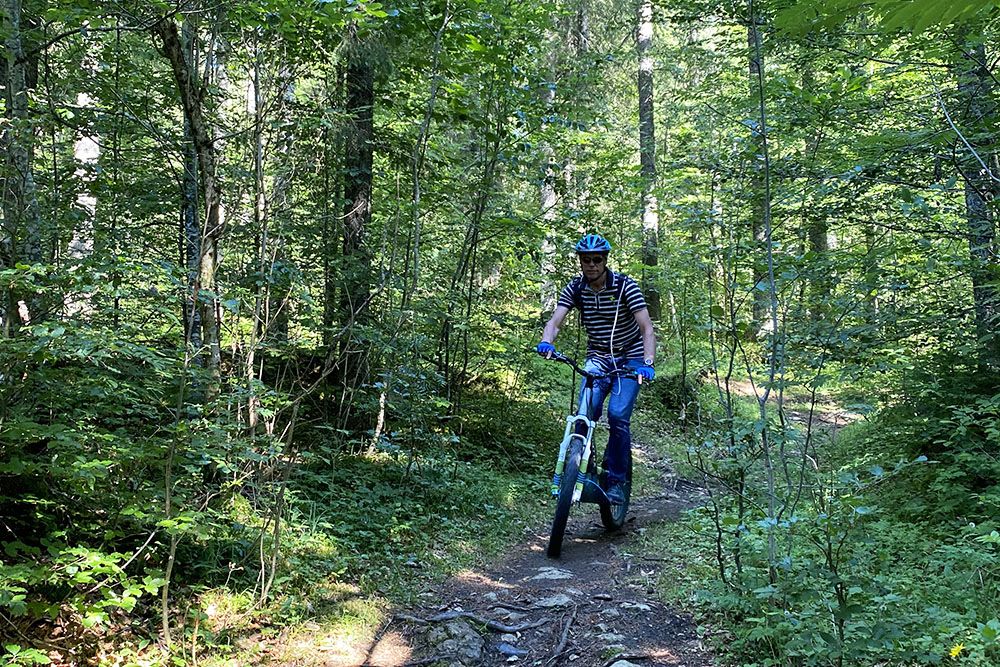 Due to its limited altitude (peaks of around 1,700 metres) the Jura is not nearly as well known as the Alps as a winter sports destination. Still, you can have an incredible holiday in the snow here. The area is almost snow-certain due to the (very) low temperatures and the large chance of precipitation in the winter. Most winter sports enthusiasts go cross-country skiing here, but there are also more than 50 kilometres of ski slopes. Besides cross-country skiing and snowshoeing, you can even go dog sledding. In that sense, the region is not inferior to destinations such as Lapland! We will have a special blog on winter sports in the Jura later. 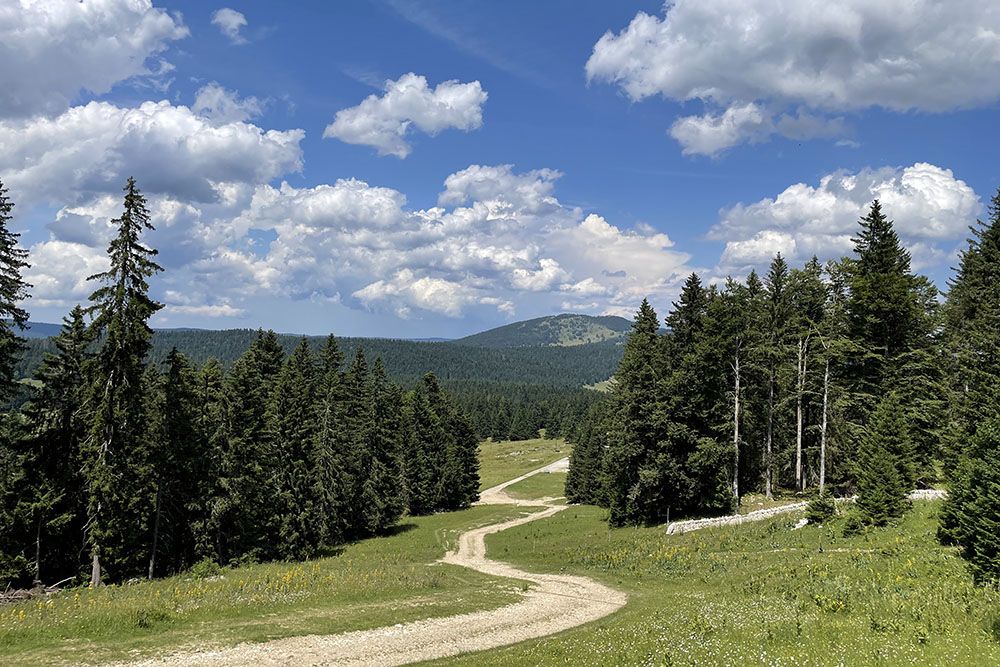 Answers to frequently asked questions about hiking in the Jura Mountains

Where are the Jura Mountains?

The ancient mountain region of Jura lies on both sides of the French-Swiss border, roughly at Geneva and north of it. The French part of the Jura region stretches from Dole in the north to Belley in the south.

How do I get to the Jura Mountains?

There are many transport options to the French Jura. We went there by train, which we liked very much. It is not a cheap option but it is reasonably quick. You get there by first taking the train to Paris (Gare du Nord). Then you take the Paris metro two stops further to Gare du Lyon. Here you can take the TGV towards Lyon or Geneva.

If you want to go by plane, then both Lyon and Geneva are a good option. However, most people go by car. You are then much more flexible to go wherever you want. This is especially nice if you prefer sightseeing with occasional (short) day hikes. But also, if you plan to cycle in the Jura Mountains with your own bike. Taking your bike on the Paris metro (or TGV) is hardly an option.

How do I get around the Jura Mountains?

Many active nature lovers who travel through the Jura Mountains do so on foot (GTJ) or by bicycle. In addition, some water enthusiasts use a rental boat to admire the area from the Doubs. Other transport options include public transport and the car.

Public transport is well organised in the Jura Mountains. The railway network of the TER Bourgogne-Franche-Comté connects even the smaller towns. There is also a dense network of bus lines. However, please note that you cannot always rely on public transport in France due to strikes. A private car (or rental car) is the most comfortable way to travel within the region.

What is the best period to visit the Jura Mountains?

The Jura Mountains are characterised by significant differences in altitude, and therefore in temperature. High up in the mountains it can freeze very hard in winter. But even in summer, it is a good idea to pack a windbreaker in your rucksack. The best time to travel for an active holiday is from May to September. For cross-country skiing, January and February are the best months. In every month of the year, expect a lot of precipitation. The chances of this are lowest in the summer months of July and August.

Where is the best place to stay in the Jura Mountains?

The answer to this question depends mainly on your main activity during your holiday. If you are here mainly for walking, then use this guide to accommodation.

In the Jura Mountains, there is a label for accommodation with special services for recreational cyclists. If you are planning a cycling holiday for several days in this region, look for accommodation that has this label. The big advantage of this kind of accommodation is that they have, for example, a secure bicycle shed. But they also have the means to do any repairs to your bike. And you can do your laundry there.

If you come here to cycle, you will probably want a permanent 'home base'. Think for example of the beautiful Oyonnax situated near lakes. Or Bourg-en-Bresse, through which a stage of the Tour de France passed in 2016. For the inveterate cyclist, the area around Culoz or Artemare is also suitable. In 2017, this was a stage of the Tour because of the Col du Grand Colombier. The ascent of this col is often considered one of the toughest climbs in France. Other suggestions for nice accommodations are La Mainaz and Le Manoir des Montagnes, both close to Les Rousses.

What is the culinary reputation of the Jura Mountains?

The Jura Mountains are best known for its cheeses. One of the most important cheeses is Comté: a hard cheese, somewhat reminiscent of Gruyère, but creamier. It is the most produced cheese in France. Another cheese is Mont d'Or or Vacherin: a soft cheese that is eaten as a kind of cheese fondue. You dip your boiled potatoes in it. There is also the Bleu de Gex: a delicious blue cheese that we got to know during our visit to a "fruitière" (cooperative cheese dairy).

Besides delicious cheeses, the area is known for its Saucisse de Morteau, a smoked pork sausage. And for its trout. You can catch this fish yourself in one of the many rivers in the area but you will also find it on almost every menu, often in combination with Comté cheese. 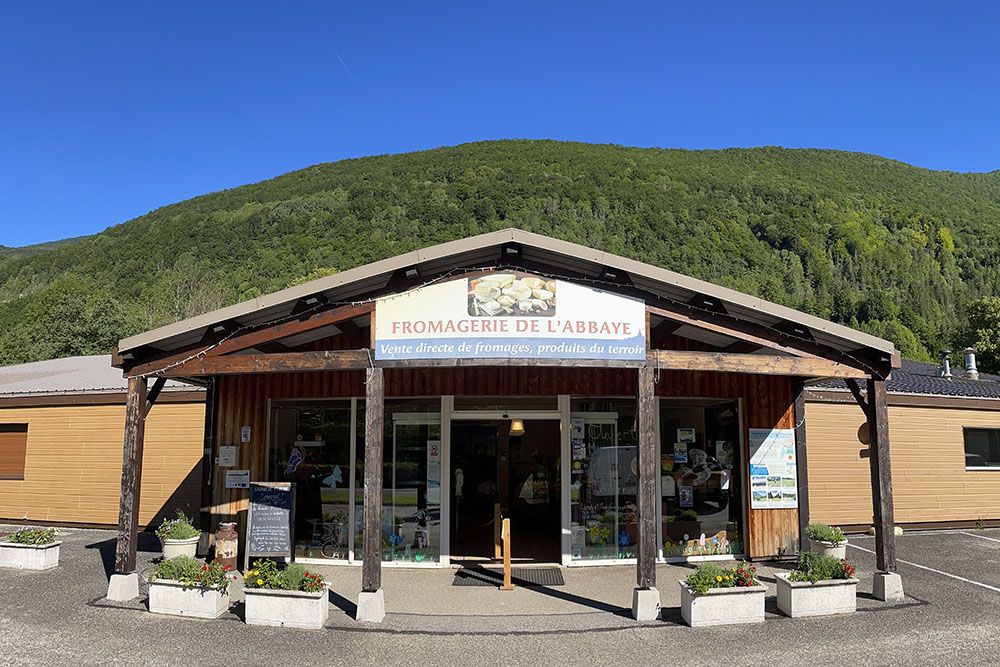 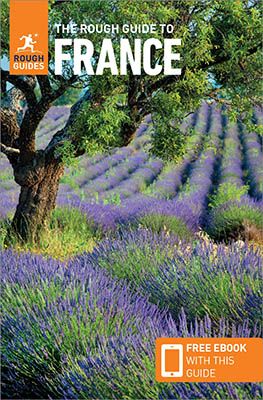 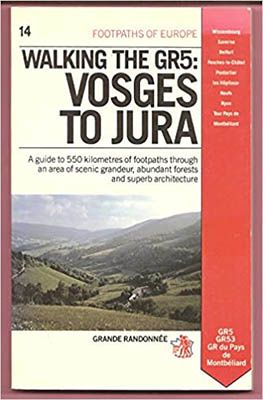 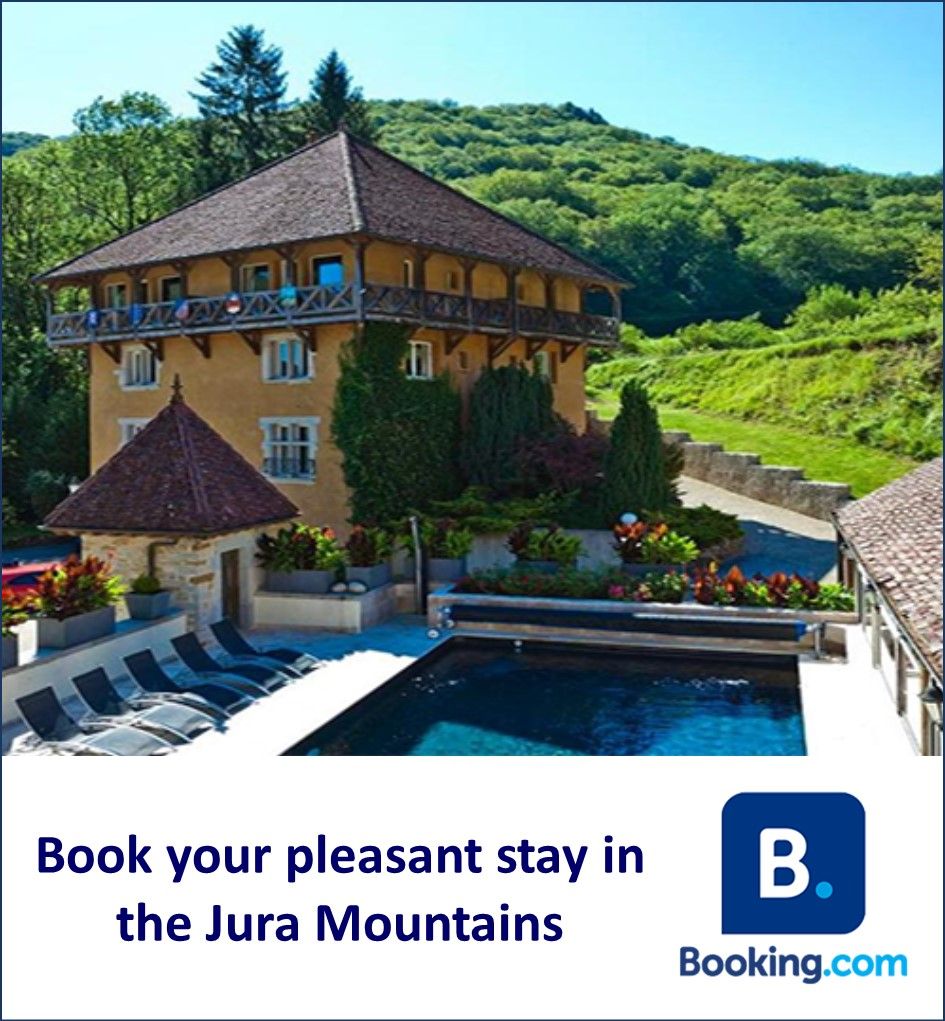