Sicily is a rugged, beautiful and huge island south of the ‘boot’ of Italy. The island has a long, particularly rich history of foreign domination by the Greeks, Romans, Arabs, Normans and Aragonese. As a result, Sicily offers great cultural diversity.

The island is also one of the most important wine regions of Italy in volume. Wine has been cultivated since the Greek colonisation in the 8th century BC. A remarkable detail is that the alcohol consumption among the population is said to be one of the lowest in Europe.

We visited Sicily to celebrate New Year’s Eve and to climb Mount Etna, the highest active volcano in Europe with a height of 3340 metres. 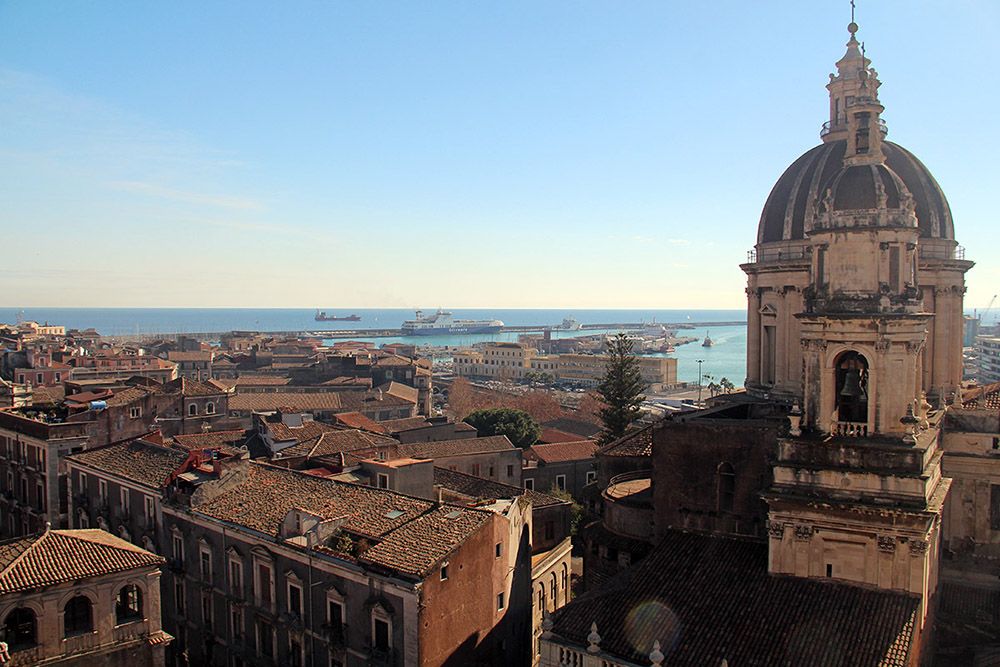 Apart from the Stromboli, Mount Etna is the most active volcano in Europe and one of the most active in the world. Captured eruptions go back to 1500 BC. With the great eruption in 1669, in which many villages and part of Catania were destroyed, about 25,000 people died. Since then there have been regular eruptions, such as in 2001 when many buildings and the cable car were destroyed.

Less than five days before we left for the island, Mount Etna erupted again at one of the five main craters at an altitude of 3300 metres. A few days later, an earthquake measuring 4.8 on the Richter scale followed by a thousand aftershocks. Many buildings in the area were damaged. As a result, 28 people were injured and 400 homeless. It was precisely this mountain that we climbed!

Since 1987, the volcano and the slopes belong to the Parco dell’Etna national park. Since June 2013, the volcano is also on the UNESCO World Heritage List. The park offers many opportunities for walking or cycling. Thanks to the five ski lifts at altitudes above 1900 metres you can even ski there in winter! 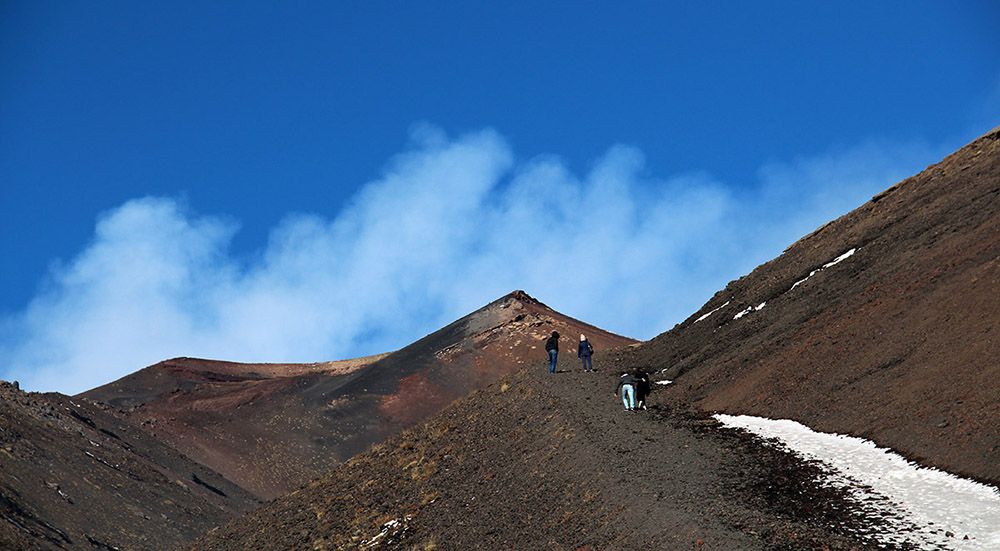 Walking around the craters

The southern slope of Mount Etna is the most accessible for climbing Mount Etna. The starting point for almost all activities is ‘Rifugio Sapienza’ at over 1900 metres’ altitude. There are quite a few parking spaces, souvenir shops, some restaurants and the cable car.
You can go to the end station at over 2500 metres’ altitude on foot or by cable car. Walking takes about four hours one way!

After the end station, it is still more than 200 metres’ climbing for the first of four craters. That seems little but given the thin air most people take two hours to do it! (See also our blog about preventing altitude sickness.) Because of the cold (in winter the temperature drops below freezing) we took an off-road bus. Unfortunately, that bus could not bring us all the way to the last stop, because the crater that was created at Christmas was still smoking quite close by. A guide then led us to some spectacular views.

The very experienced hiker can also enjoy the northern slope of Mount Etna. This slope is significantly quieter than the southern slope and offers unparalleled views. The starting point is the small ski station Piano Provenzana. From there you go with an off-road bus to an altitude of approximately 2900 metres to continue on foot to the craters at approximately 3300 metres altitude. The descent takes you along the spectacular “Valle del Leone” and the volcanological observatory “Pizzi Deneri”. 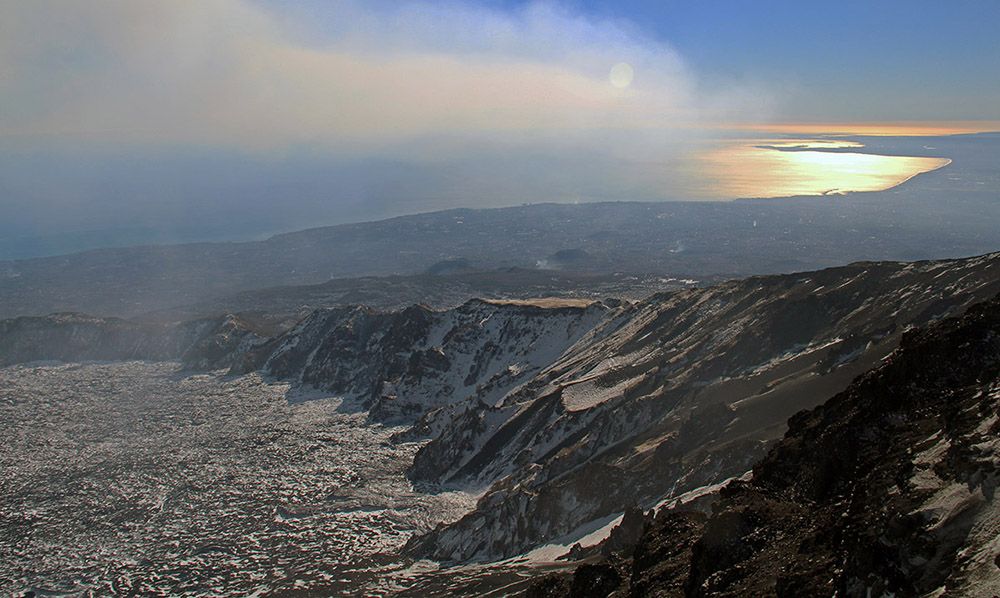 Both Rifugio Sapienza and Piano Provenzana can be reached by (rental) car. In winter you should consider snowfall and therefore smooth, snowy roads. On the way there we took a road off the motorway and got stuck in the snow several times.

Mount Etna can be climbed all year round but during the winter months it can be quite cold. Summer in itself has wonderful temperatures but you have to share the volcano with large crowds. Our advice would therefore be to go up the mountain in May, June or October. To avoid the crowds as much as possible, it is wise to bet at the starting point (Rifugio Sapienza as Piano Provenzana) no later than 9:30 am to park your car. 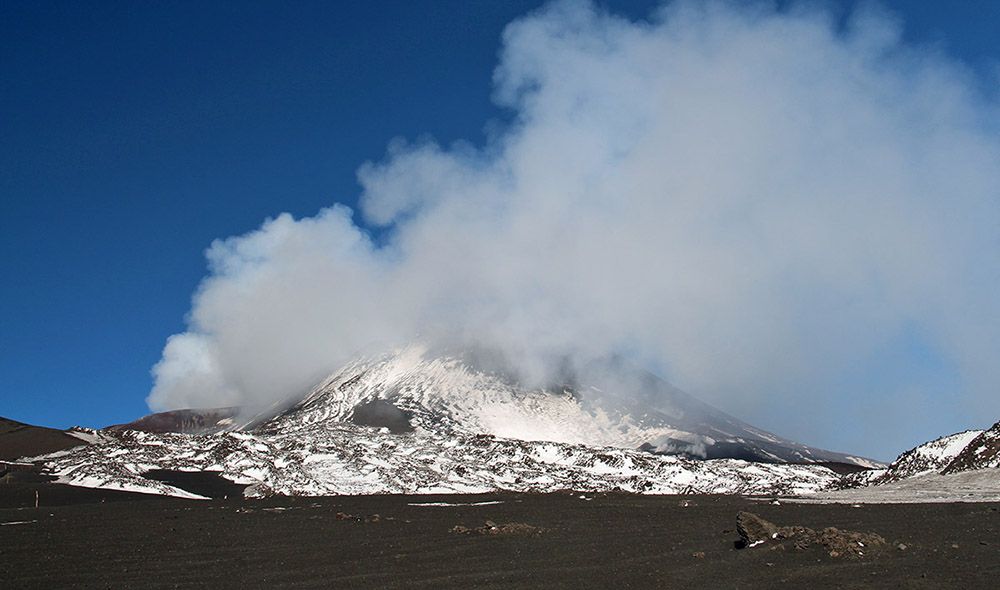 Other attractions on the island

The particularly large island of Sicily has many more fantastic sights apart from Mount Etna. Take, for example, the volcanic Aeolian islands, which have been on the UNESCO World Heritage List since 2000. Or go to Madonie National Park, a nature reserve where you also have many small medieval villages and towns. Thanks to the Greek rule thousands of years ago, you can still find some beautiful Greek temples and ruins on the island, such as Segesta and Selinunte. Besides Catania, where we stayed all this time, we also visited the beautiful, picturesque cities Taormina and Siracusa. 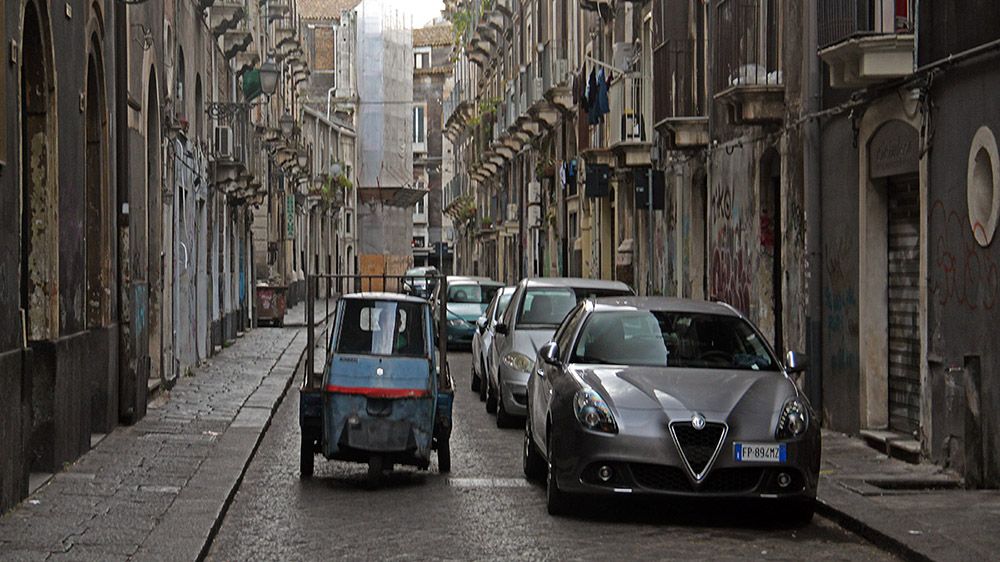 Catania is a large port city located at the foot of Mount Etna in eastern Sicily, with a rich history that goes back 2700 years! When the city was partially destroyed by a major earthquake at the end of the 17th century, the reconstruction provided a special baroque architecture and urban planning. Partly for this reason, the inner city is a world heritage site. Although we enjoyed staying in the cosy, old centre, we find Catania a bit dilapidated and sometimes even dirty. 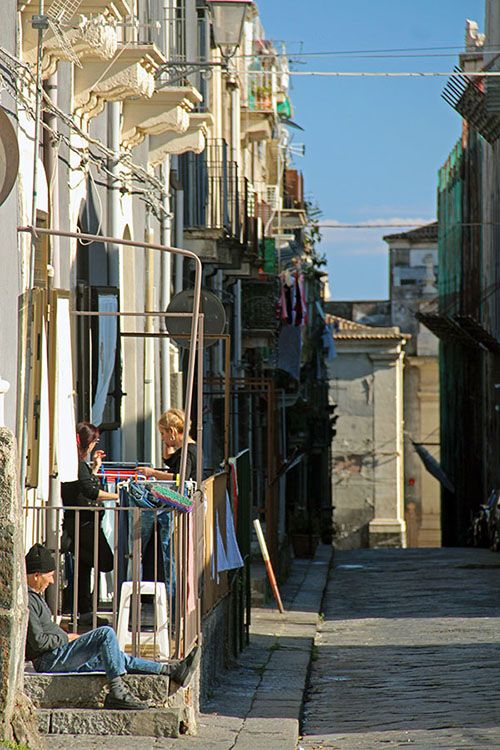 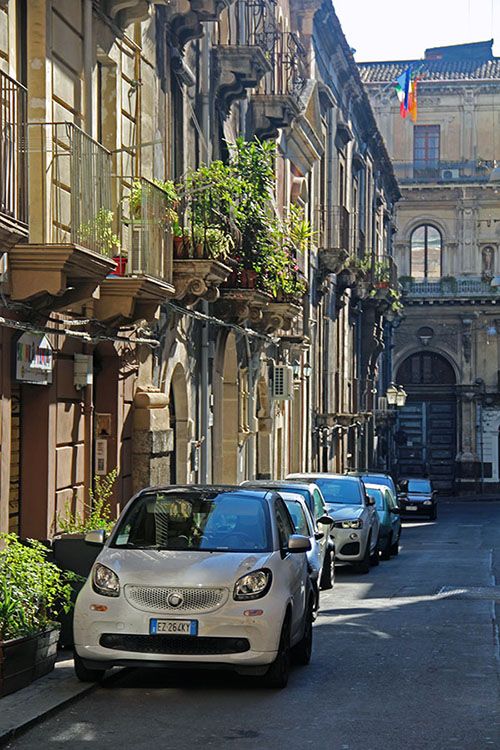 Siracusa (Syracuse) is an old town in the southeast of Sicily, located by the sea. The pleasant city has many famous archaeological sites (including a large Greek theatre) and a beautiful historical centre on the island of Ortygia that is connected with the rest of the city by a wide, short bridge. On this island you can wander for hours through the narrow, idyllic streets and graceful, large squares. There is also an old fortress which was just closed at noon when we were there. 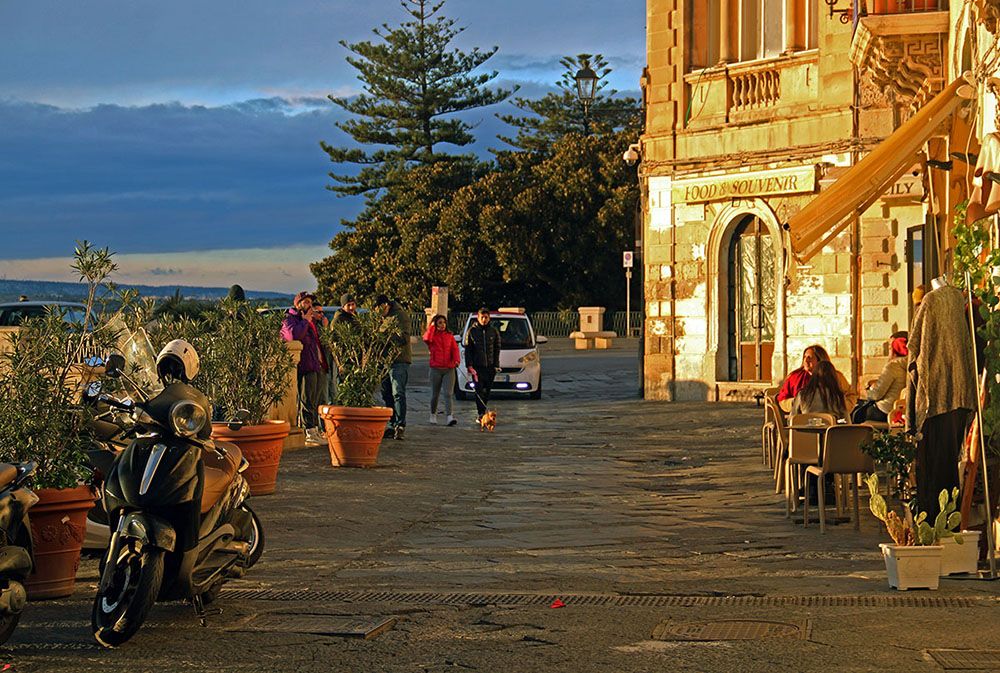 We were very charmed by Taormina, a beautiful old town built against a mountain slope on the east coast of Sicily. The city is one of the most important tourist attractions on the island. Even in the winter when we were there, it was crowded (not too badly). You will find many historical buildings from the time of the Greeks but also the Middle Ages. You can walk for hours through the main street, Corso Umberto, and the beautiful city gardens. Visit the Greek Theatre in any case, which we found to be one of the highlights of the city! By the way, if you go there by car, park just outside the centre. The parking garages have free buses to the city centre.

Practical matters for your visit to Sicily

It can get very hot in the summer. We were there in the winter and had beautiful, sunny but reasonably fresh weather. In that respect autumn, and especially spring, are better seasons to visit Sicily. 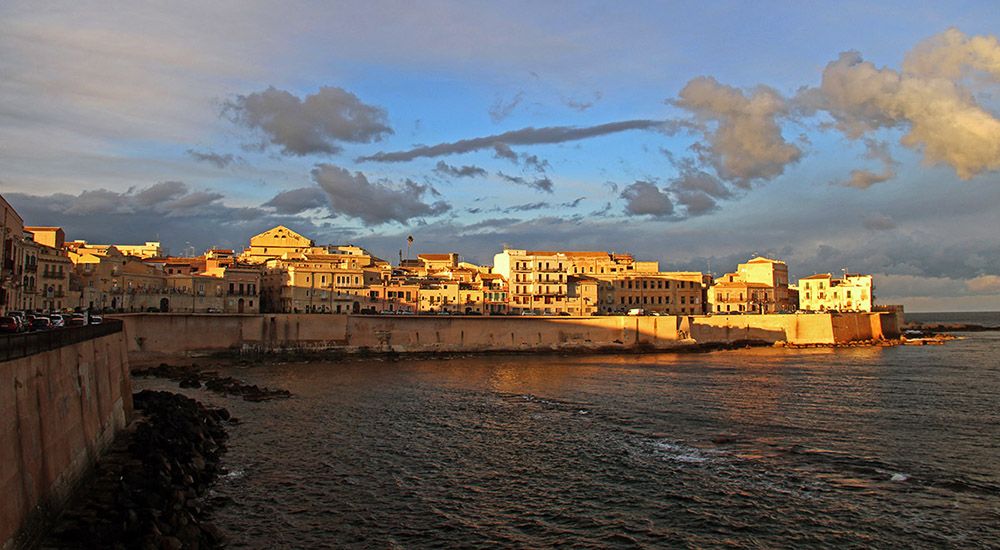 The island has two (international) airports: Palermo and Catania. You can also reach the island by boat. On the island itself you can be transported by buses and trains. Another option is a rental car. The roads are generally good and parking in the smaller cities is often free.

We stayed in a very nice apartment in the middle of the old, cosy centre of Catania, namely the Etn’art Gallery House. It is a large apartment with several rooms and because it is also an art gallery there are beautiful modern artworks on the wall. The owners do their very best to make your stay there as fantastic as possible. Search here for accommodation in Catania, Syracuse or Taormina. 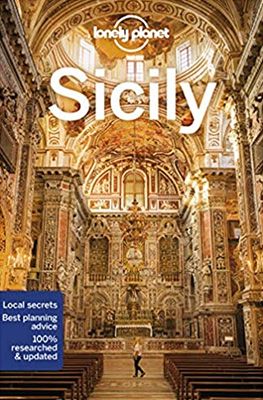 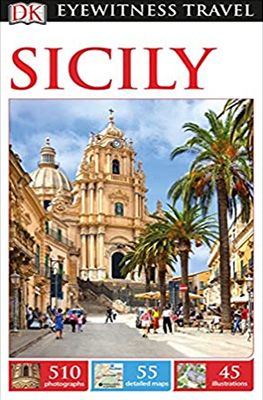