One of the many Spanish cities that we have gone on a wonderful city trip to is the charming old city of Valencia. This is the third largest city in Spain on the Mediterranean coast and in our opinion is really worth a visit! The birthplace of paella is known for the Fallas festival in March and the enormous, neo-futuristic project by the architect Santiago Calatrava.

The Turia River used to flow through the centre of the 2000-year-old city, but was diverted in 1957 after severe flooding. Since then, a beautiful park has been created where you can enjoy yourself nearly every day of the year! 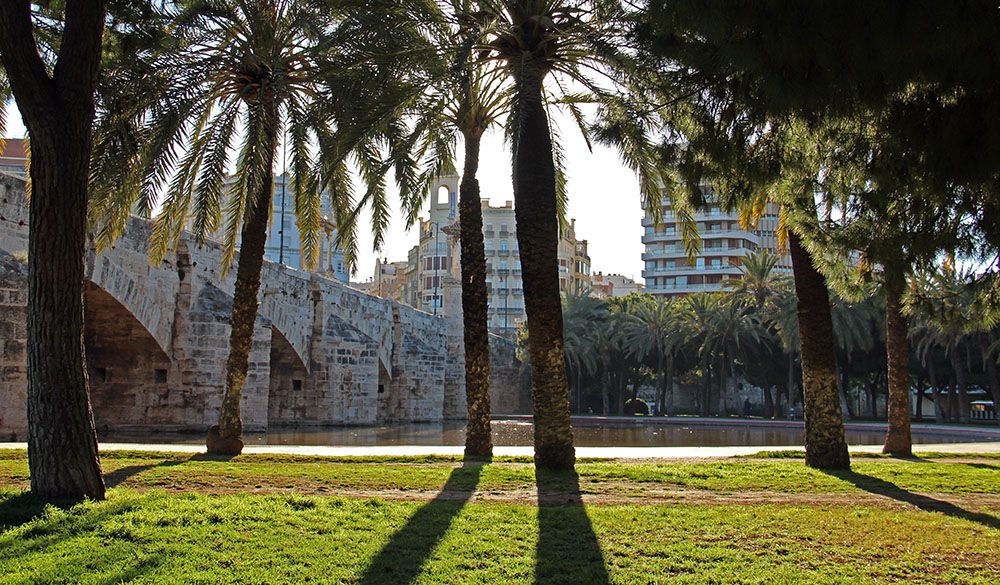 The El Carmen district in the old town

El Carmen is one of the oldest districts in Valencia. Thanks to the many narrow streets and high, beautiful old buildings, it is also one of the most picturesque. In the time of the Moors, the former orchard became an Islamic suburb. A few centuries later, the district became the centre of medieval aristocracy. Many monasteries were built in that period. Nowadays, it is a wonderfully relaxed area where you find many terraces, restaurants and trendy shops. 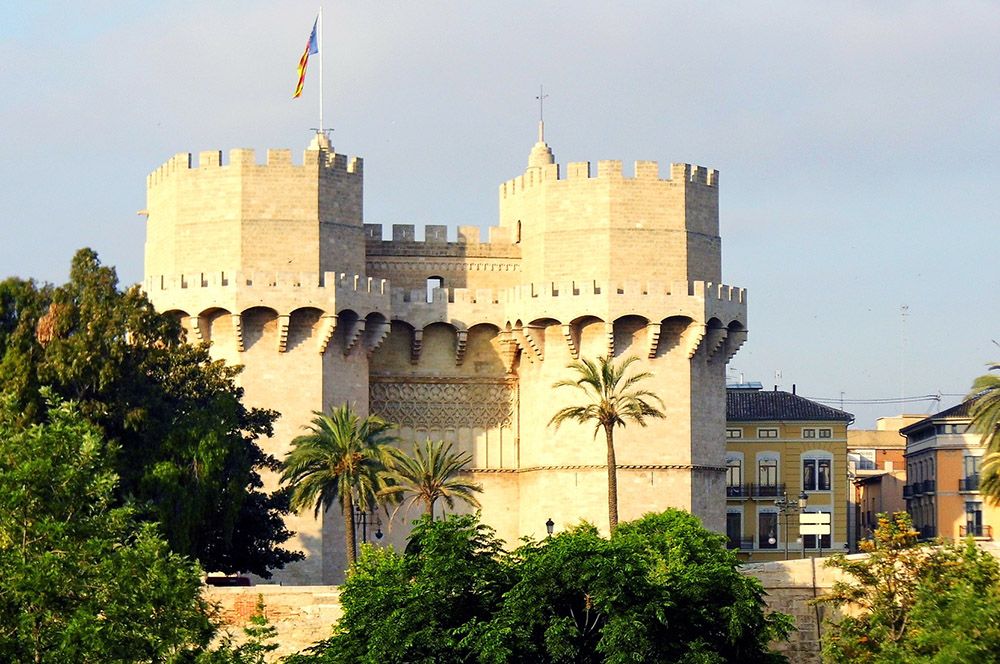 This 15th-century UNESCO monument was the silk fair during the golden age of Valencia. The beautiful building is known by many as “the best preserved late Gothic building in Spain”. In actual fact, due to the many restorative works in the 19th, 20th and 21st centuries, only the interior is still authentic. Nonetheless, this makes a visit to La Lonja de la Seda no less interesting!

At the Plaza del Mercado is the beautiful main entrance of the stock exchange building. Inside, there are two different large rooms: one was formerly the trading hall where merchants (sold) the silk, the other was for the consulate and tribunal. In between is El Torréon, the square tower that served as a chapel and prison for unpaid merchants.

Cathedral of Valencia and the Miguelete tower

The special cathedral of Valencia is also known as the place where the (supposed) holy grail is located. The chalice dates from the 1st century BC. In the 17th century, it broke but was also restored. Meanwhile, the chalice was exhibited in the cathedral. The construction of the cathedral began in the 13th century, which was at the same location as the old Moorish mosque. The building uses Romanesque, Gothic and Baroque styles.

While you are at the cathedral, don’t forget to climb the 50-metre-high octagonal bell tower too, the Miguelete (El Micalet), which dates back to the 14th and 15th century. Admittedly, climbing over 200 steps is quite a challenge for many but the reward is more than special. Once up at the top, you get a truly fantastic view of the city! 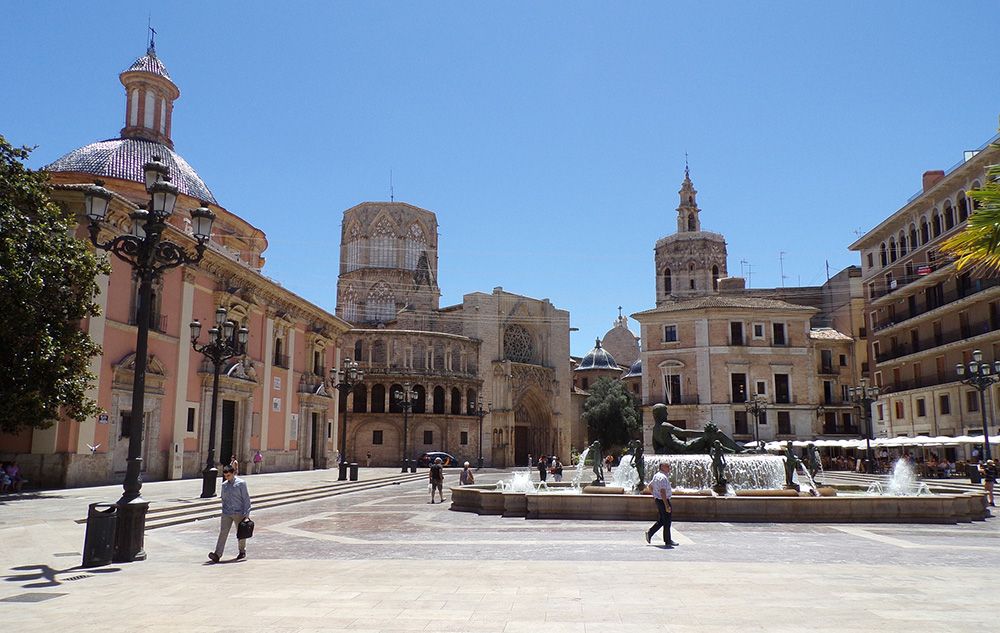 The riverbed of the Turia

In Valencia there are many well maintained parks, including the botanical garden and the ‘Jardines del Real’. But the park that impressed us the most is without a doubt the Turia (Jardín del Turia).

As mentioned before, the river Turia flowed through the current site of the park, but was diverted after a big flood in the middle of the 20th century. Since then, there is a huge, elongated park that stretches from the Campanar district in the far west to just past the City of Arts and Sciences in the east. With a length of 9 kilometres, the park is so long that unless you’re an avid runner, you’ll need a bike to see it all.

In the park, you’ll also come across football and rugby fields, an athletics track, playgrounds, fountains, a skate park and many walking and biking paths. In addition, there is even an artificially constructed lake where you can go on a little rowing boat. Fortunately, there are also some terraces to enjoy a delicious, thirst-quenching drink after some physical exercise. 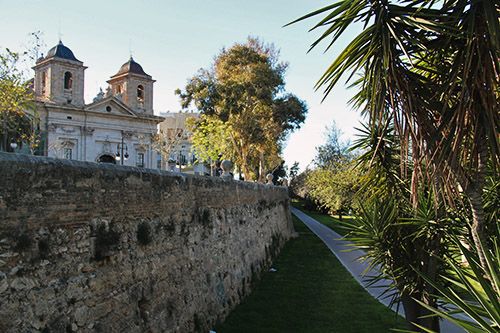 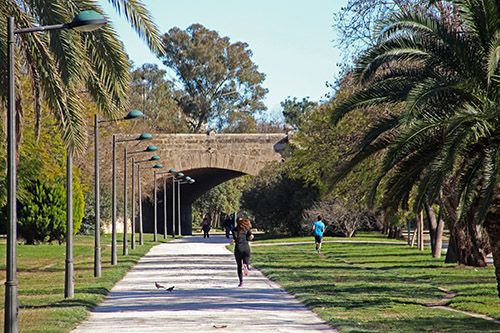 City of Arts and Sciences

One of Valencia’s most special and interesting attractions is the ultra-modern Ciudad de las Artes y Ciencias (City of Arts and Sciences). It is located on the site where the old river Turia used to flow. The city consists of the following seven buildings: 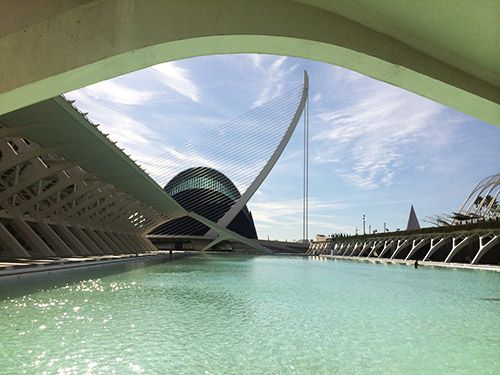 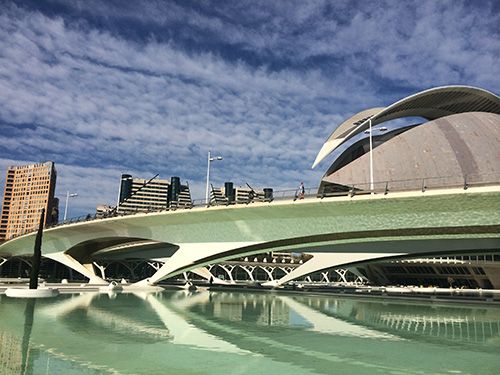 Central to the old city is the Mercat Central (Mercado Central), one of the largest indoor markets in Europe. The market is housed in an outdated, ‘modernist’ building from the 19th century that is currently being renovated. You can find many fresh, local produce such as hams, cheeses and olives, as well as prepared foods including, of course, paella. Your city break to Valencia is not complete without a visit to the Mercado Central!

The many squares of Valencia

In the old town in particular there are many beautiful squares, each with its own charm. Most of them are a stone’s throw away from each other. The square where we think you should definitely go is the Plaza de la Virgen. Besides the Valencia cathedral from the 13th century, the Turia fountain and the basilica from the 17th century, there are many nice terraces.

Less than 150 metres from Plaza de la Virgen is one of the most famous squares in Valencia, namely the Plaza de la Reina. You will find many bars and restaurants, a fountain of course, but also the main entrance to the Valencia Cathedral. Other squares that are worth mentioning are Plaza Ayuntamiento (where Las Fallas, Europe’s largest street party, also takes place), Plaza Redonda from 1840 and Plaza de la Almoina. 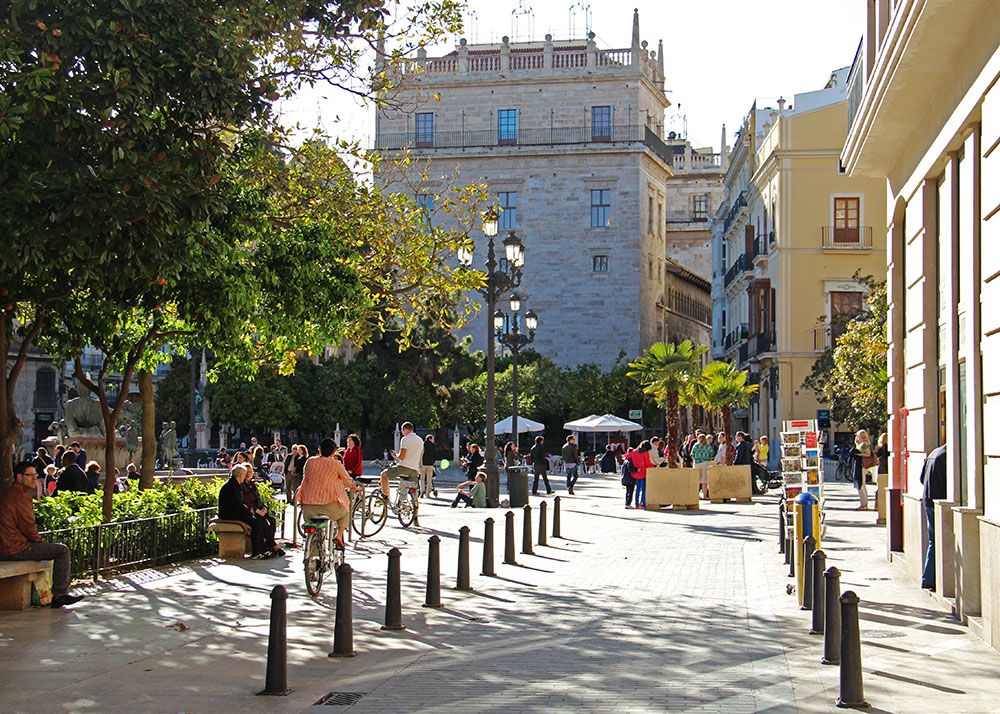 The beach and the marina on the Mediterranean Sea

Despite its location on the Mediterranean Sea, Valencia does not have the beach culture that Barcelona and Marbella, for example, do. This is partly because the old town, but also the other most visited districts, are not close to the beach. However, we certainly recommend taking a bike ride to the beach and the marina! The cycle path through the Turia park takes you past the City of Arts and Sciences to the boulevard. You will find many nice fish restaurants where, even in the cool sun of springtime, it is particularly pleasant to be! 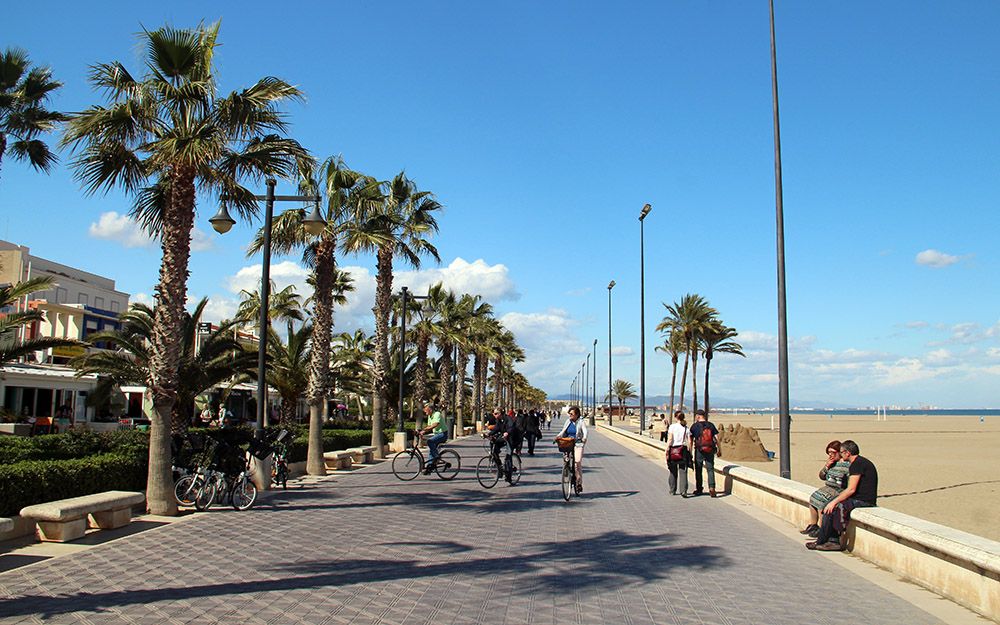 Thanks to the influence of the Mediterranean Sea, Valencia is easy to visit all year round. However, in the summer months it can be very hot, while in the winter months you will definitely need a coat. In the autumn it can rain a lot. In that respect, we advise you to take a city trip to Valencia from March to early June or in September.

When we go on a city trip, we usually choose an apartment and not a hotel. In Valencia you will find a great deal of apartments. We arrived at the fantastic Apartamentos Edificio Palomar in the heart of the city. Ask if the bedroom is located on the street side, instead of on the courtyard because this square is very noisy due to the acoustics. A big plus of the apartment was that they picked us up from the airport and took us back again at the end.

Except for transport to and from the airport, we did everything on foot and by bike. The city has an extensive public bicycle rental network, called Valenbisi. We are not such a lover of this because you can only use the bike at one of over 250 locations. Just a park or museum is a challenge if you cannot find such a location in the immediate vicinity. Additionally, it is always questionable whether there are enough bikes when you return to the docking station.

We think a better option is a regular bike rental company like Valencia Bikes that rents bikes for a day including the lock. That is much more flexible. Public transport is well organised in Valencia. If you wish to use this, then the T1/T2/T3 card is a good option. With this card you can travel unlimitedly by bus and metro for 1, 2 or 3 days respectively. Another option is the slightly more expensive Valencia Tourist Card, which gives you an attractive discount on museum visits, for instance, in addition to free public transport. 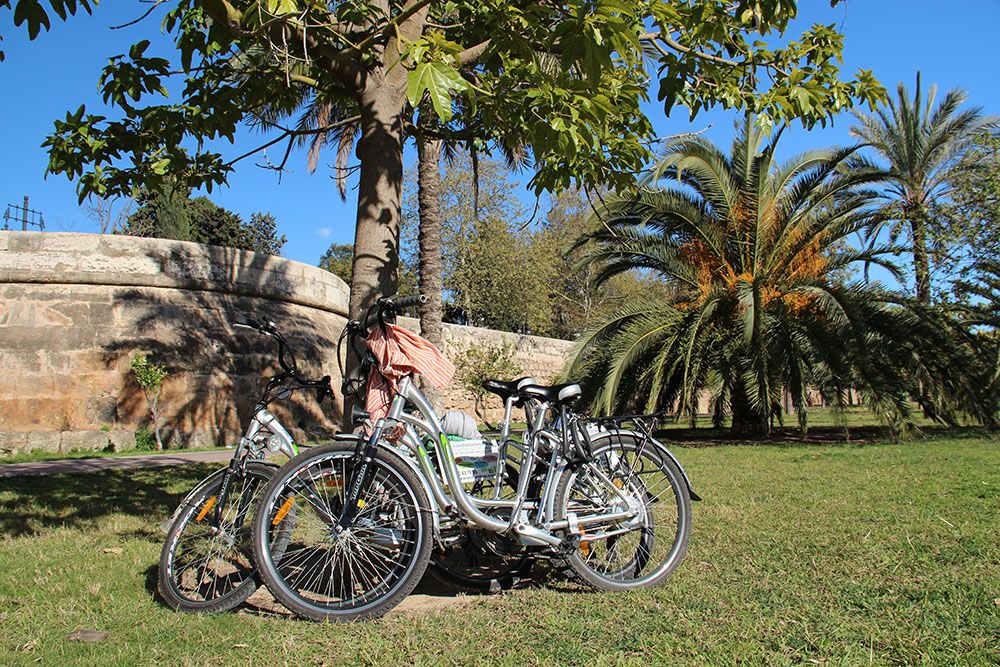 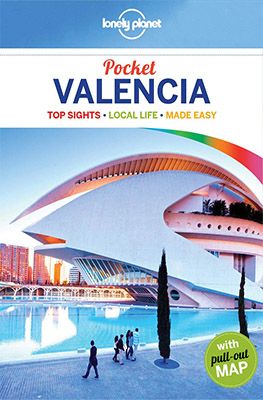 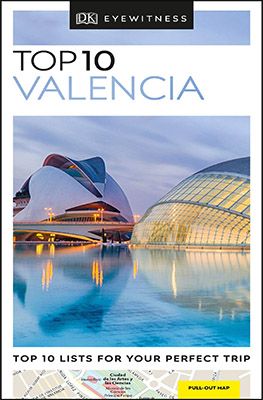